The British had been looking at replacing the Short, Magazine Lee-Enfield No.1 MkIII for some time. In fact from the adoption of the Lee-Metford, the general design had been replaced in general service at least twice and with dozens of minor modifications to boot.

Trials had even taken place to find its complete replacement before 1914, though the outbreak of the Great War (along with some problems with the .276 Enfield cartridge) prevented the Pattern 1913 Rifle from being adopted and issued. For those not familiar with the P13, it was very much a departure from the Lee design.

After the end of the Great War, once armies had begun their conversion back to a peacetime footing it was clear that there would be more SMLEs and P14 rifles than they had any use for and the idea of replacing such a plentiful inventory with yet another rifle built from scratch did not hold much water with the Brass. Doing so would also require political motivation and this was lacking in a war-weary country, member of the disarmament-prone League of Nations.

There were some attempts to bring in the valuable aperture sight, with the added benefit of cheaper manufacturing (the SMLE is an expensive design to produce), though the No.1 MkV of the 1920s proved to actually be more expensive than its predecessor with the rear mounted aperture being quite fragile, though the No.1 MkVI of the 1930s is the predecessor of the No.4, even though it wasn’t adopted (well, sort-of).

As a result, Great Britain and the Empire began WWII with exactly the same rifle as they began WWI. Not an alteration, updated or refined version. Exactly the same. They had even put the magazine cutoff back in place to spite that bit of efficiency saving made during the last war.

However as before, the rifle was still expensive to manufacture and a replacement had to be found. While there were some reserves of SMLEs and P14s (and the US shipping over their unloved M1917s for use with the Home Guard) after the fall of France, Britain needed lots of rifles, fast. 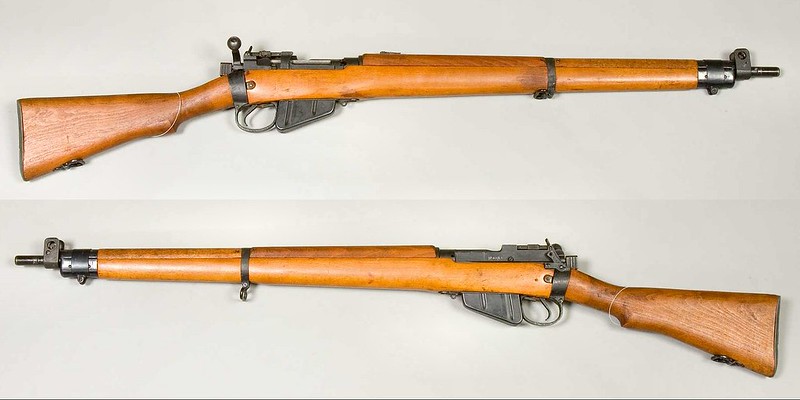 The No.4 MkI was the answer. Adopted in 1941, this design ditched a lot of unnecessary machining on the left side of the receiver and charger bridge and had a simpler stock design. The barrel was heavier and free-floating, meaning greater potential accuracy and last but not least: the aperture sight was mounted on the receiver and was here to stay.

Further modifications were made during the war for efficiency resulting in the MkI* and postwar the No.4 Mk2 (note the change from Roman Numerals to Arabic in 1944) made improvements to the trigger by attaching it to the action itself rather than suspending it from the trigger guard. A number of MkIs and MkI*s were modernised in this way and the buttplates swapped back to brass after the war efficiency saving of zinc alloy models.

The No.4 didn’t make it to the Far East during the War. India and Australia just kept making the SMLE and these were used throughout the campaigns against the Japanese. Postwar No.4s were used in Korea, but by the Malayan Emergency in the late 50s British soldiers were at worst carrying the No.5 Mk1 and much more likely to be seen with the SLR L1A1.

This was a long introduction, but the Rifle No.4 was a long time in coming and it seemed a shame to not cover its long and rich design history. If you want to see the very sexy No.1 MkVI trials rifles you can see them here at Forgotten Weapons.

I am currently building a No.4 MkI from a VSR for a customer, you will be able to follow the build progress here as it is published.