First things first, this uniform is an approximation for airsoft purposes, it’s still a working progress (as any impression should be). It is absolutely not the typical British soldier in several respects, which I will detail.

My reason for putting this load out together was to have something which complimented my M16A1, which really didn’t work well with my WWII British Battledress and 37 Pattern Webbing. I’ll refer to the M16 from this point on as ‘Armalite’, as this was how it was largely referred to by the British at this time.

Contrary to expectation, British forces have used the Armalite rifle since pretty early on. While the Self-Loading Rifle (SLR)* is the iconic British service rifle of the Cold War, there have been roles where the Armalite has been used as an alternative. These fall into two categories:

The majority of the former situation applied only really to Special Forces units, the SAS, SBS and Pathfinders for example. I’ll do these as separate impressions as there are many variations between operations. 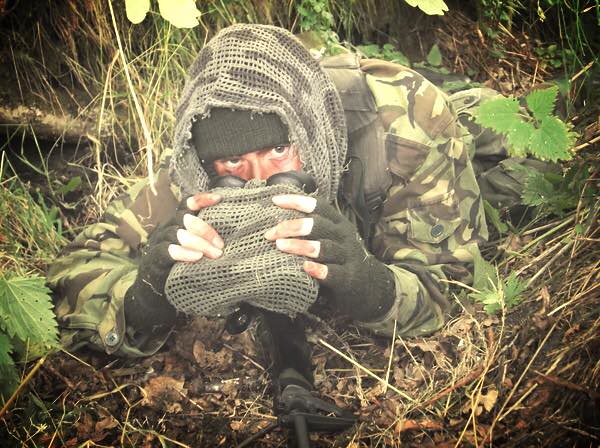 The latter situation applied in a couple of places, Northern Ireland and the Falklands. Although not in every case, some units were given an Armalite for every ‘brick’ (which was the term used for a group of around four men). This was typically carried by the section commander as a little extra firepower, one supposes as an upgrade on the Sterling SMG, which by all accounts was not popular. 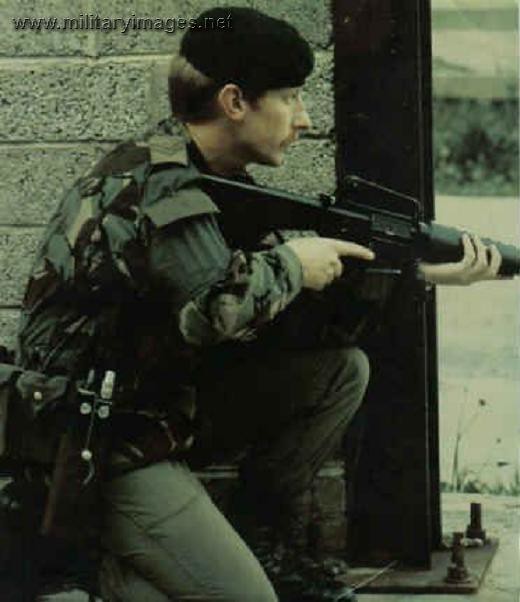 Northern Ireland, as a Corporal, this chap was probably in charge of a brick, hence the Armalite.

The picture above is pretty typical of urban Northern Ireland in the 1970s, at a later date I shall came back and do this load out as well. 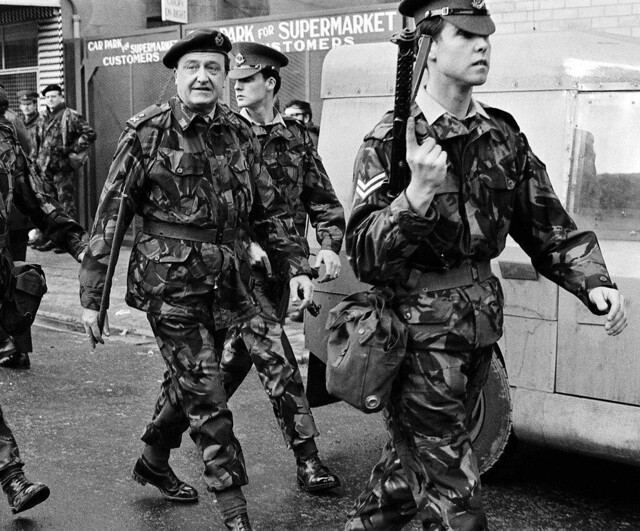 Headgear varied depending on the conditions. Berets were common headgear, comfortable and fairly warm. When patrolling through streets on peacekeeping operations these were seen as more ‘normal’ and approachable than a steel helmet, and certainly more comfortable to wear for prolonged periods.

Steel helmets were often worn with nets and heavily scrimmed, as you can see below, however they were worn without scrim during riots,  replaced with a visor. 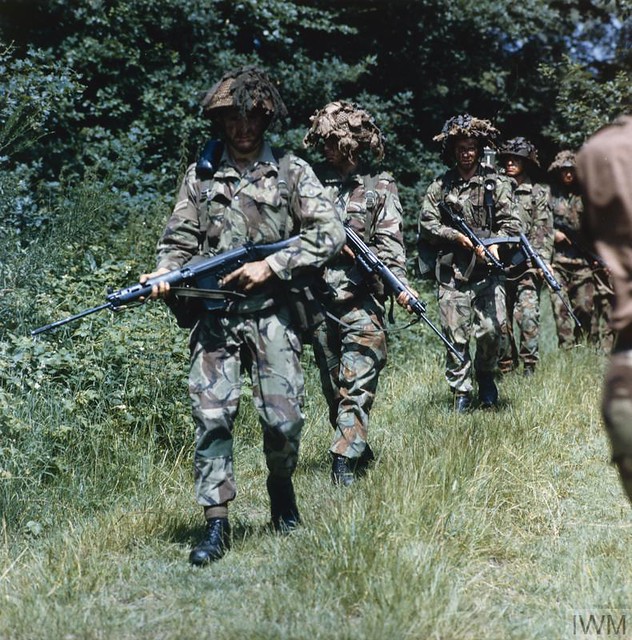 On the feet and ankles, DMS (Direct Moulded Sole) boots were the norm, though private purchase boots were sometimes worn. DMS boots were just to the ankle, so puttees were worn as extra support and theoretically sealing boots against dirt ingress (apparently this is effective against sand). During Second World War, puttees were largely replaced with anklet gaiters, which were much quicker to put on and take off and did not require careful tying. For reasons best know to the higher-ups, after the war the army went back to puttees.

*For those outside the UK, you would better recognise the SLR as the FN-FAL, though locked to semi-automatic only.

This is an approximation for an infantryman not in a frontline role where combat was imminently expected.

On my head, I have a black beret with General Service Corps badge. This is sufficient for now until I decide what regiment to portray. If I wanted to add camouflage to this, loosely folding a scrim scarf over it to cover the colour and break up the outline is historically valid. 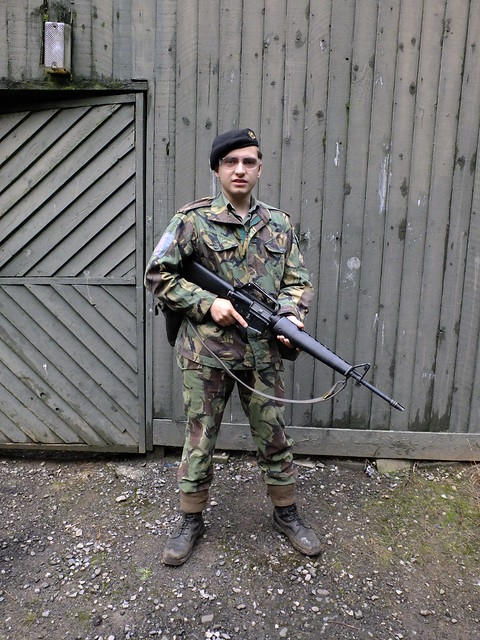 The General Service shirt should, for other ranks, be worn over the collar of the combat jacket. 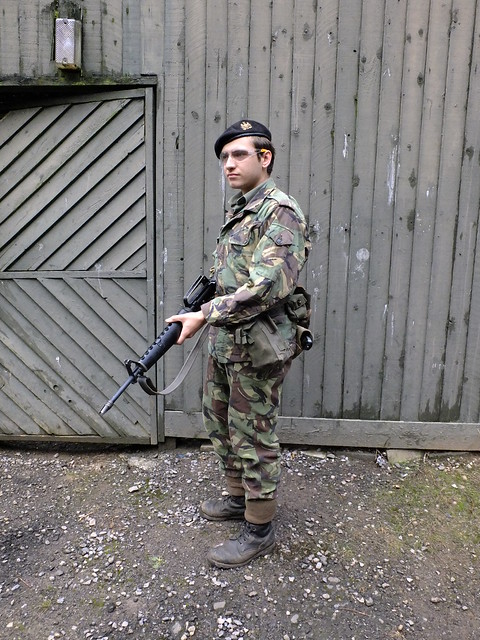 The webbing setup is a light belt kit, as used in Northern Ireland where patrols were not usually longer than a day and threats were within a fairly limited scope. This belt did have a First Field Dressing (FFD) attached with electrical tape for fast access near the buckle. Most of this is 58 pattern, with a few exceptions.

The pouches visible in the photo below are from left to right: Left ammunition pouch (with loops for bayonet), compass pouch, 37 pattern ammunition pouch and holster for .455 Webley (this is of course not standard issue, but when running a sniper rifle in airsoft it is  good manners to carry a sidearm). This will be replaced in time with a Browning Hi-power and suitable 58 pattern holster. On the right is a later-issue S6 gas mask bag. When skirmishing I use this to carry my scrim scarf as a gas attack is unlikely, and it is more comfortable to fall on than an S6. 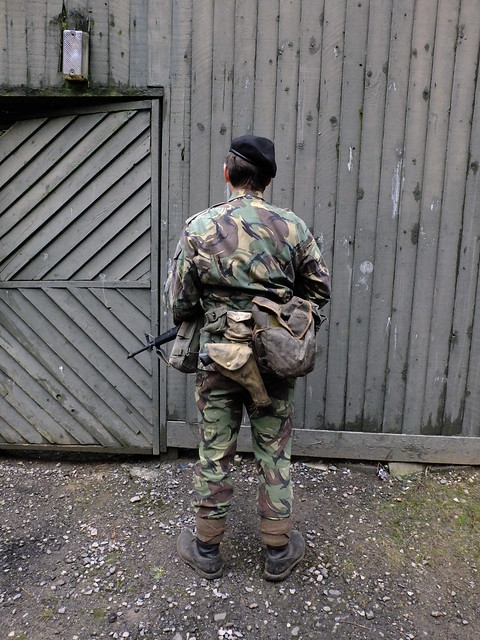 The trousers are the 68 pattern type. Until you have worn these, it’s not obvious to someone who is used to more modern equipment why ‘lightweights’ were so named. These are more closely related to the Battledress trousers of the last war than to modern issue, they are very thick and heavy, supported by braces and high-waisted. An FFD pocket is stitched on the front like battledress. 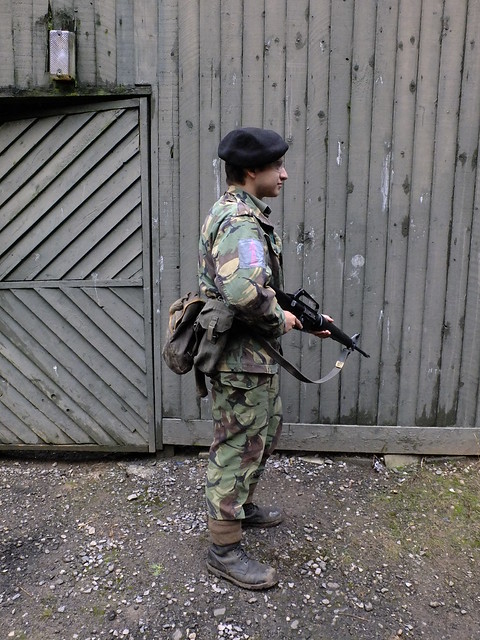 The TRF is a fictitious one, just to complete the look. Under this are corporal stripes that came with the jacket.

In use, this setup is very comfortable in cool, wet conditions. When moving through thick brush and thorns, the jacket and trousers provide very good protection. Even running around quite a lot, I found the clothing breathable and fast drying. I’m yet to try it on a hot day. 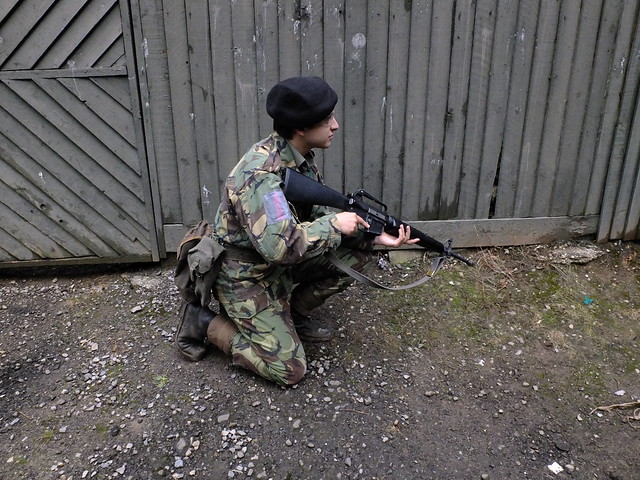 Personally, I am quite fond of the puttees. They provide a little extra support, even with the high-ankle boots. However the trousers do pull out easily, though this may just be that they are on the short side.

With the webbing, it is quick to get magazines out but hard to close in a hurry. I’m producing a set of reproduction M16 pouches to play with to see if they are an improvement. 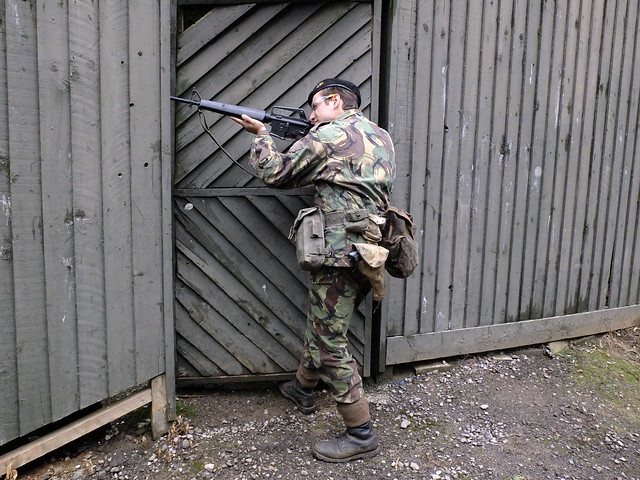 Most of this equipment is not available as reproduction.

In the UK, it is easy to find sets of 58 pattern webbing for next to nothing. Not so long ago people struggled to give it away, but now you can buy sets online easily for £10-25 in worn condition. Silvermans usually has some, and if you want them in brand new they have those too… at a price. They also have some rare trials versions produced in nylon, which was one attempt to make it more suitable for use in NBC warfare.

If you shop around on eBay and collectors groups, you may find it for less.

Berets used in the 60s-80s are much more like modern berets than those used in WWII. A modern one is pretty close, though if you can find a beret with a slightly large crown it’ll look better. With cap badges, make sure they are for a unit/regiment that existed, there have been many amalgamations since the end of WWII.

If you wish to wear a helmet, the MkIV turtle helmet is your best option. You can find them in various conditions from £25-40. A helmet net and scrim is used for anything outside of fighting in built up areas.

For puttees you want the short, ankle type rather than the long, knee-length ones. You can find these on eBay for £10-15 a pair. If you are buying used ones, make sure the ribbons you tie them with are intact. They should be about 70cm long ideally.

GS shirts are available very cheaply, even the most expensive used ones are £7 or so in the UK. At Varusteleka they had some selling for £3 each a while ago. If you can’t find some for some reason, you can also legitimately use ‘Shirt, man’s, combat’ (known as the Hairy Mary), which is a green wool collared shirt. Itchy as buggery, but warm. Nice when you get used to it.

Some soldiers also replaced their issued shirts with US-made ones.

The 68 Pattern outer layers will be the most difficult to find. Looking on eBay will be your best bet, expect to pay £15-30 for trousers and about the same for a jacket. Absolutely DO NOT FORGET to buy a pair of braces. Grey elastic and leather braces as issued can be found for £5-10. Beware of retailers selling items as 68 Pattern when they are not, later patterns of DPM are darker and with chunkier splotches. You can avoid wasted funds by comparing the offerings to the patterns on Camopedia.

Scrim scarves of this era are two-coloured, a sort of weak green-black or green-brown, almost blue-tinted. They are found on eBay, Web-Tex make a good version.

Your options for a typical British Soldier are reasonably broad for this era.

Ares produce an L1A1 SLR replica which I’ve heard many good things about. You can get it with a wood stock for early impressions and it comes with black plastic as standard.

There are of course countless AEG M16A1s that would be suitable and endlessly modifiable. My M16 is a WE gas blow-back, with modified nozzle to remove the locking lugs (which cause no end of problems) and flat hop.

If you want a sub-machine gun, the Sterling was widely used by those in support and command roles. It was also widely detested. Airsoft versions seem to have a custom gearbox so be prepared to modify standard parts for repairs.

This was the standard sniper rifle of the Army from 1970, taking over from the No.4 (T). It was a re-chambered No.4 to 7.62 with a new magazine and the No. 32 scope modified for the new cartridge. You can see the progress of the L42A1 being made here at VA.

Side-arms were not issued as standard to British forces, they were for support, command and special forces types. However for Airsoft it’s considered good manners to carry a side-arm if you have a rifle running above 350fps. You can carry a Browning Hi-power in a 58 pattern holster or a revolver as I have. Privately purchased pistols were carried, though frowned upon, bans being enforced more or less depending on circumstances.