Thos of you who have followed Vintage Airsoft for some time will recognise this and be like: “Is he STILL working on that?”. Well, yes. I swear if something could go wrong on this build, it did. At least once.

So, here’s hoping this is the last build post at long last!

One of the problems was the air seal between the gearbox and the hop unit. This it turned out was caused by flex between these parts, resulting in variation from shot to shot.

In the end, I re-designed the mounting plate to feature a hop-up ‘vise’ to hold the unit in place really solidly. There isn’t any wobble in this sod.

I had to make a few mods to the trigger unit design and the bottom of the baseplate to work together, but now the trigger raises a sear which sets off the microswitch in the gearbox itself.

In place, clamped down! I’m still using the same feed system as before. 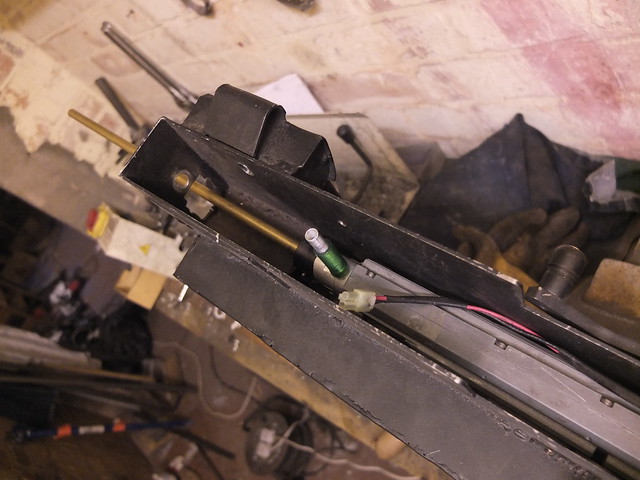 The feed tube comes out to meet the magazines. 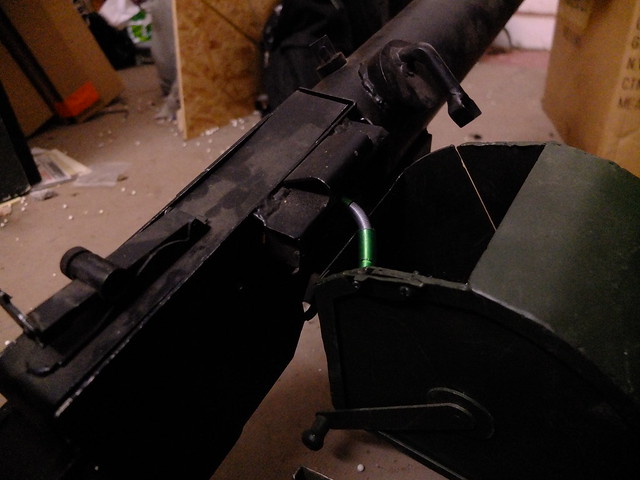 Oh yes, new grips. I wasn’t happy with the old ones, one wasn’t quite spot on, but as with all things the second attempt was much better. I’ve used hardwood this time (as opposed to laminate) and cut in cross-hatching for grip. 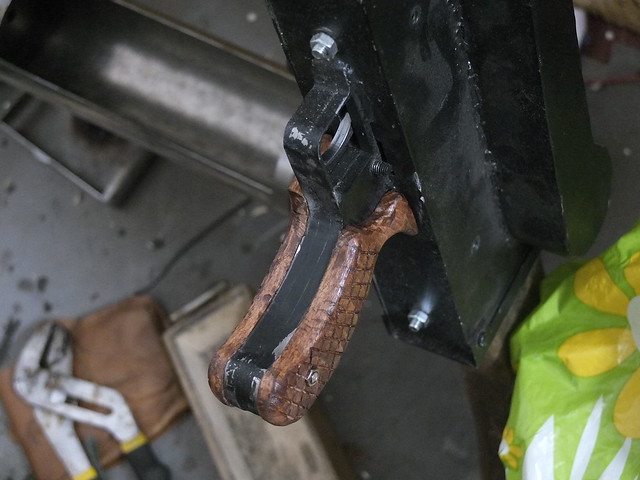 Topping up the paintwork. 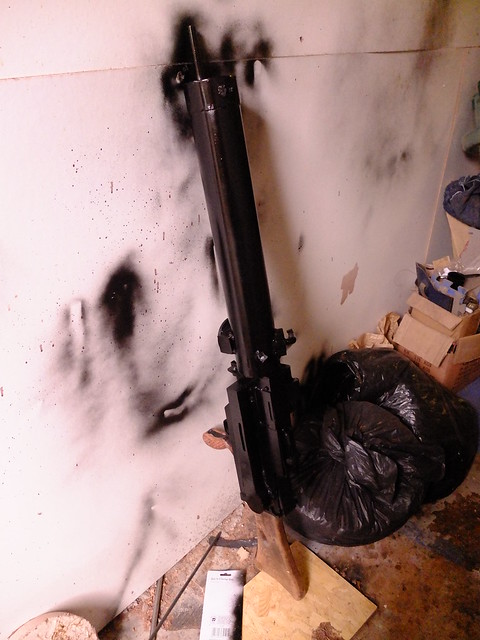 I’m really looking forward to having the finished photos on this at last.

This buttstock is strongly based on the model available for the original Webley MkVI.

The stock is made entirely of steel and real, solid walnut.

The steel is oil blued and the wood has been finished with danish oil, followed by a protective layer of hardwax oil.

The only real aesthetic improvement would be to make the remaining standard grip a brass colour, which it was with the original when the buttstock was attached.

If you would like a stock like this for your own or you have a great idea for an accessory, drop us a line on enquiries.vintageairsoft@gmail.com to discuss or get in touch on Facebook!

Those of you who have been following Vintage Airsoft for a while know that the Webley MkVI is a firm favourite. So far, we’ve made replacement shells, shotgun shells and added a hop unit.

There are still a few accessories to complete however, namely the removable butt stock which allowed the pistol to be used as a carbine and the Pritchard-Greener bayonet. The latter of these are rare, with no recorded use in combat, the former however was common enough.

The practice of producing a butt stock to fit pistols was commonplace among manufacturers from the introduction of revolvers. It allowed the shooter to make the most of a pistol cartridge out to ranges that would be quite difficult to achieve useful accuracy by hand only. A more commonly recognised use of this idea is the Artillery Lugers, issued by Germany to troops not wanting the bulk of a full rifle but needing something easier to use than a pistol. Essentially, this is the fore-runner to what in current Western parlance is called the PDW or Personal Defence Weapon.

Firstly, a digital design to work out what needed to go where. This could then be printed out to check the proportions were correct.

This would then be converted into steel in a batch of laser cuttings.

It is made up of three layers to make the shape without having to perform milling operations. The thickest inner layer (4mm) is chamfered on both sides around most of the length to allow deep penetration of the joining weld.

You can see in the photograph below the two screws full-length protruding from the grip. These run through two corresponding holes drilled in the butt of the pistol itself, which is the only modification required to fit this unit.

These, along with the excess weld can be ground down to a smooth finish. It can then be laid out on the wood for the stock and drawn round, using the screws at the back as reference points. The excess material can then be removed.

Once the parts were all in place, they could be separated and finished. The surface of the metalwork was gone over with a sanding drum for a smooth finish, then slightly oil blued to achieve a similar finish to the original.

The walnut stock itself took a thick coat of danish oil. Several more will be applied before it is complete along with a coat of hardwax oil to give it a tough, wear-resistant finish.

If this post has inspired you to want a custom gun of your own or has given you a great idea for an accessory, drop us a line on enquiries.vintageairsoft@gmail.com to discuss or get in touch on Facebook!

A quick video to show you what this gun shot like prior to a couple of improvements!

It was a little inconsistent, though bear in mind that this is without the hop set at all. There are several improvements that have been made since then to improve consistency and power.

Firstly, a large, stiff spring holds both the outer barrel and the hop unit in place against the gearbox.

At this point, it became apparent that having quick-replacement magazines is a bit pointless as any magazine for this gun will be a high-capacity one. As a result I dropped this idea and went for the far more secure (and better feeding) fixed version.

This can still be swapped between an electronic hi-cap (stored in an MG42 ammunition box, as used in WW2 with the MG08/15) and a smaller hi-cap that can be stored in the drum itself.

A drum magazine lock was added to stop the drum from opening unexpectedly. The crank handle on the original was used to wind in the cloth bullet belt. It is fixed on this and the sides of the spindle hold the magazine in place.

The details on the water tank, filling cap and steam hose connector.

The small magazine attachment for the drum magazine. This attaches to the top of an M14 magazine.

A top-up of paint to get it pretty before testing!

The elevation adjustment and rear sight.

If this post has inspired you to want a gun of your own, do drop us a line on enquiries.vintageairsoft@gmail.com to discuss or find us on Facebook.

The AGM Sten comes with a hex head screw to attach the stock, which also contains the battery compartment.

This has three disadvantages:

That’s right, it looks so bad it is worth mentioning twice. Fortunately this is easily fixed! The fix Vintage Airsoft offers also means that you can change the battery without any tools at all.

This piece is all-steel in construction. The edges are knurled for grip, meaning that the replacement screw can be fitted very tightly with just finger strength.

The corners are taken off for comfort of use.

The whole piece is oil blacked, which means it has an extremely wear-resistant finish that nicely matches the original painted surface of the gun.

You can buy this very handy piece on the Vintage Airsoft Etsy page For a very reasonable price.

If you like this idea, find us on Facebook for more related content. If you have an idea of your own you would like to see made, do drop us a line on enquiries.vintageairsoft@gmail.com to discuss.

So, this is what the MG08/15 looks like now! As you can see there are a few changes. The main development of importance as far as I am concerned is the addition of the bipod. This gun finally stands up on its own!

A close-up of the bipod mount in progress. A series of disks keeps friction to a minimum. I was thinking of using 6mm bearings but it runs smoothly as-is. Given the gun will be used in (very dusty) South Africa I reckoned on simpler being better.

The bipod itself is folded 2mm steel sheet. Designed in CAD and laser cut, I folded it by hand. I’ve never been so hot in the workshop! This was then welded to the bottom of the pivot mechanism.

Woodwork is the other obvious development. Took delivery of some lovely Trend router bits that I have had my eye on for some time and set to work on the buttstock (rough cut above).  Using the convex curve of a Roman Ogee bit I rounded off the faces other than the front and back.

Curved faces and Roman Ogee bit in the router.

Another treat in the delivery: These rubber sanding drums fit in a standard drill chuck. A left hand thread puts pressure on the rubber to hold the sanding cylinders in place. Once you get used to setting them up, these are really effective for sanding large curved faces and even small flat faces.

Now I just need to get the finished buttstock to match the staining job on the pistol grip covers!

Still to go: I need to fix up the feed mechanism. All the components exist, they just need fettling to get them all working together smoothly. Then attach the ports (in and ejection). With that it will be painting and testing!

If this has inspired you to want a gun of your own, let me know! Drop me a line on: enquiries.vintageairsoft@gmail.com, I’d love to hear from you!