The Webley Mk VI .455 service revolver is an awesome bit of kit. It is the iconic sidearm of British and Empire forces during the Great War.

Incredible stopping power, six shots in single and double action and very handy used as a club. What could make it better? A bayonet of course. 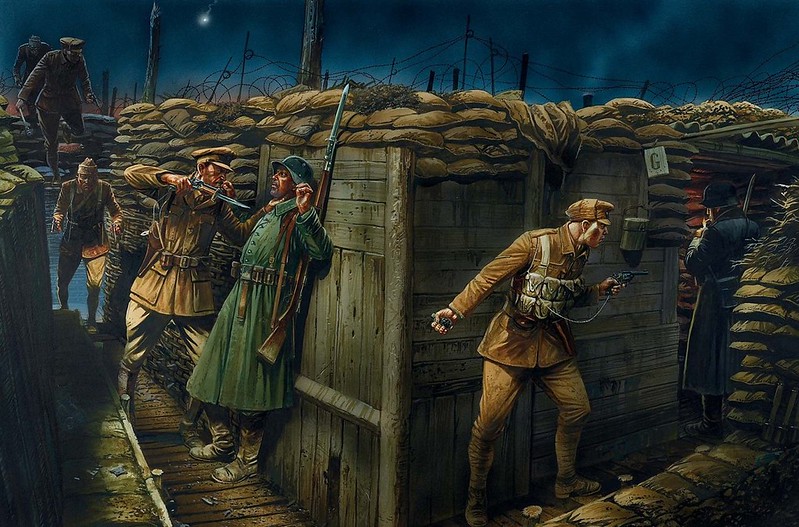 Arthur Pritchard enlisted in 1915, was commissioned as a 2nd Lieutenant in the Royal Berkshire Regiment and rose to Captain by Armistice. In late 1916, Pritchard approached Wilkinson and their cutlery division produced a prototype (using the tip of an 1897 Pattern infantry sword). However Wilkinson’s factory was at maximum capacity producing bayonets and Cavalry swords and were unable to put the production time aside for this exploratory project. 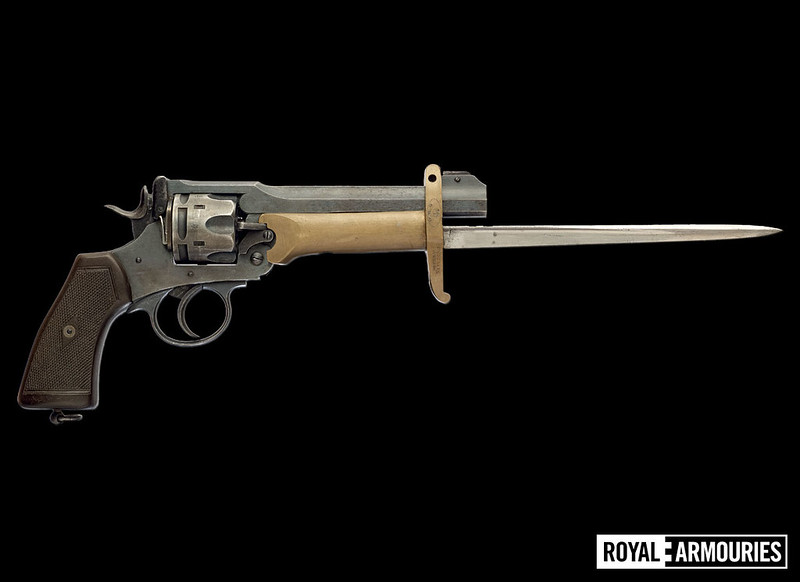 Pritchard then went over the road to Greener, a long-time competitor to Wilkinson, who had the time and facilities for the project. As 97 ptn. swords were still technically in service, cutting just the tip off for use in this wasn’t really efficient. However Greener did have a respectable supply of disused Gras bayonets purchased from France which made an excellent replacement.

This design was patented and sold as a private purchase item. This was never issued, nor was it designed to be used alongside the slightly more common carbine stock, in spite of suggestions made by the ill informed to both. The maximum number confirmed produced is 144 by serial numbers, though some confirmed originals have no serial number. It is fair to say that more replicas have been produced than there ever were originals. 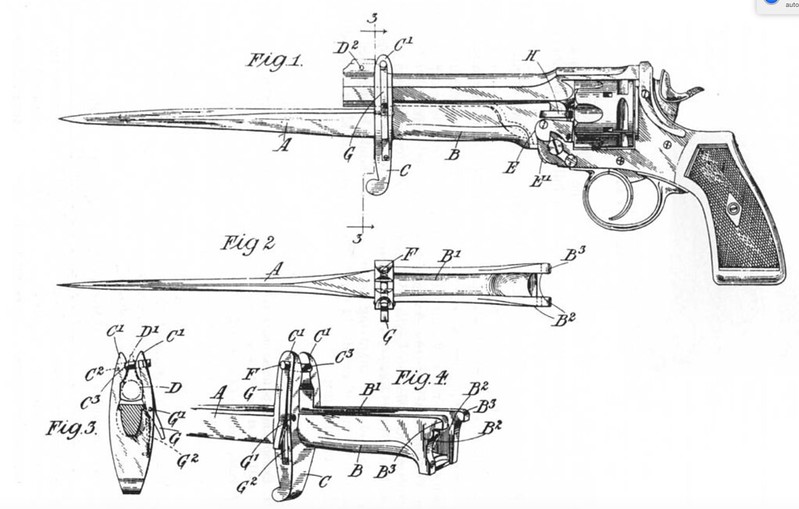 Anyway, I’ve been working on a replica for a long time, trying to work out the best way to produce an airsoft safe one.

When I started, I made parts by hand, but this wasn’t practical for producing an accurate replica with so many curves. 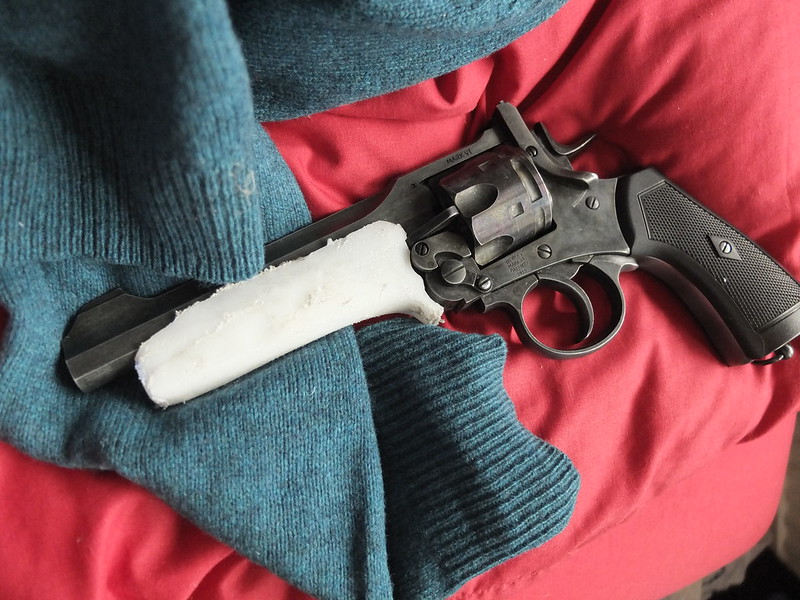 So I drew out a 2D design and commissioned a friend to make and print a 3D model (this was before I learned 3D modelling myself). 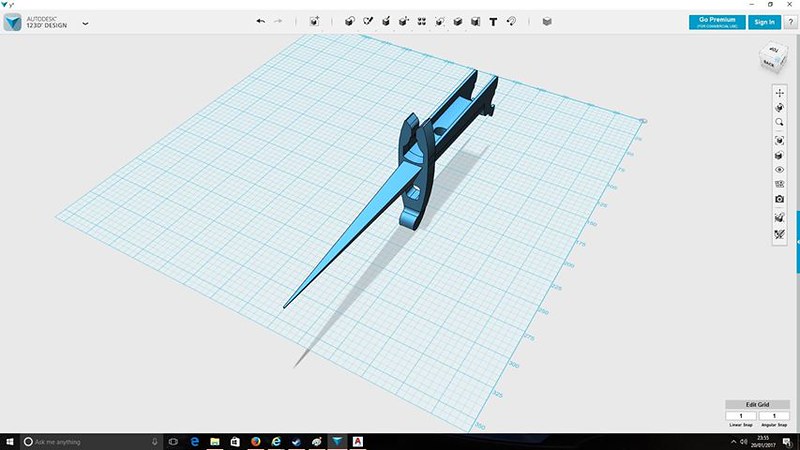 Once printed, I sanded it down to a smooth finish. If I were doing it again I would use filler paint as I do now on my other 3D models as it would give a nicer finish. 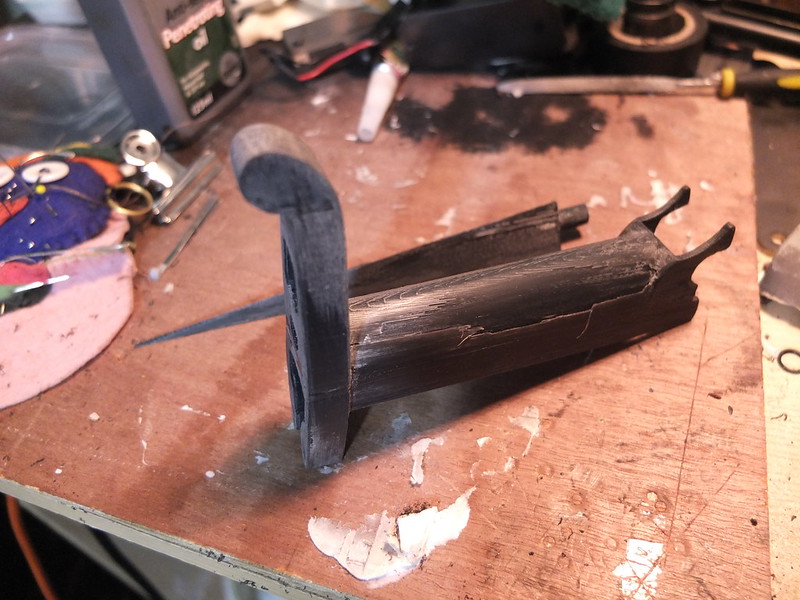 As per the original, this needed a little hand fitting to the gun. I knew it wouldn’t be perfect on the first attempt with so many nooks and crannies. 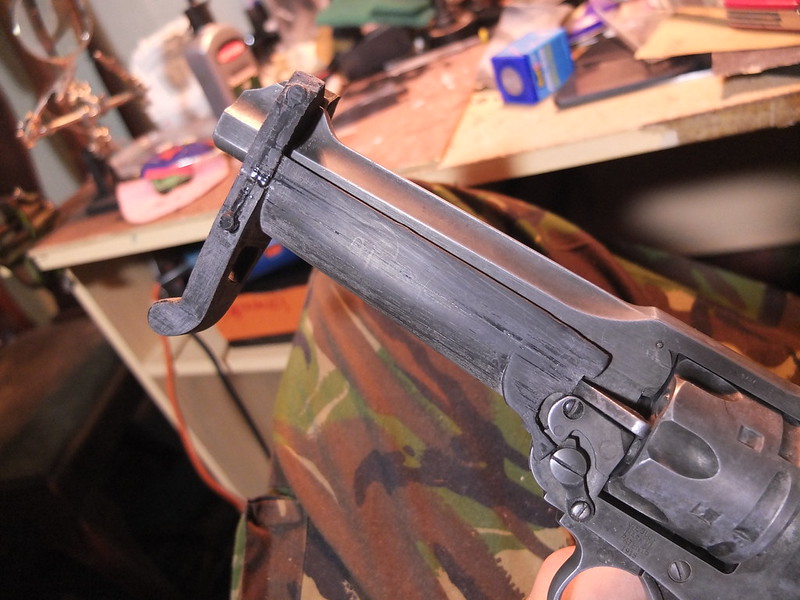 Once fitted, I could paint up, the base coat silver before painting the handle in a brass top coat. 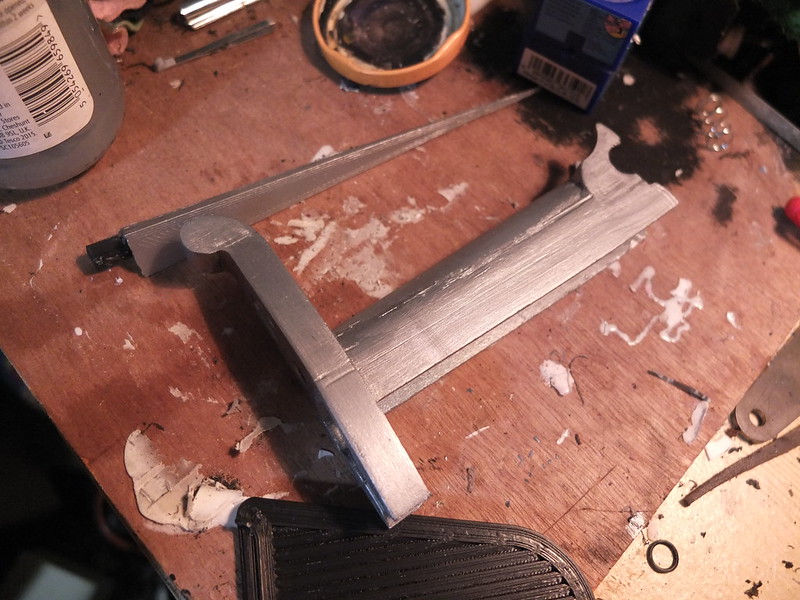 In place on the gun, it is taking shape. 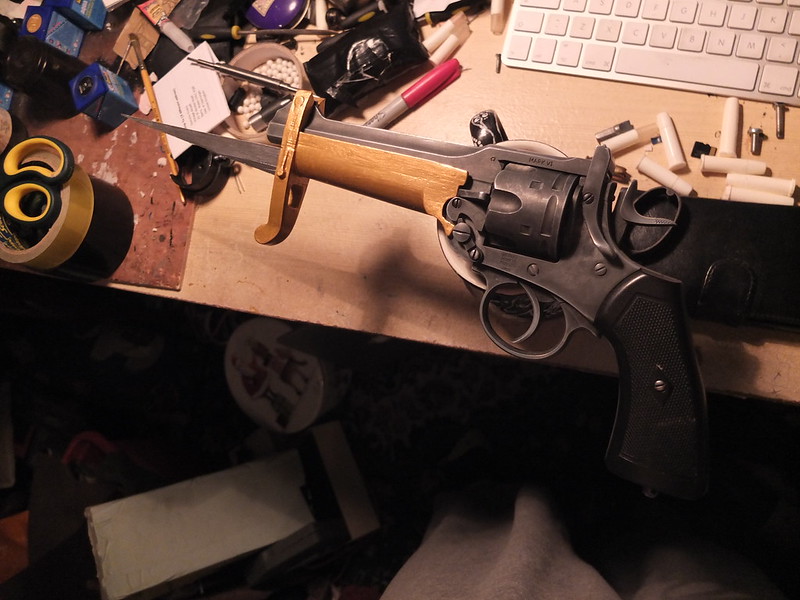 Once nice touch of the Pritchard is the sight picture it gives you. You may still use the foresight blade for precision but for snap shooting you can just drop your target in the ‘V’ and pull the trigger. 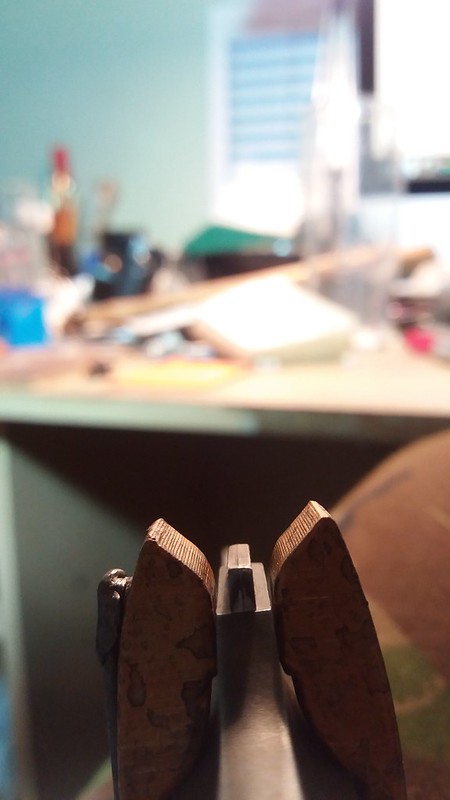 I added a little detail to the locking catch to replicate the chequering on the button. 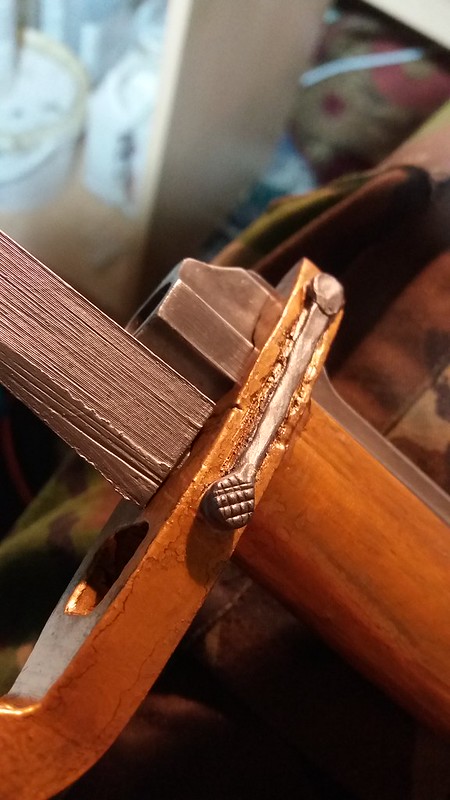 I made a new blade in steel that is a more authentic shape, which really improves the look of the thing. To make it safe I shall make a rubber mould and cast blades for customer versions. The grips will have to be 3D printed as they will be a bit awkward to cast. 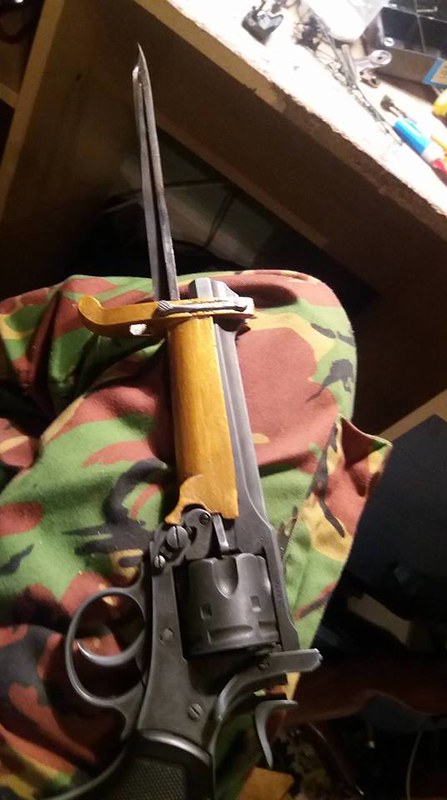 So the next post ought to be a finished piece!

If you would like to see more builds from the Great War era, you can find them here.

Don’t forget you can buy some of our complete products via Etsy.

The Airsoft Pritchard-Greener is finished, after some significant time!

I’ve been looking forward to this for so long, I can’t wait to use it in the field. 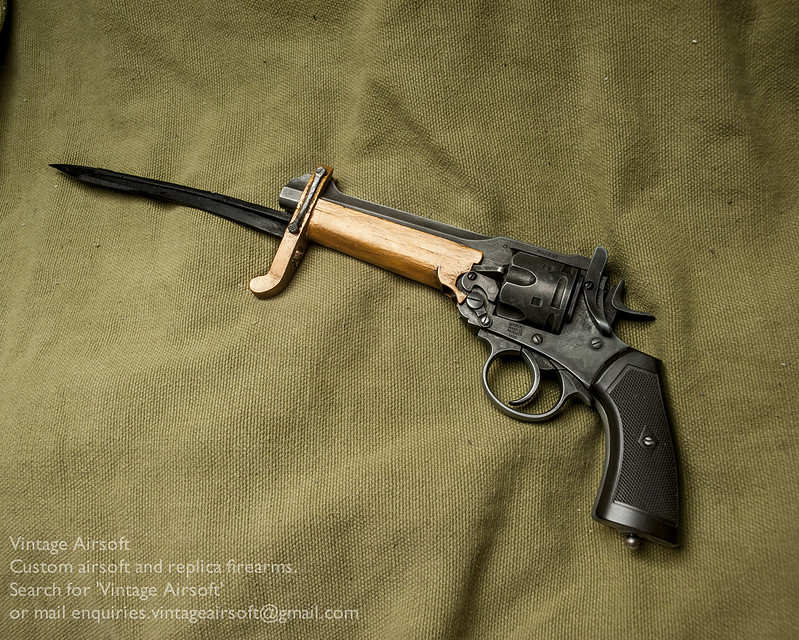 This one is mounted on my trusty old Wingun. The rubber blade holds its shape well, but like my knives is soft enough to be safe to use on people. 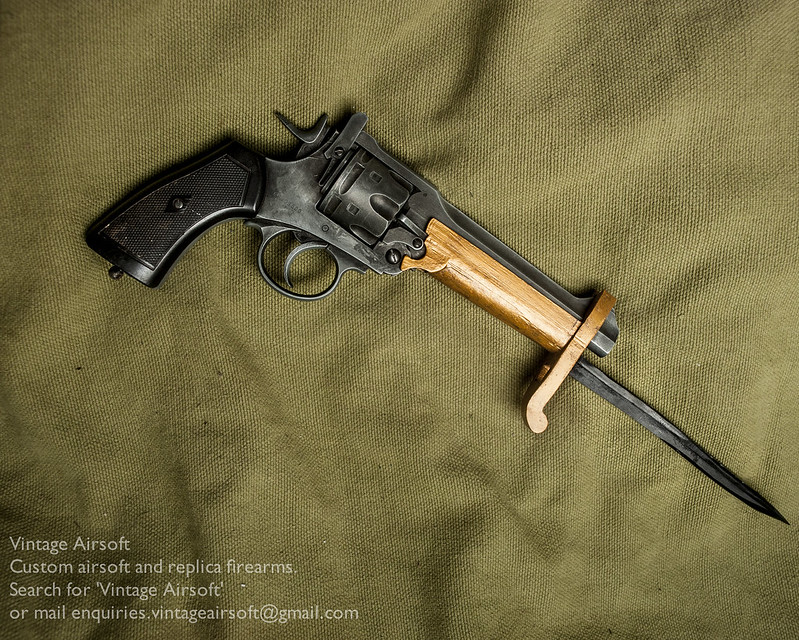 Although there is no locking catch on this, the friction of the holding spring and the close fit keep it securely in place. 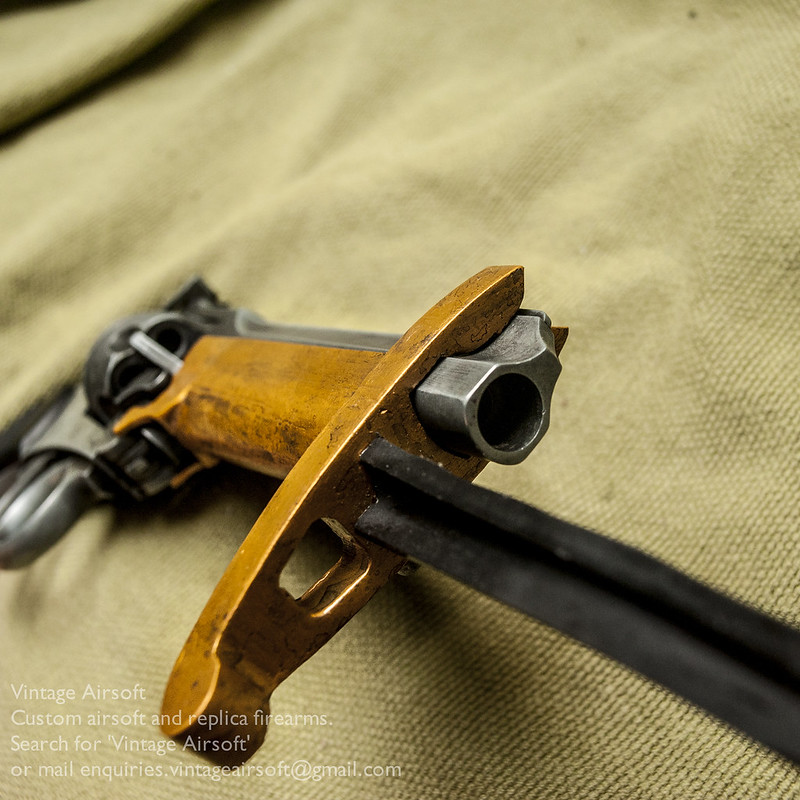 As mentioned in the build post, the sight picture of this is excellent. That deep ‘W’ shape is great for dropping people into and firing. 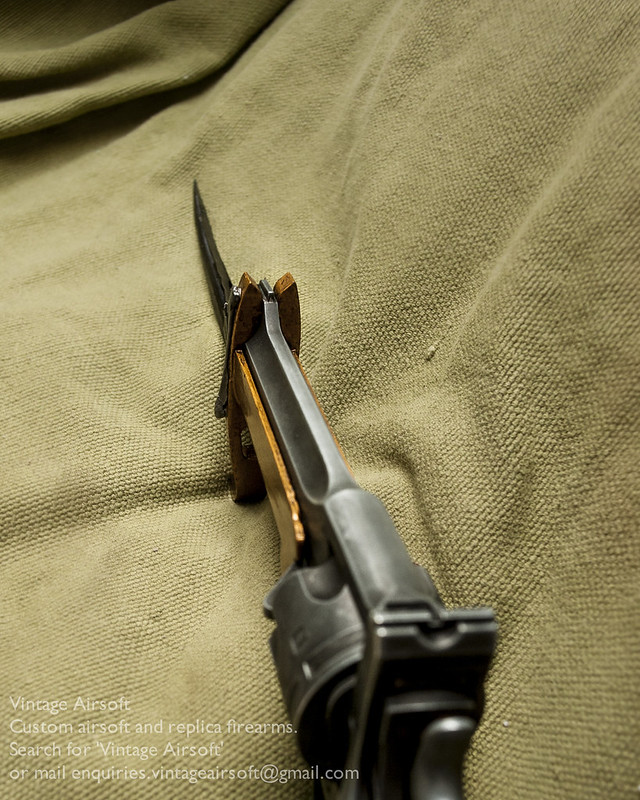 And like the original, the revolver can still break open to reload. 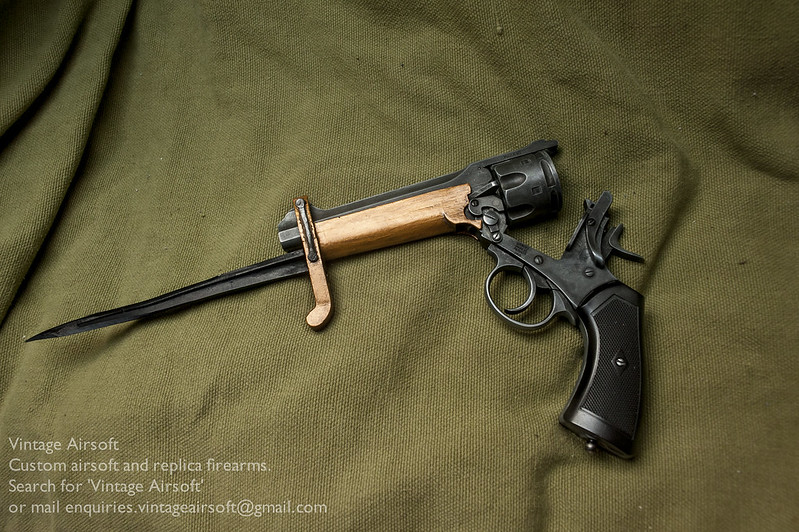 You can find the build and history post here.

If you would like to see more builds from the Great War, you can find them here.