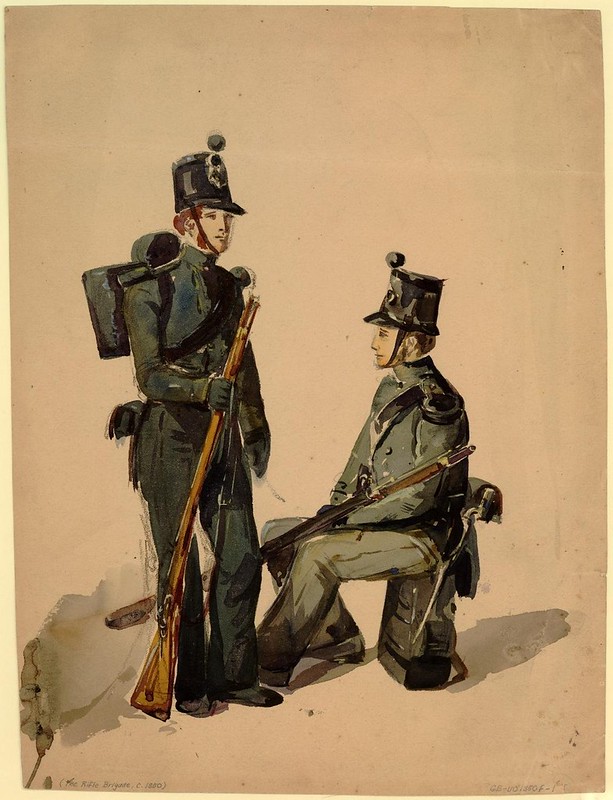 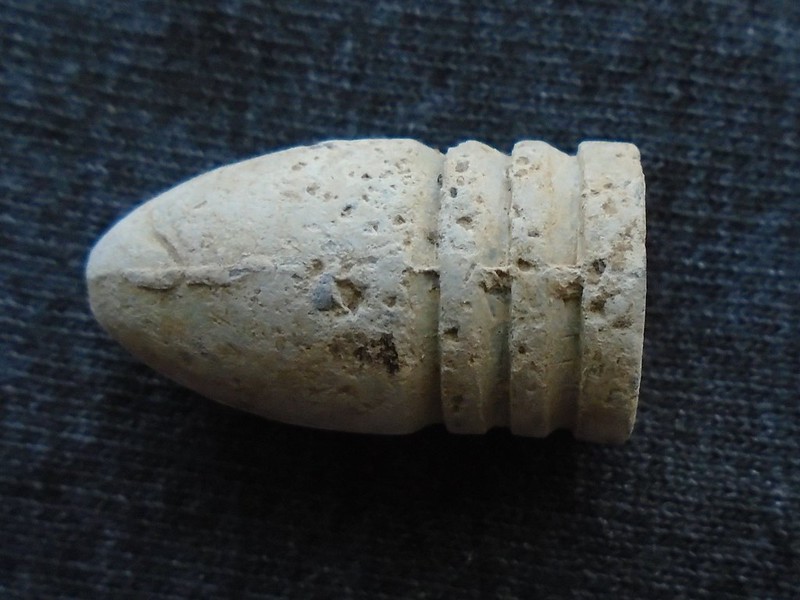 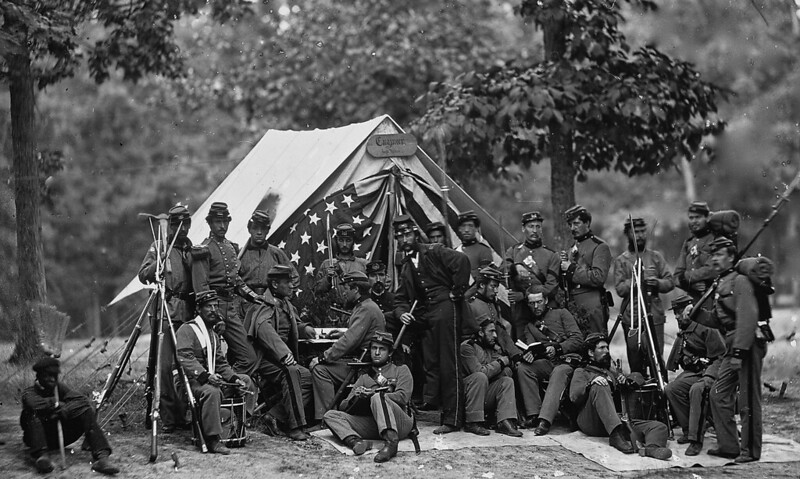 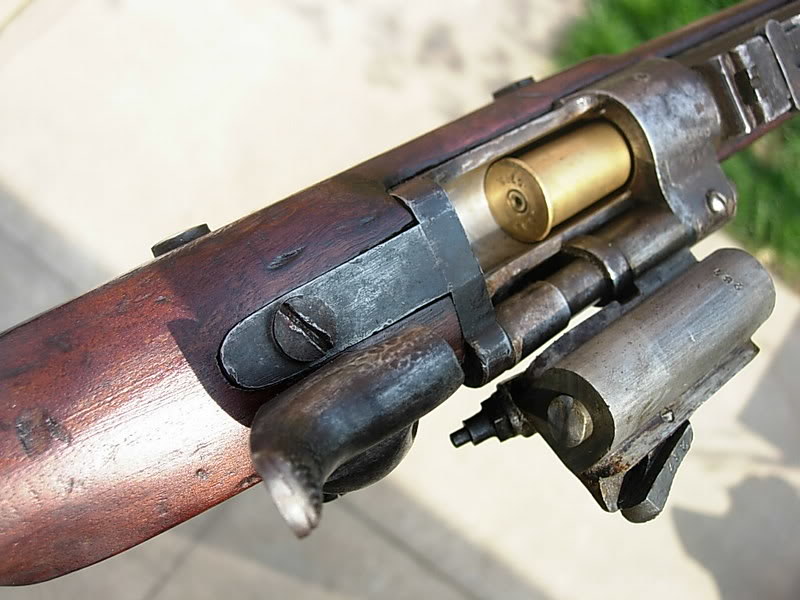 When I talk to people about the idea of 19th Century Airsoft, the overriding response I get is: “Why would I want to stand in a line, in a field, and be shot at?” This is not an unreasonable question. This would be a very tedious day of airsoft.

It is also completely unlike the day of play we had. This game day was one of the most dynamic and varied I’ve ever had. I won’t give an in-depth blow-by-blow account of the day, but I hope to give some idea of why this style of play is worthwhile and highly enjoyable.

When it comes to historical airsoft, one major concern is that if you turn up to an event you’ll not have the right kit and be looked down on. The group shot we took at the start of the day will give you an idea of the level we’re aiming to start off with. We had no-one with 100%, truly authentic historical repro kit. What we did have was a bunch of guys who did the best they could with the kit they had. 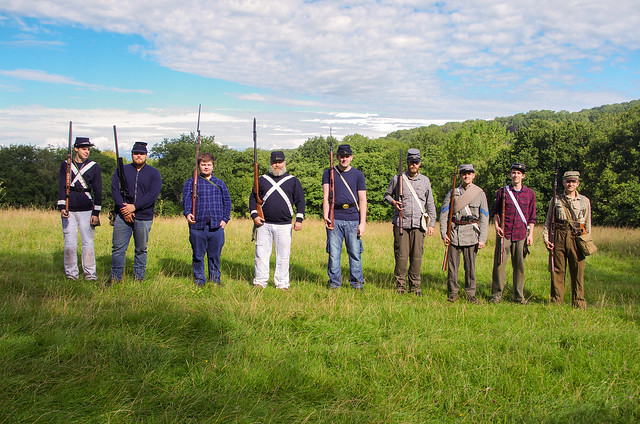 On the Union side, we had a mix of jeans and decorator’s trousers with blue shirts and tops.

On the Confederate side, a couple of the guys wore WWI/II German trousers, one a pair of green civvies and I wore a pair of British 49 pattern BDs. For the top I wore a cotton khaki shirt, the other guys wore either old grey uniform jackets/shirts and even a red cheque. We used a mix of satchels/belts and leather pouches to carry ammunition. The only period-specific equipment we had were the Kepis, which are pretty inexpensive to buy. I made my own Kepi from canvas, I’ll be making another from felt and may even offer a sew-your-own Kepi kit.

Airsoft gun wise, most of us used bolt-action rifles. Several guys used the stock, basic, unadulterated VSR knockoffs that sell for about £50-60 on the continent. They got kills with them too, using iron sights at the ranges we were playing at (typically 20-80 yards) they are perfectly usable. There are also rules for AEGs and gas guns, but if you are able to buy or borrow a bolt-action I would recommend it as it is a much nicer way to play. 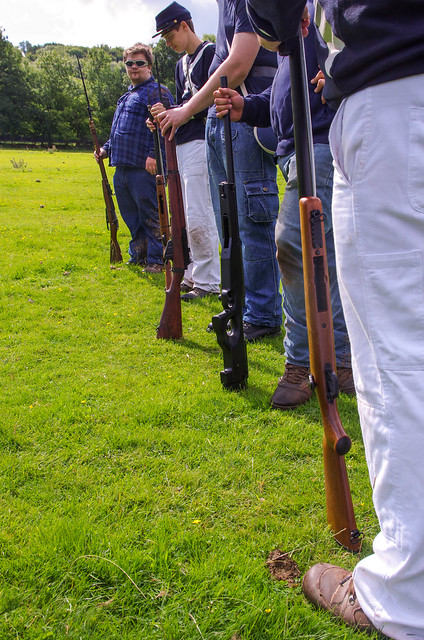 Enough on kit for now. Let’s talk about game play. We headed off to the first game start point. It was a simple attack-defend points game, the Union had two spawns, Confederates had one. 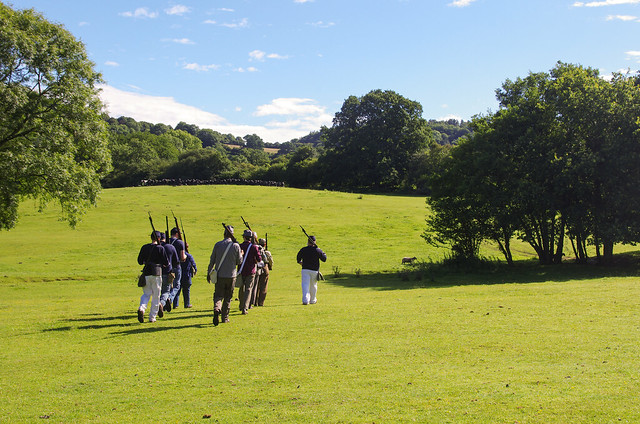 The Confederate spawn was slightly uphill. The Union forces pushed through the trees, while we Confederates went further uphill and took the ridge. We put fire into their flank, taking out a couple of guys. At this point I was killed, but being in the middle of the battle area I could watch the events quite well. The Union took our spawn, pushing round our left. However their spawns had been left entirely unguarded and a couple our guys came round their rear, took the spawns and shot the Union out from behind. 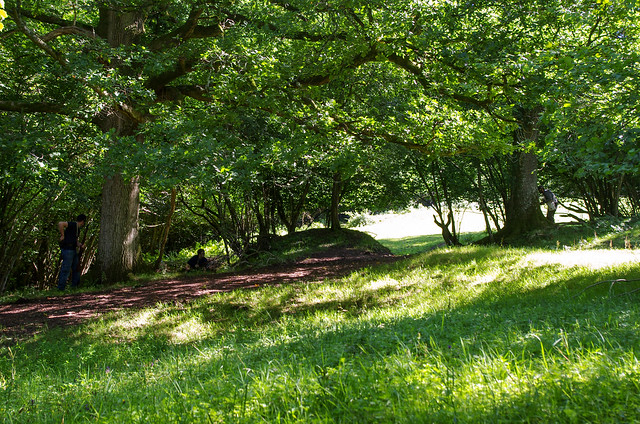 We then played a couple of games running through the village. On the face of it, the defenders should have the advantage when they have cover and the attackers are covering open ground to assault them. In reality, due to the controlled rates of fire, the attackers can fire and move from cover to cover with a minimal chance of being hit. In the meantime the defenders can only hold a certain position. For some time, I was in the building in the picture below duelling the guys in the next picture. 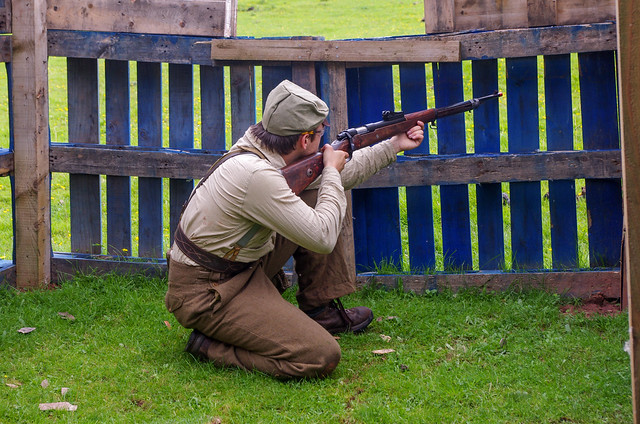 These guys (Ryan, left and Kim, right) kept me pinned for several minutes. Another of my team was going in on their left while two others were taking a spawn behind them. In the end, their undoing was Ryan advancing on my position, taking a couple of shots from close range in cover before being forced back and shot in the back as he retreated. At this point Kim was left on his own, with 3-4 guys coming at him from all sides all firing at his building and he attempted a retreat to the next building, which had more open ground around it so would have been harder to attack. Unfortunately for him, 2/3rds of the way across I let a BB fly and it curved beautifully into his hand. 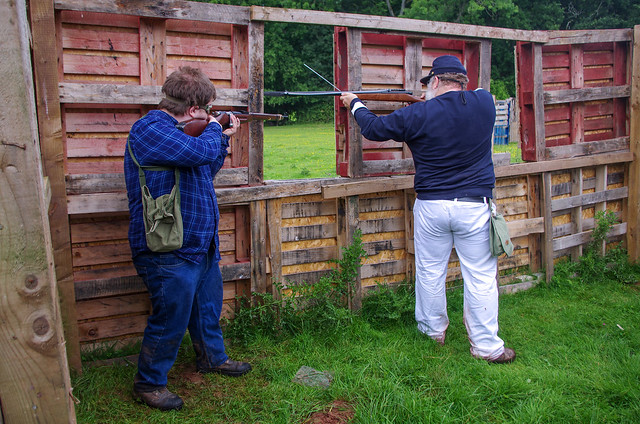 That’s the beauty of this style of gameplay. If you want to hold a position, you need to stick together and work together. There’s no chance a single person can keep a whole team pinned with a flurry of automatic fire in about the right direction every now and then. Fire and manoeuvre is needed and actually has a chance of working without the unlimited ammunition and rates of fire in a normal skirmish.

The next game was a sort of collapsing defence game. The Confederate objective was to push through and clear a corridor of Union Spawn points. Once a spawn was taken, it could not be retaken, but the Union were able to advance as far forward as they liked. 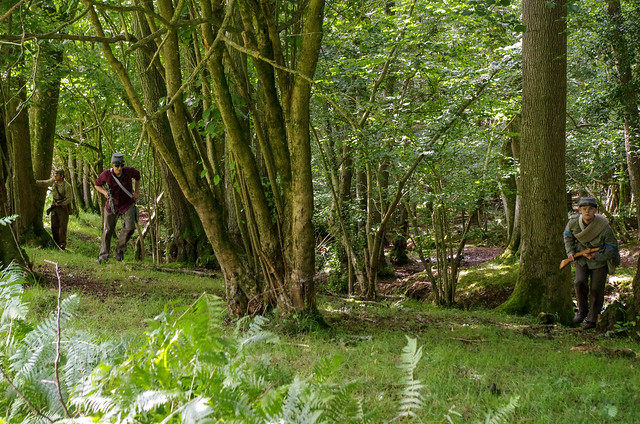 The result of this was that although the Confederacy took each spawn, we were brutally flanked and taken from behind a couple of spawn points in. 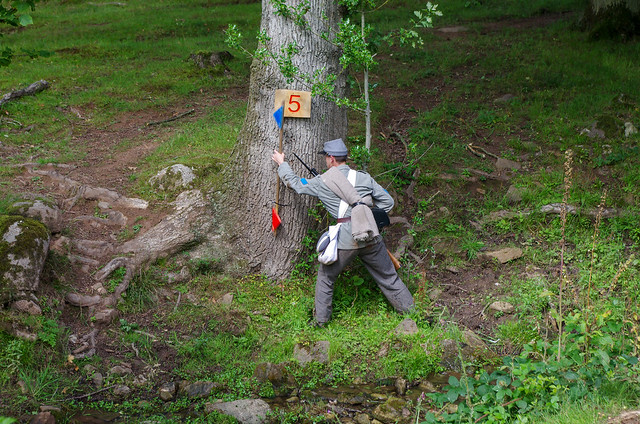 This series of pictures really drives home what’s special about this gameplay. It is not staged. I had charged, noisily round the left of the fort to draw fire and attention away from my Confederate buddies. 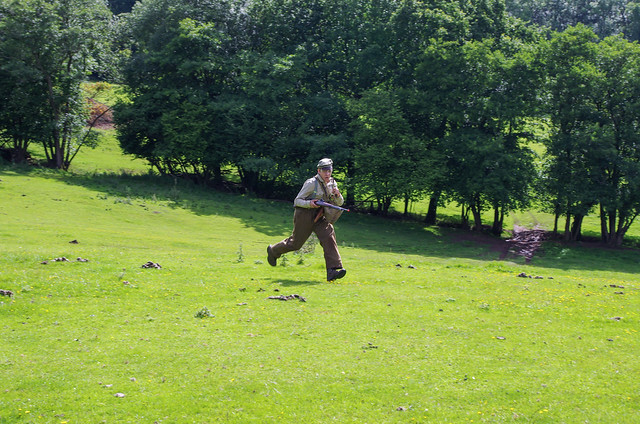 I reached the fort and found it still quite occupied. Two of the nearest Union boys shot at me and missed. 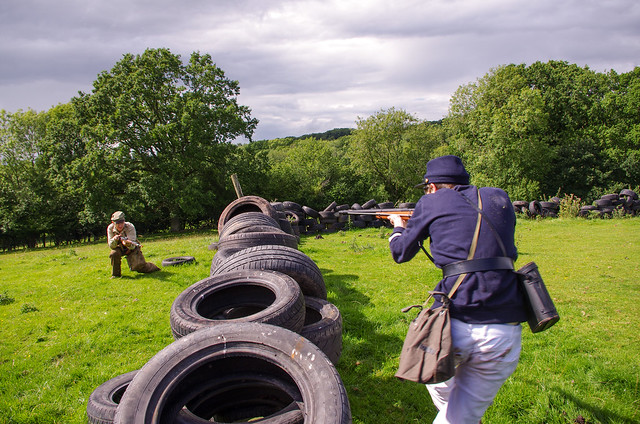 I shot at them and missed. In normal airsoft play at this point one player or the other would sprint straight at the wall and hose over it on full auto. 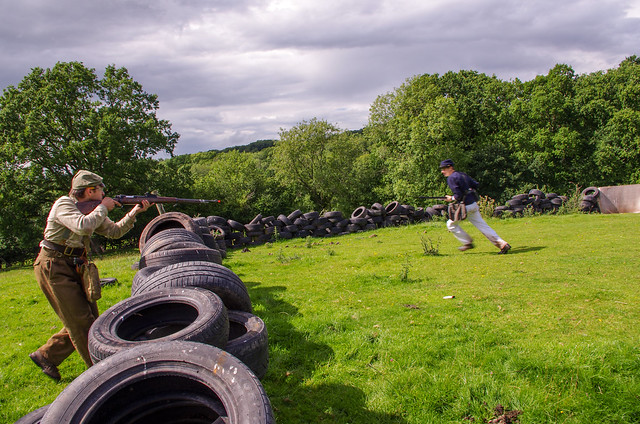 Instead, there was a brief consideration of whether or not to reload, before deciding that at this range, let’s just go in with the steel. I only just managed to land a stab on Aidan, at which point I ducked back down to reload. 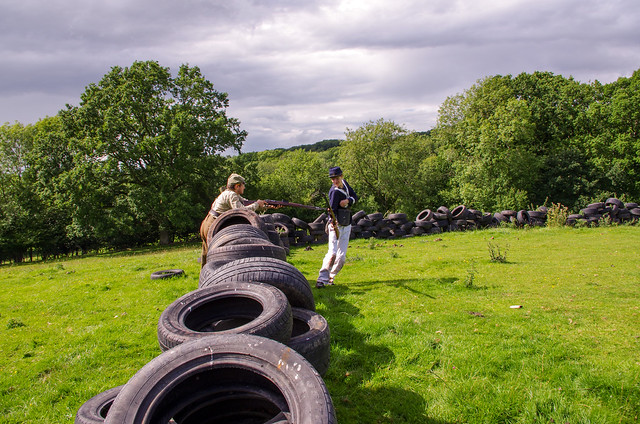 At this stage, my distraction had served its purpose and my team had pushed up and shot one of the others. We didn’t realise there was a third hidden away in the corner, who had to be dealt with as we climbed in. 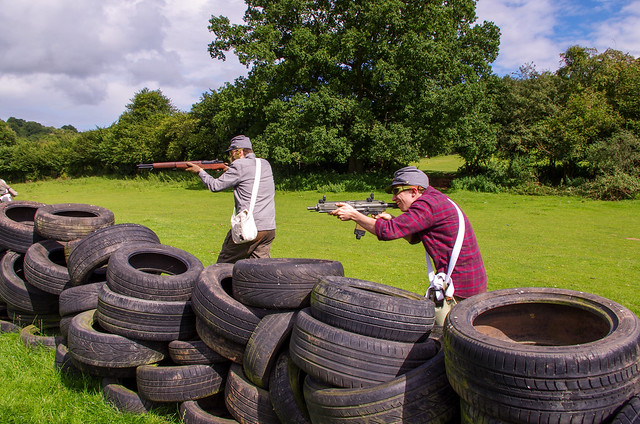 Once in the fort, it was a case of attempting to repeat the flanking action on the next group of buildings. This proved much harder as they had several angles to fire from and each flank covered. We had to take them in a certain order, so couldn’t just come in round the back. 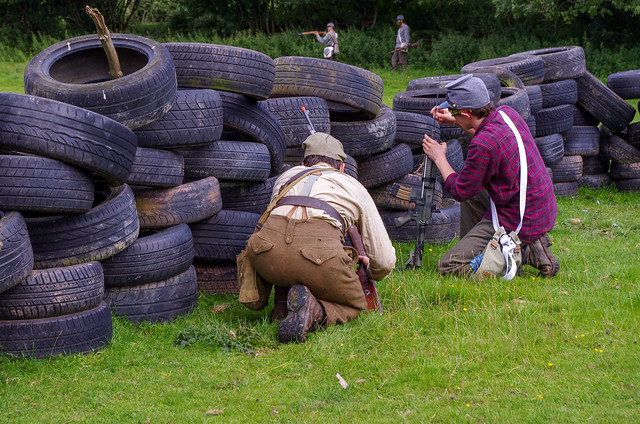 Now, with regards to marching in line and standing in a field; have I persuaded anyone yet that there’s much more to this type of play than just being a target? Because that isn’t exciting for anyone.

Now let’s talk about line fighting. ‘Cause this is exciting, even if it doesn’t sound like it would be. 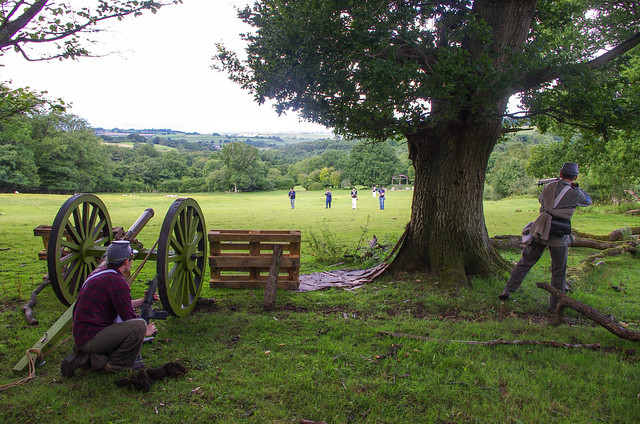 For normal airsoft, advancing across open ground and firing in lines would be useless and painful to boot. With two opposing lines of even numbers, the chances of one side wiping the other out in shooting at range is unlikely. You have to get close to increase the chance of hits, even then there’s no guarantee and when BBs are coming in at near 400fps at close range the pressure is on to reload. Reloading under that sort of pressure is surprisingly hard! 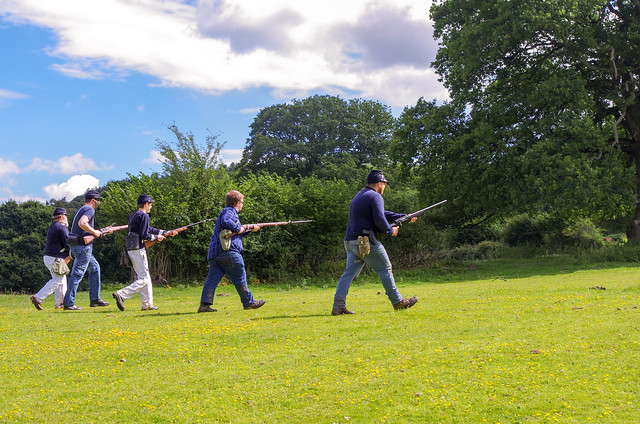 If the attacking force do so with determination and vigour, using a little work on the flanks, they can get to grips ‘properly’. Melee is not just a nice addition to this type of fighting, it is a necessity. 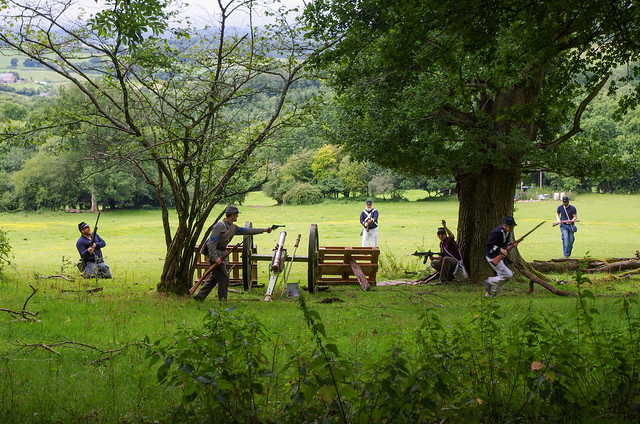 The artillery is a nice touch too, advancing into it is unnerving. The only time the Confederates had to take it on was over relatively covered ground, but with the shells coming in around you and not being able to tell where they were coming from or landing was distracting. TAGs make a very, very loud bang by airsoft paper pyro standards. I’m told that advancing toward it over open ground is also unpleasant. 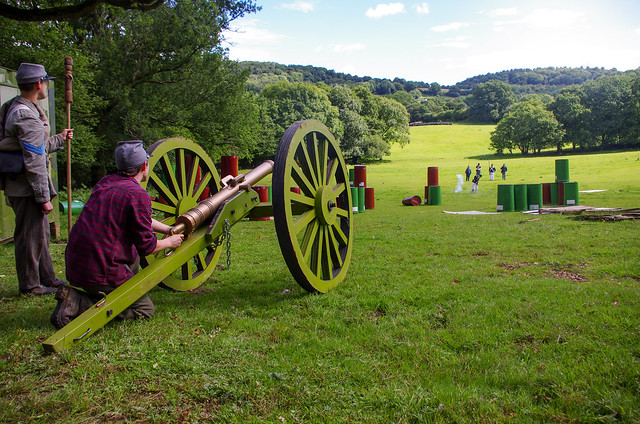 There’s a great deal of satisfaction in this type of game. Because of the higher-powered rifles there is more of an adrenaline rush when playing close up, the pressure to reload or charge is intense. The lack of automatic fire means you have to pick your shots, pick your targets. It means you can move from cover to cover without being pasted. 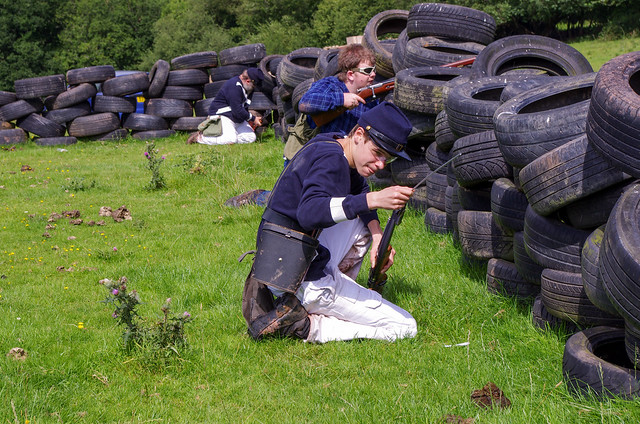 If you think this type of game could be your bag, I would wholeheartedly encourage you to give it a go.

You can join the British 19th Century Airsoft Association Facebook group for reports and updates on the battles and events being held and to meet the community (top blokes all). You can get first word on events on the organisation page here.