This project is one I’ve been wanting to do since forever and the outcome is very satisfying.

This VSR based carbine should be a very nice balance of practical and handsome. The receiver has been left quite plain, at some point I would like to do another with the receiver all milled out like the original. This will have to wait for now as it will require extensive modifications to make it secure. 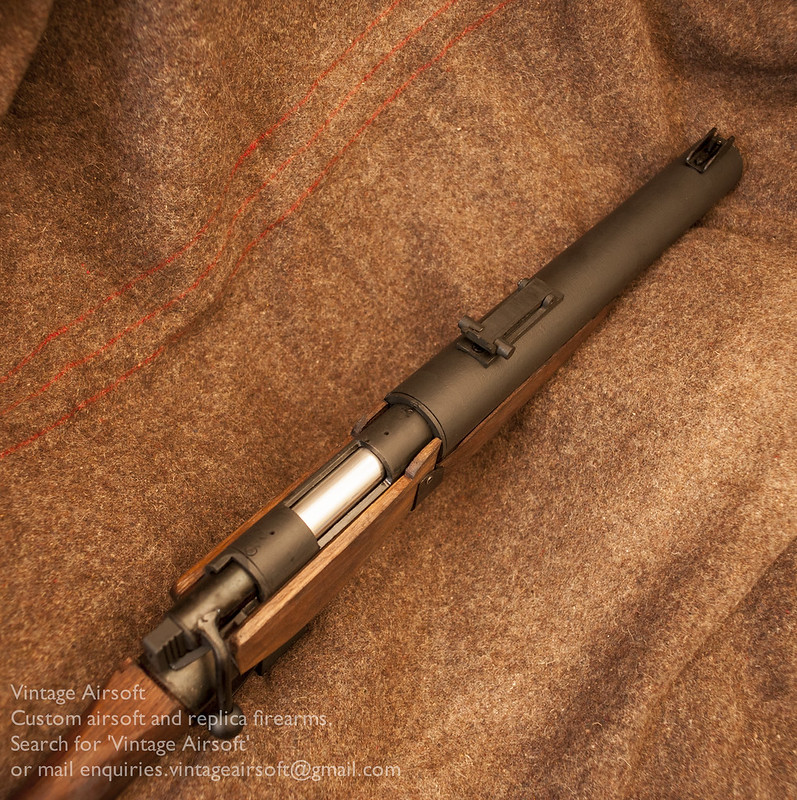 As you can see, the bolt handle has been dropped down around the right location. The bolt back cap on this one has been 3D printed, but I am likely going to replace this with a milled one for strength and durability. 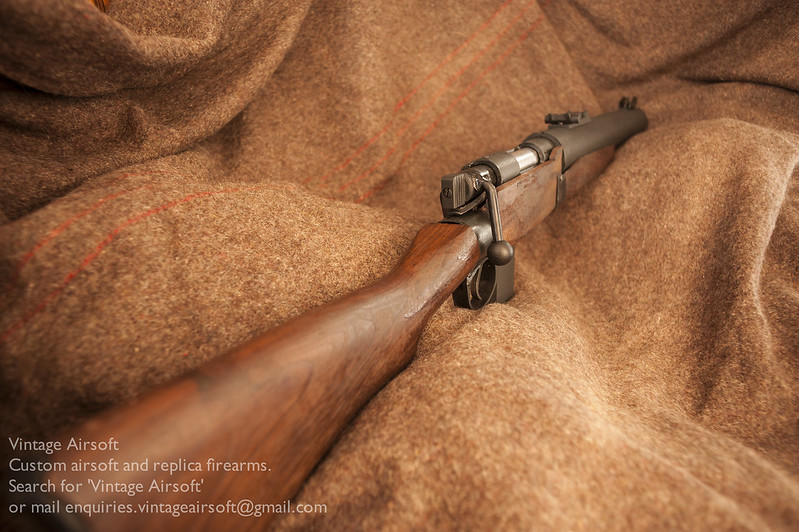 The foresight, which is adjustable for windage to a limited extent. 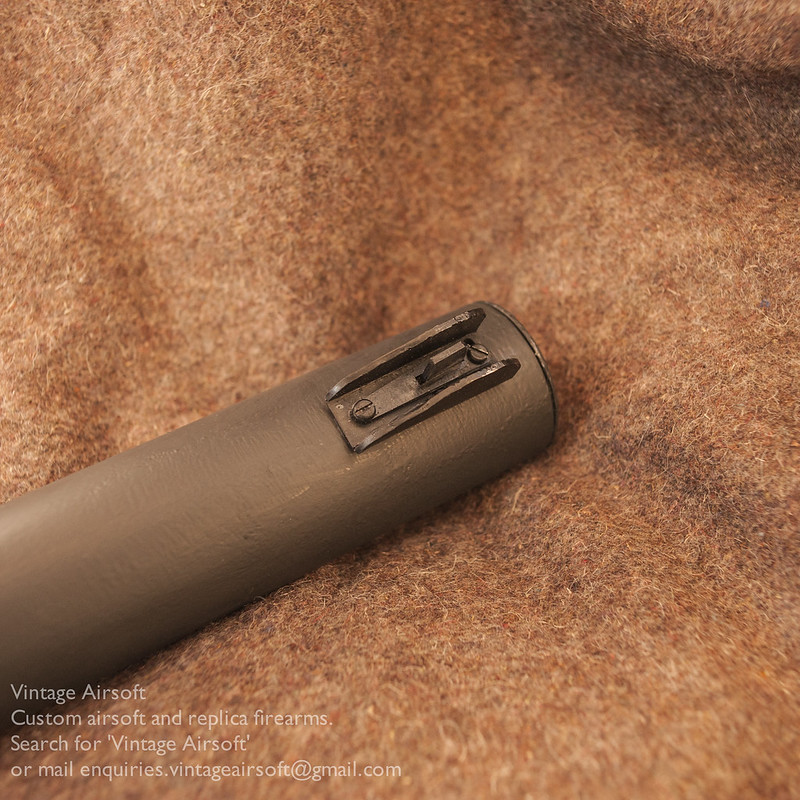 The 3D printed front cap. You can also see the barrel poking out. Although I could have made it shorter than this, it would have ended up being incredibly short and every millimetre helps with a barrel of this length. 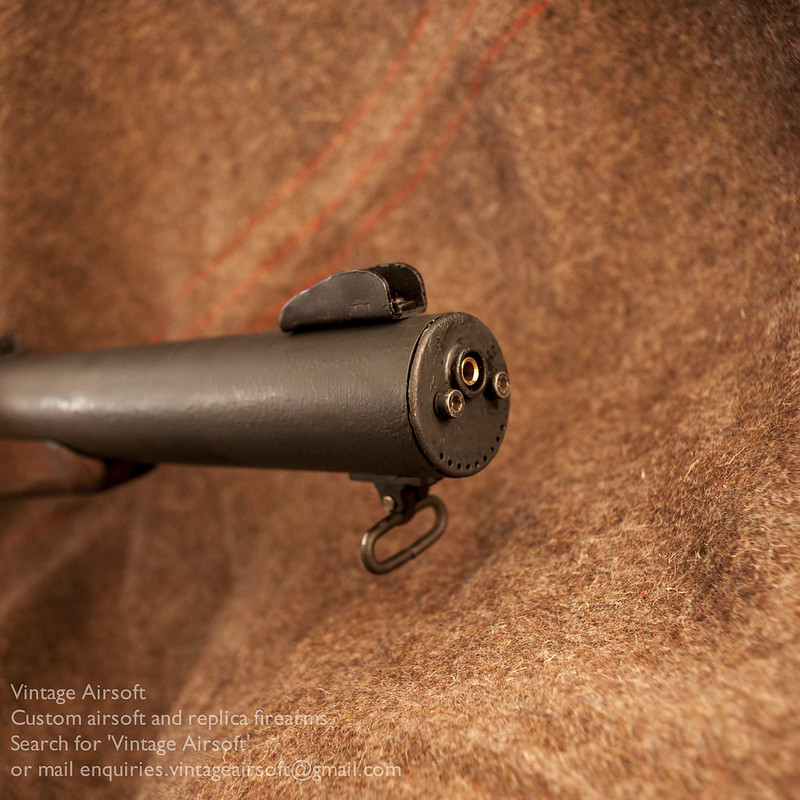 The rear sight, adjustable for elevation. The hop adjustment is under this, a TDC screw modification. 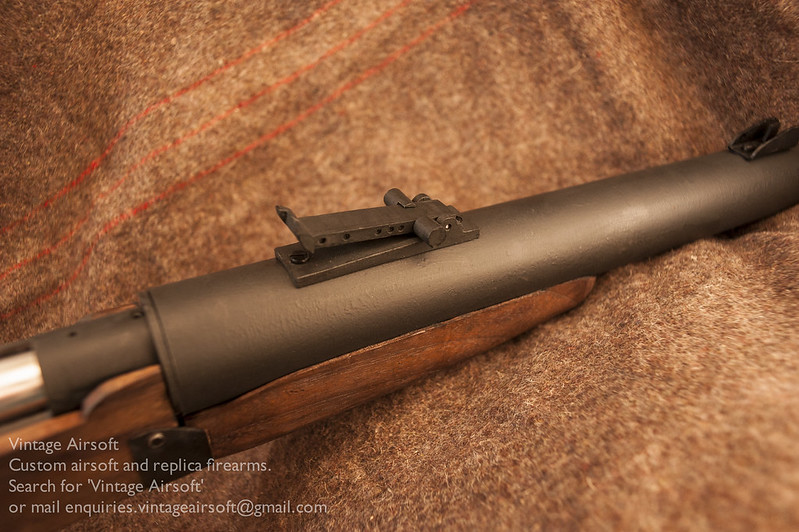 The faux magazine is 3D printed and quite solid. If this model proves popular I may make it in black hard rubber instead. 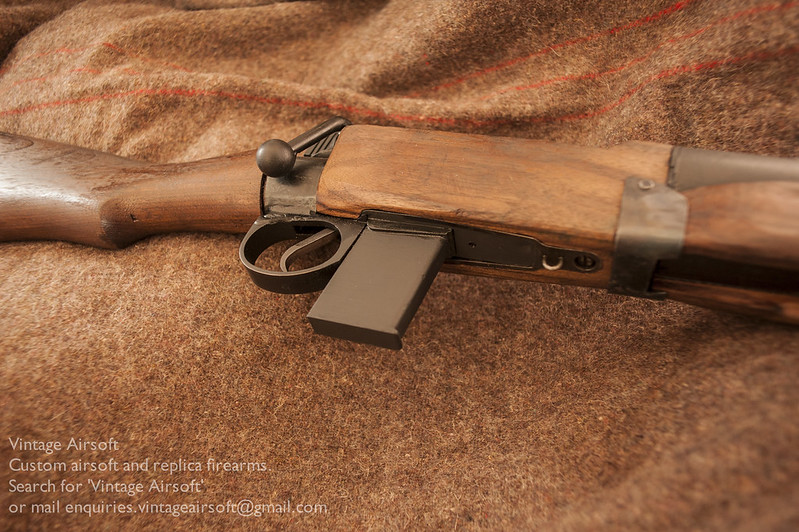 The buttplate is a rubber cast, as originals are getting prohibitively rare and expensive. 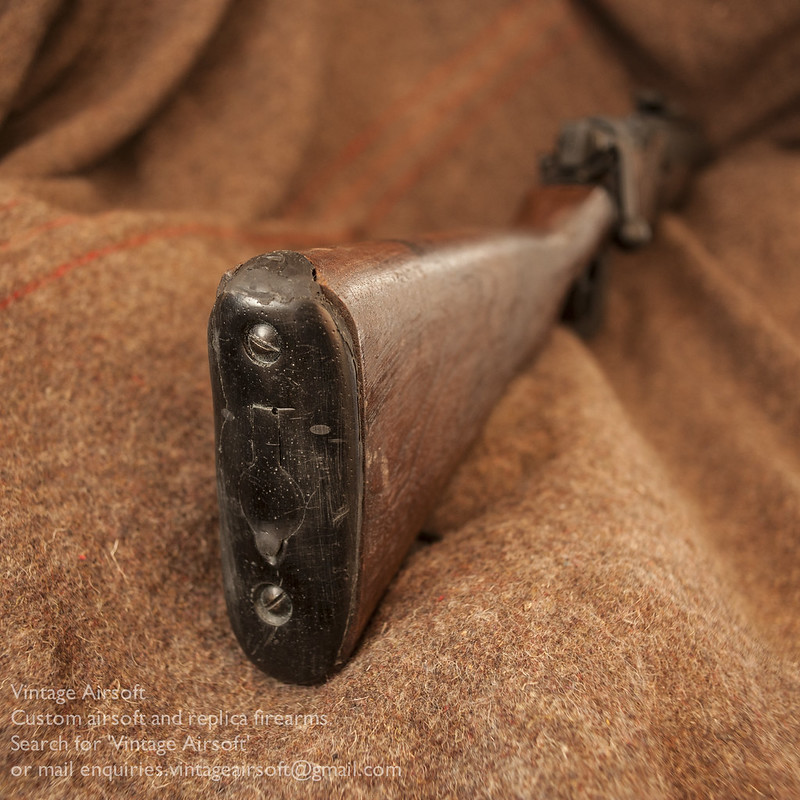 Finally a quick bottom view, the VSR magazine well in the foregrip and cut out re-enforcing band. The grain on these bits of wood are particularly lovely and you can see them in this picture.

The DeLisle is VSR based, so this acts as the joining unit between the different parts. Due to the sheer size of the suppressor however this will pretty much be joined as part of the chassis.

At the fore-end, the front cap is 3D printed, as is an internal spacer. 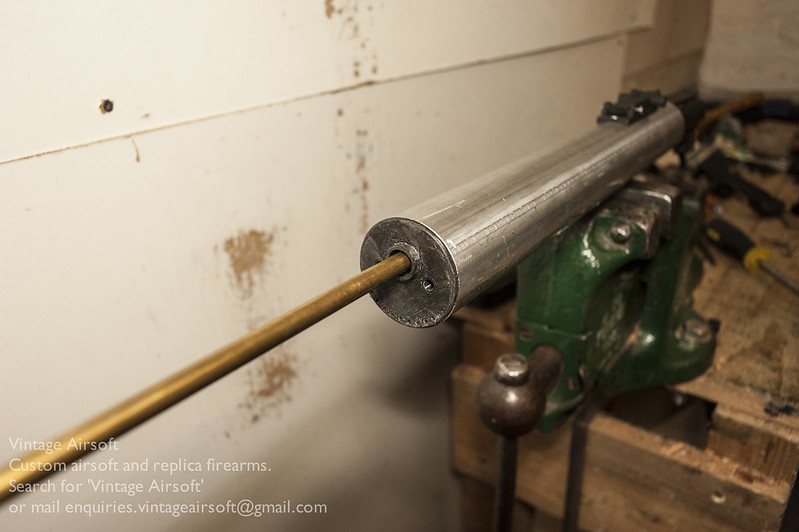 At the back of the suppressor is the rear sight, a simple V-notch on an elevation leaf. 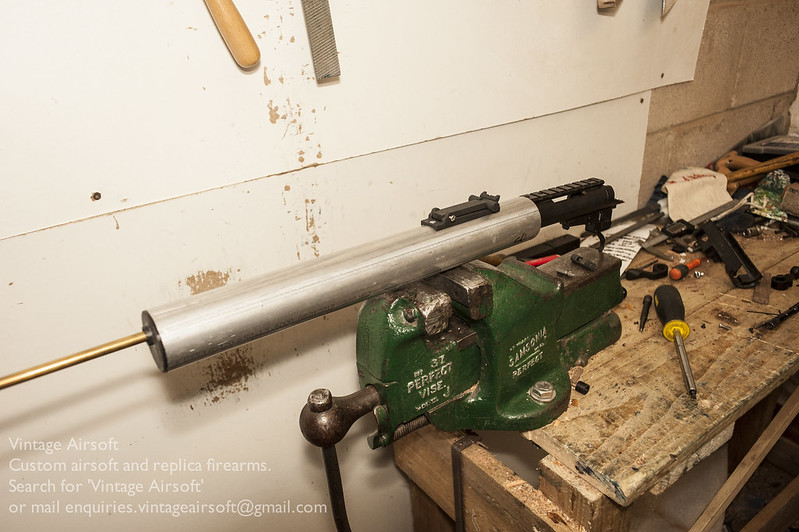 The woodwork on this is in three parts, the buttstock, receiver housing and forestock. Once I had carved out the internal shapes for the receiver and magazine well, I could shape the outside. 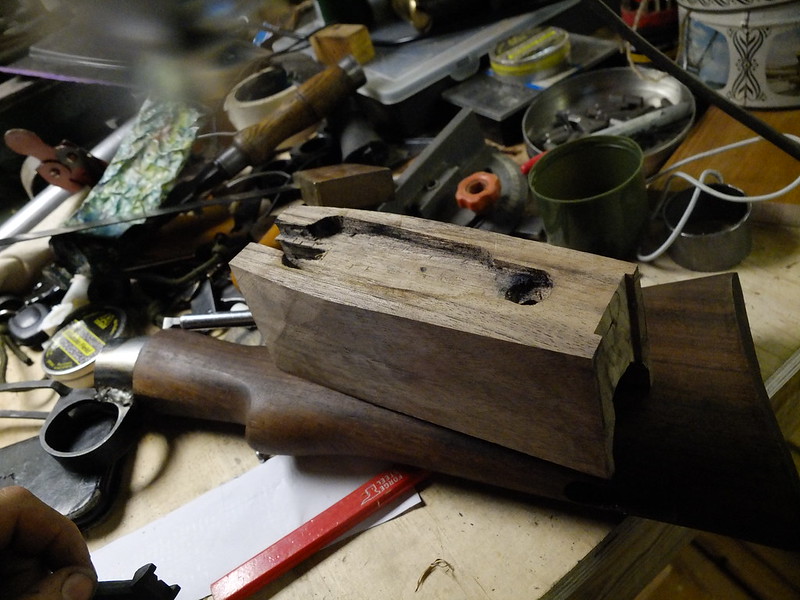 Once all the parts were roughly shaped and strapped down to the VSRI added the re-enforcing band. I’m not sure this was strictly necessary, but it was on the original so on it goes! 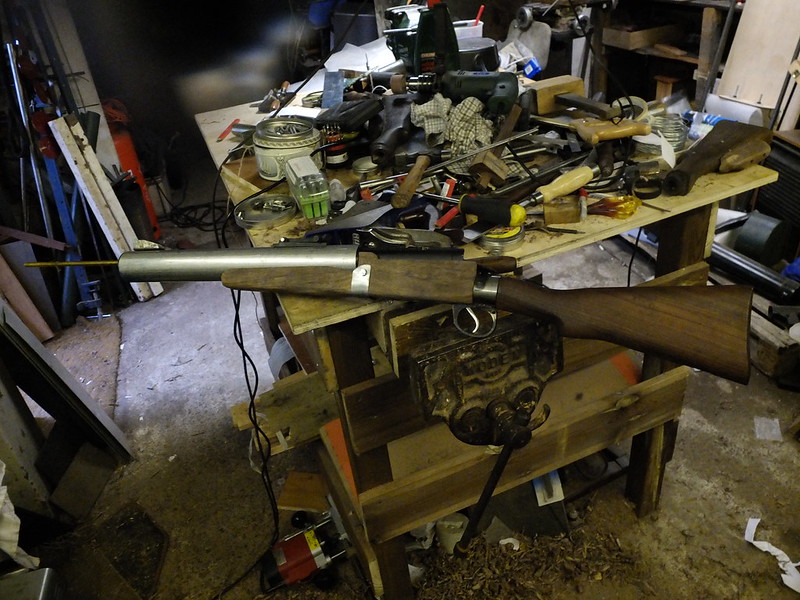 The band had to be cut back for the magazine well, but it will make quite a nice tactile reverence point if the gun is used in the dark. 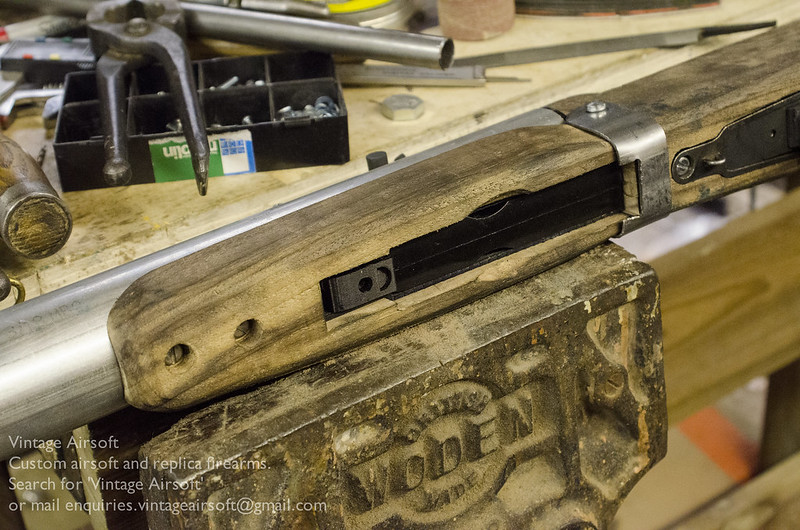 Fitting the faux magazine well in permanently, this 3D printed part is fitted with a machine screw through the stock so it’s pretty solidly mounted. 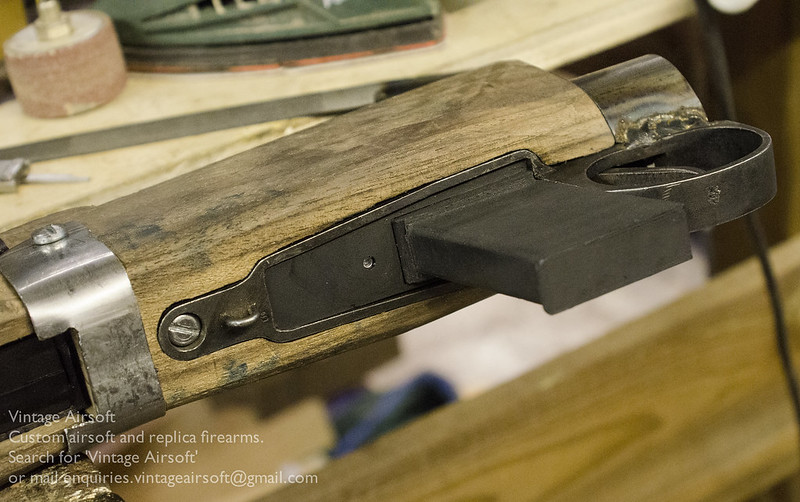 At the front, I turned the inner barrel down to the correct length. 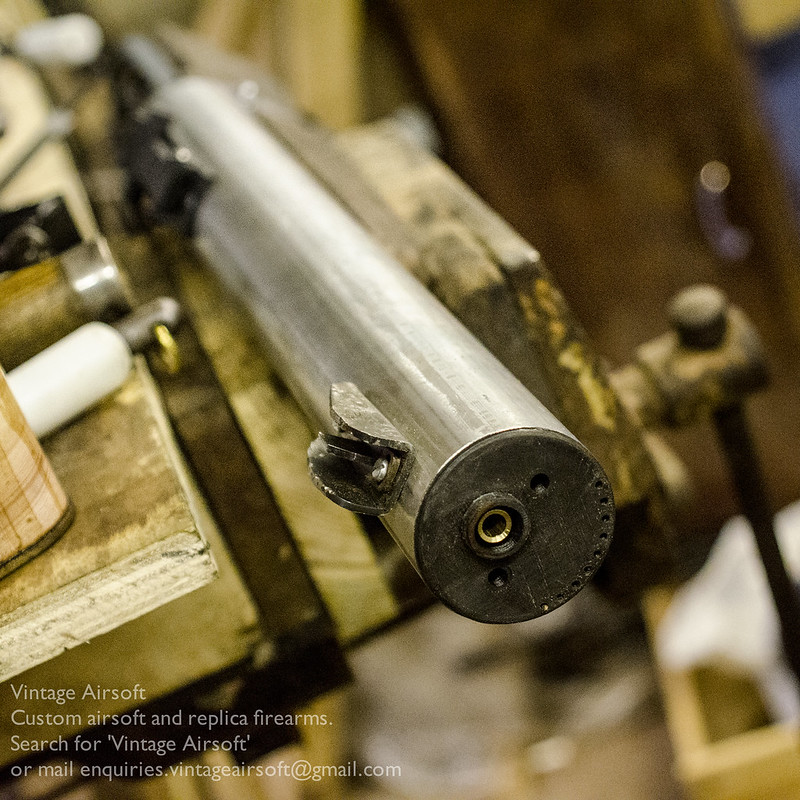 At this stage, it’s mostly finishing and painting work to do, which isn’t very interesting to see so the next time you see this, it will be the finished item!

The DeLisle carbine was born of a need, usually by special forces units, to dispatch enemy soldiers quietly. This came from the rise of raiding tactics used by British forces against Fortress Europe, the only way that precision strikes could be made against German targets.

Although large-scale raids did occur, many were smaller scale and undertaken by the newly formed Commandos and Parachute units. Taking out one or two sentries discretely before moving up to the target would allow soldiers to get much closer to their objective before the main, noisy assault.

The carbine itself was the lovechild of an SMLE, (receiver and furniture) a 1911 (magazine) and a Maxim style suppressor. The reason for its near legendary status as one of the quietest arms ever made is that every aspect of it was either chosen for its quietness or modified to achieve it: 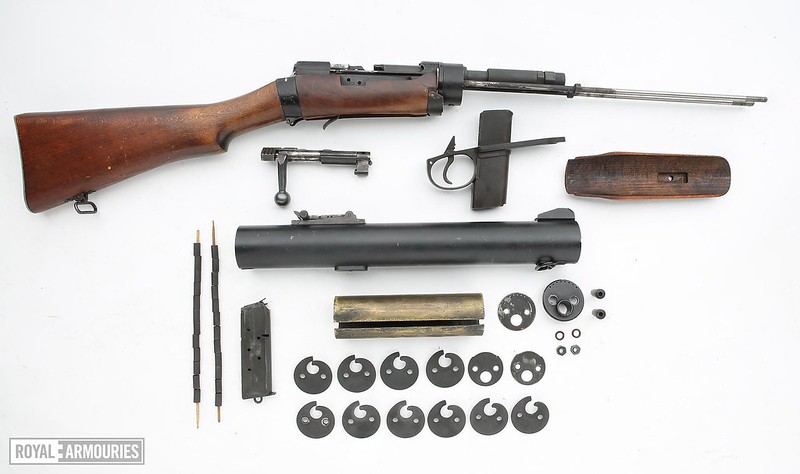 It is known that the DeLisle was issued to and tested by Combined Operations (who ran the Commando type raids) in the field, but finding solid accounts of their use during WWII in Europe is pretty tricky. The only account I have found so far is one by a Jedburgh Commander who says that one was used to successfully dispatch two German officers (1944).

Other more substantial accounts outlining more specific details of their use have been recorded in the Far East against the Japanese and during the Malayan Emergency. They point to it being used very much as a psychological weapon, taking out individuals during ambushes at night or on roads during the day, killing one or two men in a lorry. Being almost silent, the Japanese involved struggled to know they had been fired upon and even more-so where from. 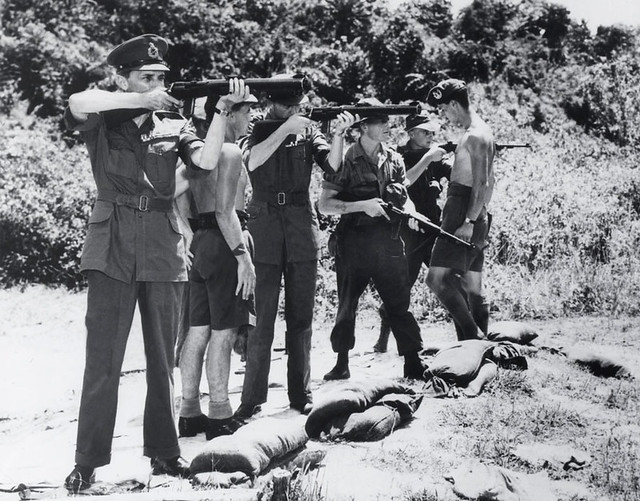 Similarly it was deployed against bandits and terrorists in Malaya, allegedly by plantation operators. One man caught out alone in the fields had a significant advantage when he could fire on a group of hostile enemy without giving his position away. Just a couple of men so armed would have a significant force multiplying effect.

Just before I wrap up, the folding stock ‘Para’ version does deserve a mention. Originally, these were supposed to make up 50 items of the order, but it looks as though they were left until last. As a result, when the order was cancelled there was only this sample produced as far as we know.

And in case you are not familiar with the Vintage Airsoft format by now… I will be building a De Lisle carbine! This build will be VSR based, using my new MkII magwell and almost certainly making use of my lovely ‘new’ mill (more to follow on that when it arrives!).

You will be able to follow the build progress here as it is published.