At some point in the Sten’s history, someone must have thought: “This thing is too long, and too easy to handle. Let’s make it shorter and really hard to handle!”

So they stuck a pistol grip where the buttstock should go and created the iconic shape of the gun (apparently) used by Commandos and Resistance fighters all over Europe. 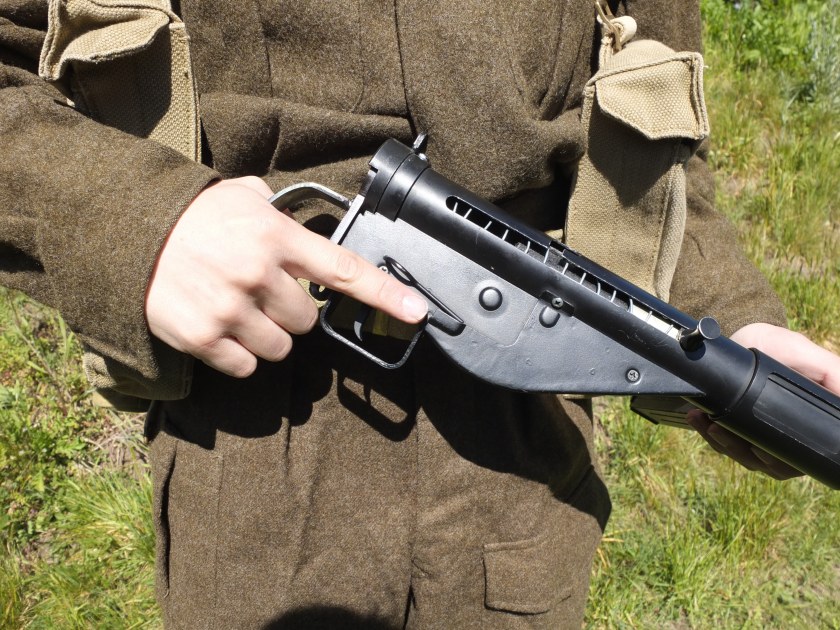 So of course I had to make a replica for the Airsoft ASG Sten. This piece is custom-made for Airsoft Stens. It does require the use of LiPo batteries in the receiver as there is no space to hide it in the grip itself. 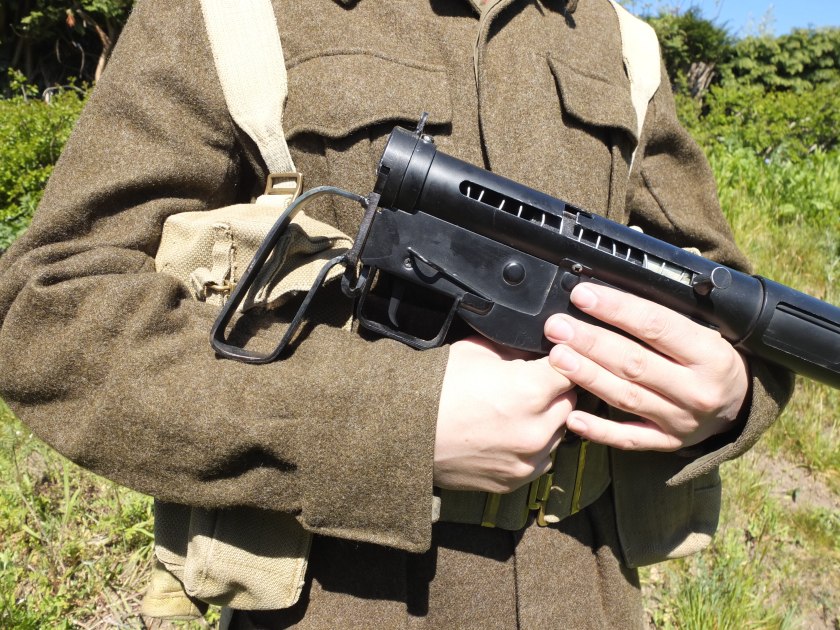 The unit is steel and is forged and welded. The piece shown has been oil finished but it can be left plain or painted.

Want one? Drop us a line at enquiries.vintageairsoft@gmail.com. Also, have a look at our new PRODUCTS page to see more finished products.

The MP28 has its roots deep in the deadlock of the Great War. Both sides had tried great waves of infantry, poison gas, vast artillery barrages but none of these seemed to do anything to break the stalemate of the Western Front.

As history has shown us, the Tank ultimately won the day but for a while it looked as though specialised raiding parties that were highly trained, aggressive and well equipped may be the secret. The MP18 was one of the first attempts to miniaturise the killing power of the machine gun and make it portable. At just over 9lbs it was still no side-arm but it definitely gave soldiers who carried it an edge in close-quarters fighting.

The MP18 was the firstborn in a long line of submachine guns that carried on serving into the 1970s, so many people copied the design (with some minute changes) including the Chinese, Austrians, Finns and Estonians. In spite of a ban on the study and development of automatic weapons put in place by the Treaty of Versailles, from this evolved the MP28. This used a straight 20 round magazine that sat perpendicular to the barrel (later there was also a 32 round magazine made available).

This design was also shamelessly copied, with the Danes, British and Chinese all getting in on the act. The British Lanchester SMG is a copy so direct that the bolt and magazine from an MP28 can be used in it, though it wins some man-points for being able to use the 17-inch SMLE bayonet!

Lanchester with SMLE bayonet and 50 round magazine. Courtesy of deactivated-guns.co.uk.

The MP28 served with German forces until at least 1945. Its derivatives served with countless other nations for years afterwards, with the Royal Navy using the Lanchester until the 1980s. The MP28 saw use by riot police in the 1920s, the Second World War, its derivatives in numerous French colonial wars, by the Japanese in the Pacific, the Koreans against the Japanese at so on and so on….

Everyone killed everyone with this gun.

As ever, if this has inspired you for a project of your own, do drop me a line on the usual email address to discuss! enquiries.vintageairsoft@gmail.com.

Further progress was made on the Welrod yesterday! This project is coming together quite quickly as it is already starting to look like the original gun. 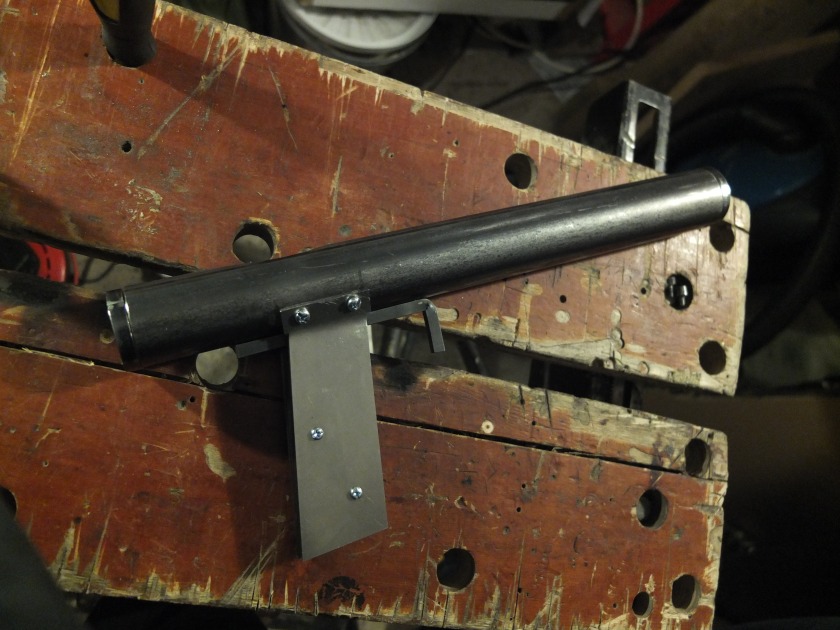 Below you can see the internal cylinder pulled out as if the gun was being cocked. This also aligns the feed system for loading. The gun cocks on opening when the piston locks into the sear. 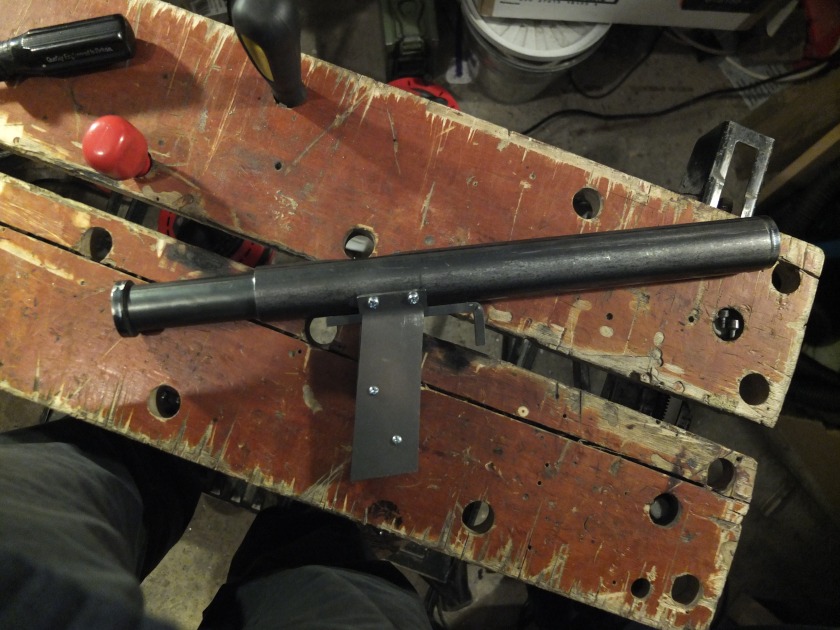 Next job is to make the piston (it will be a custom-made piston in aluminium, turned on the lathe) and the second sear. I’ll also have to buy in the barrel and the spring!

If this post has inspired you for a project or you fancy one of your own do drop me a line on enquiries.vintageairsoft@gmail.com.

Last week I collected a whole host of parts for various projects from the laser cutters, among which were the bits for the Welrod MkII.

It’s always an unnerving time when the parts come back as there’s almost always something missing or slightly wrong that you have forgotten to correct during the development of the design. In this case there was a little to-ing and fro-ing on the size of the cylinder and the guide washers that suspended the cylinder in the original deign became somewhat redundant by the time the parts went for cutting and the stop-post (that prevents the spring sliding back with the rest of the cylinder) was built into one of these. An easy enough fix though and one that will both simplify manufacture in the longer run and make the Welrod much easier to strip. 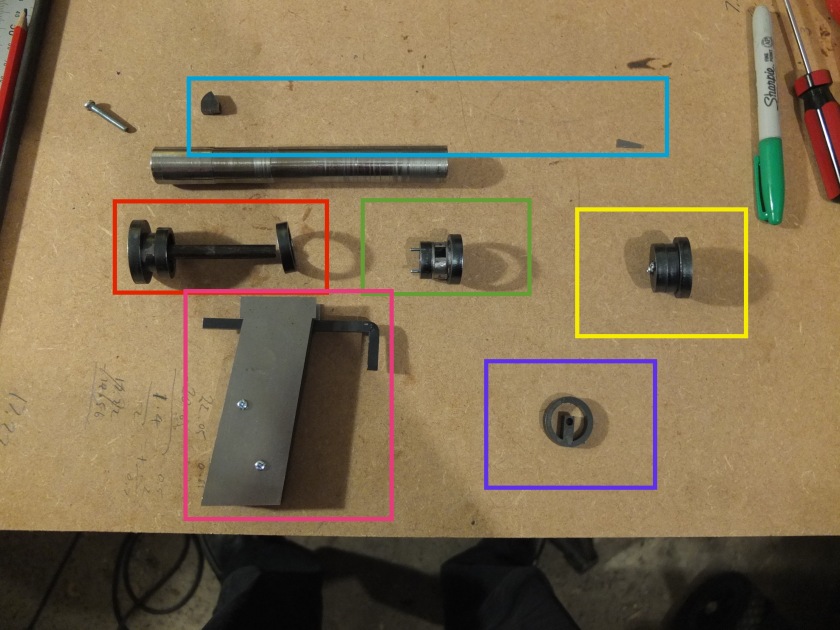 In this picture I have left out the spring (as I haven’t bought it yet) and the second sear (as I haven’t made it yet) but as you can see, it’s pretty simple, much like the original. There may have to be a few tweaks to the design here and there as the build progresses but so far, so good!

As per usual, if this post has given you an idea for a project so drop me a line on enquiries.vintageairsoft@gmail.com!

A little update on how the M72A7 custom built rocket launcher is going.