Some pictures of the finished Gas SMLE!  In future I may add a charging bridge and a cut out for stripper clips in the receiver but for now I’ll keep it as-is. 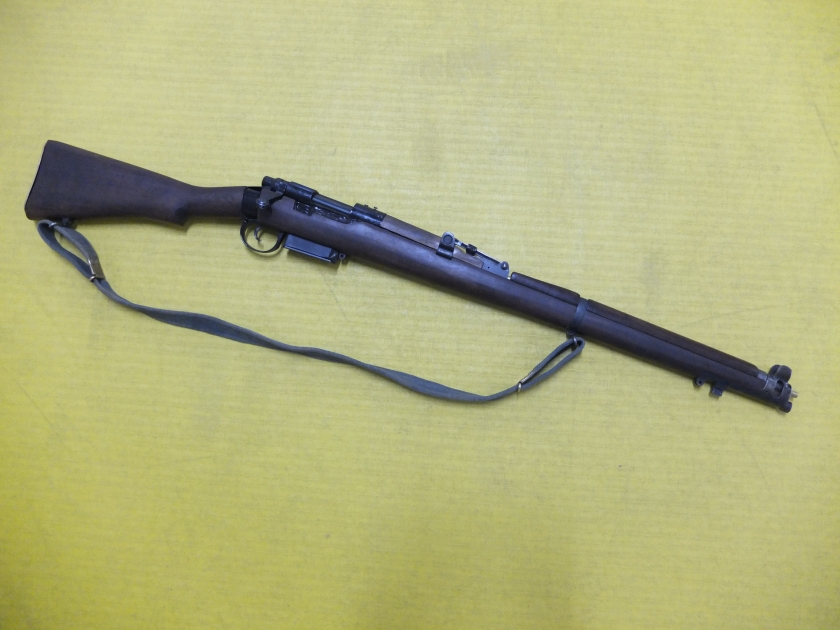 i have left the inner barrel protruding for now as it makes it easier to chrono! I may change this in future. 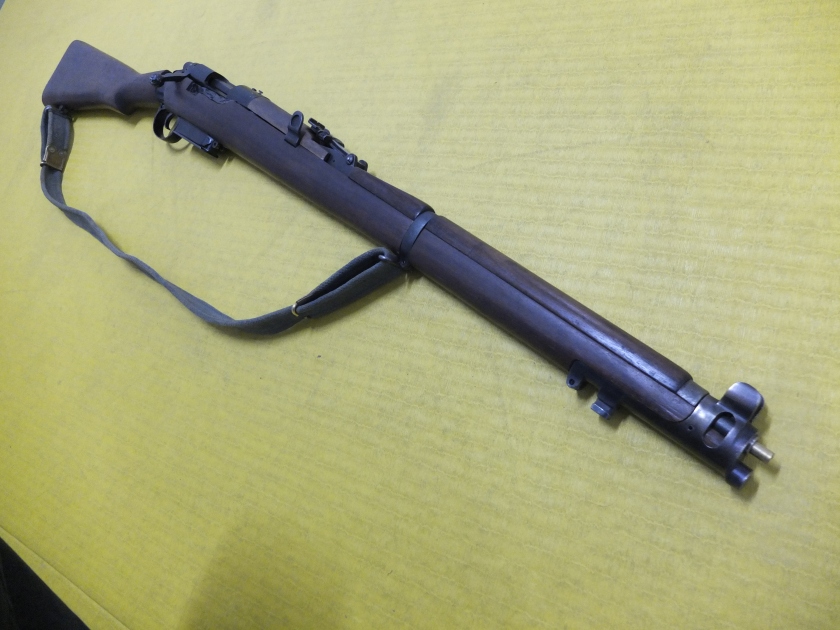 Real steel rear sight, with the rear hand guard made to fit the receiver. 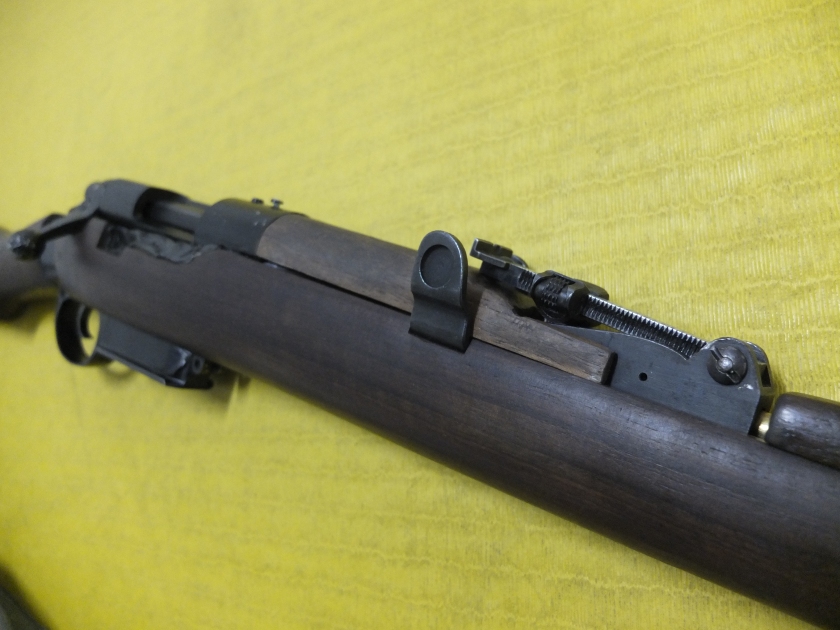 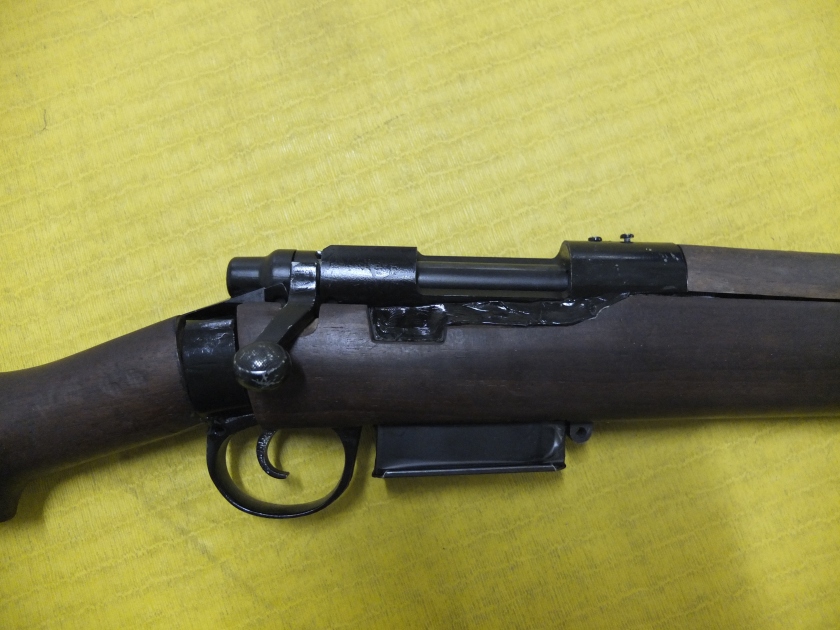 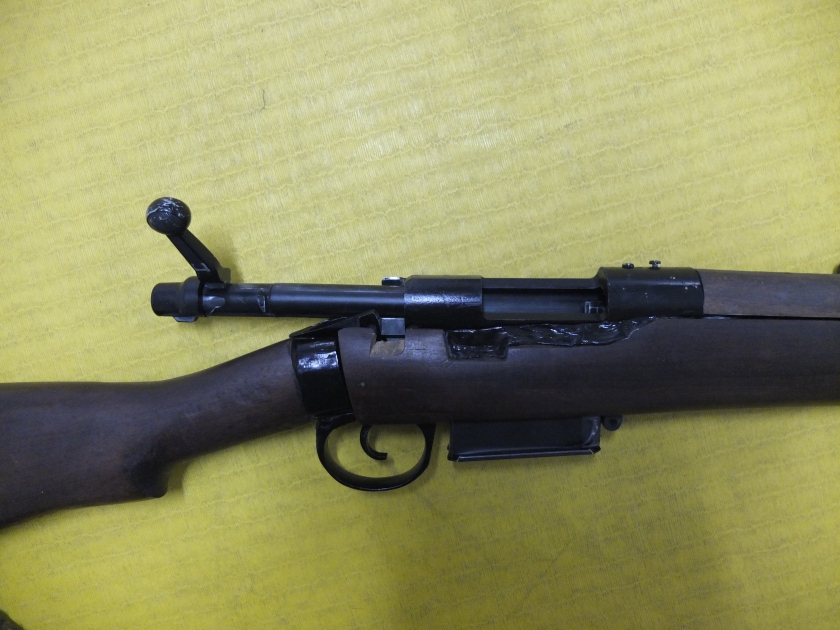 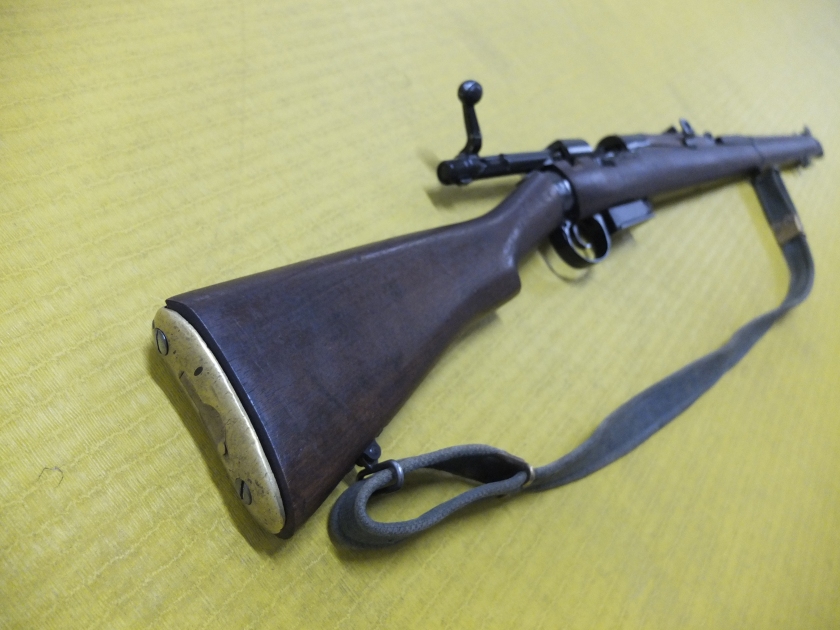 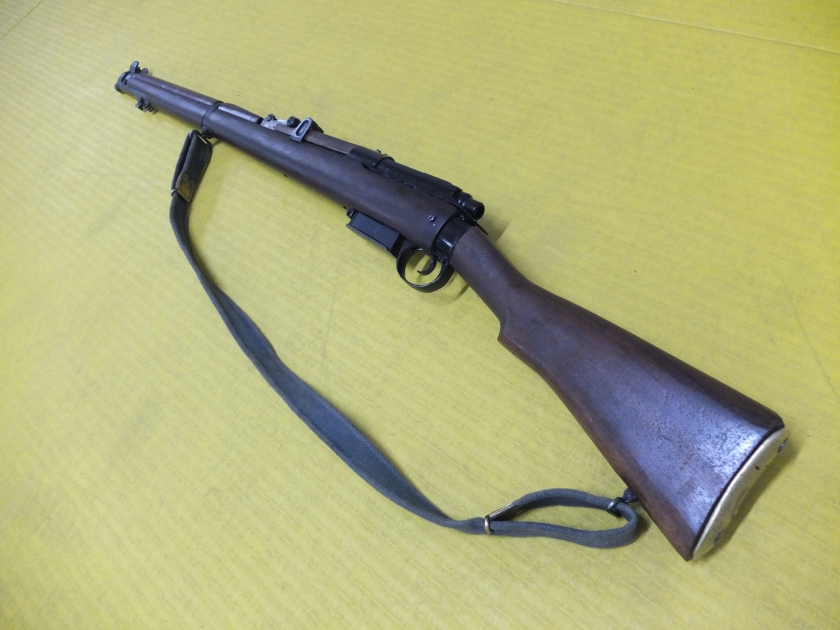 If you are like this project or have an idea of your own, drop us a line on enquiries.vintageairsoft@gmail.com to discuss. ‘Like’ our Facebook page or follow the blog to get regular updates on projects and interesting videos and articles.

The Gas SMLE has been a very long project in the making. It is actually one of my first attempts to build a custom airsoft gun but kept getting put back by problem after problem.

This was originally going to be spring powered, but I was offered a gas G&G G96 and couldn’t say no. This is a clone of the KJW M700 and is essentially made up of all of G&G’s upgrade parts for the same.

My first priority was to make the rear band, which in the original is a part of the receiver. My initial thought to replicate this complex shape was to cast it in aluminium. I used a deactivated Lee-Enfield to form the mould. 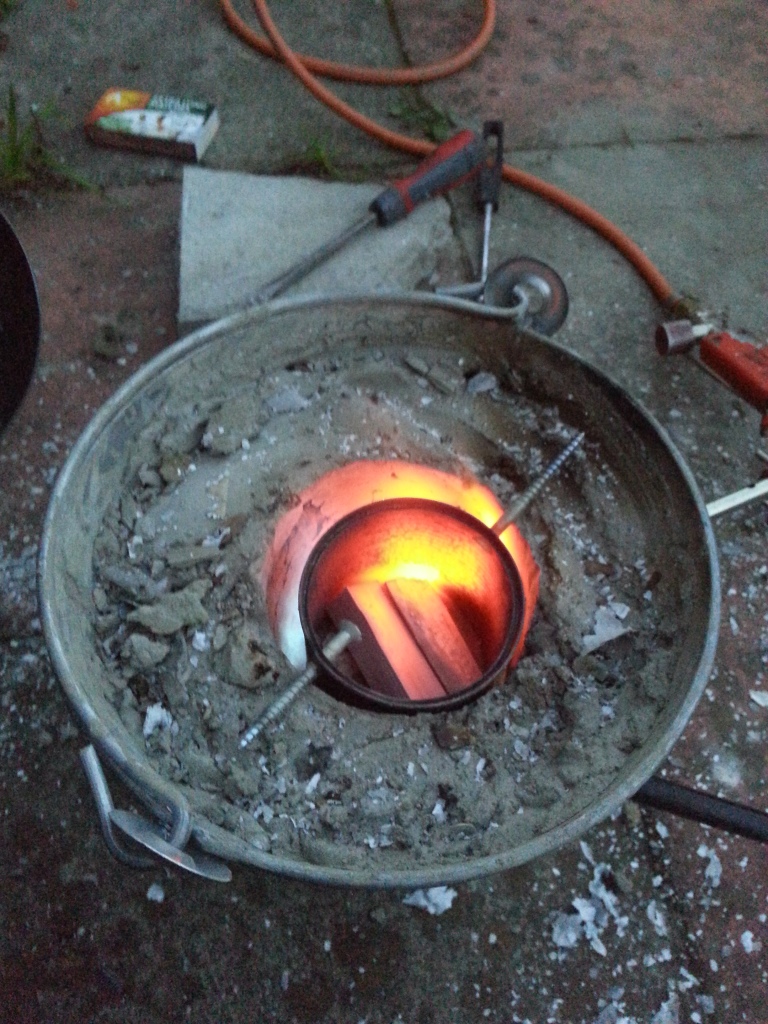 I built my furnace from a bucket, gas torch, a load of cement and a few other bits! 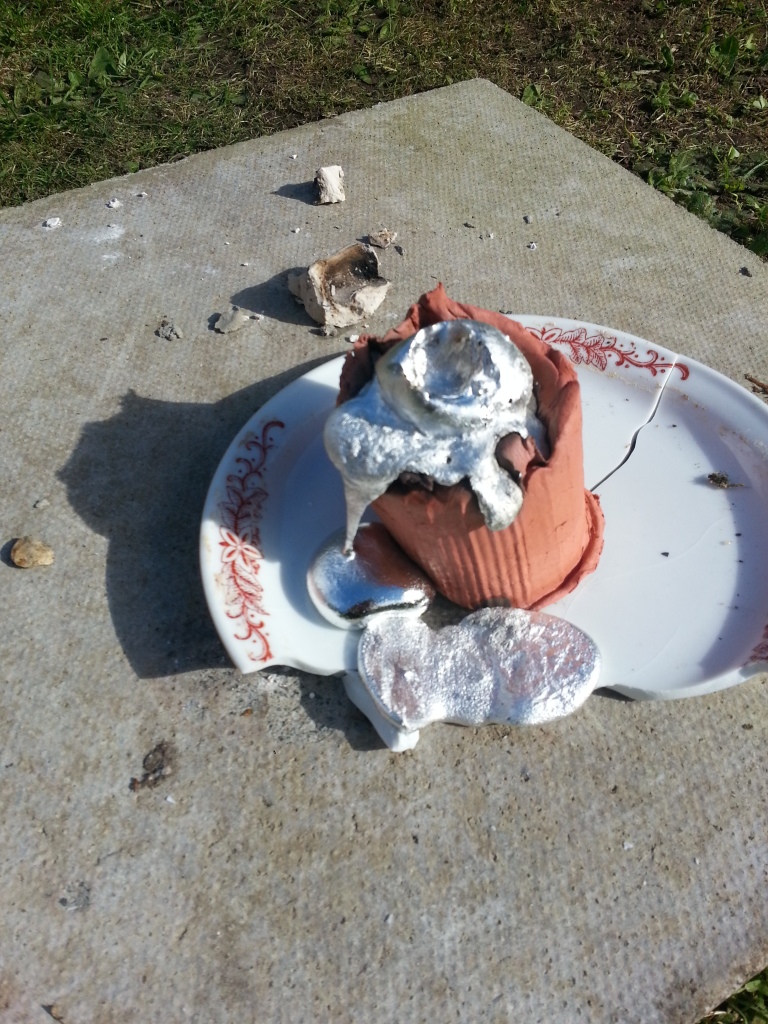 This allowed me to make quite a few castings. Each one improved on the last until I reached my pinnacle! 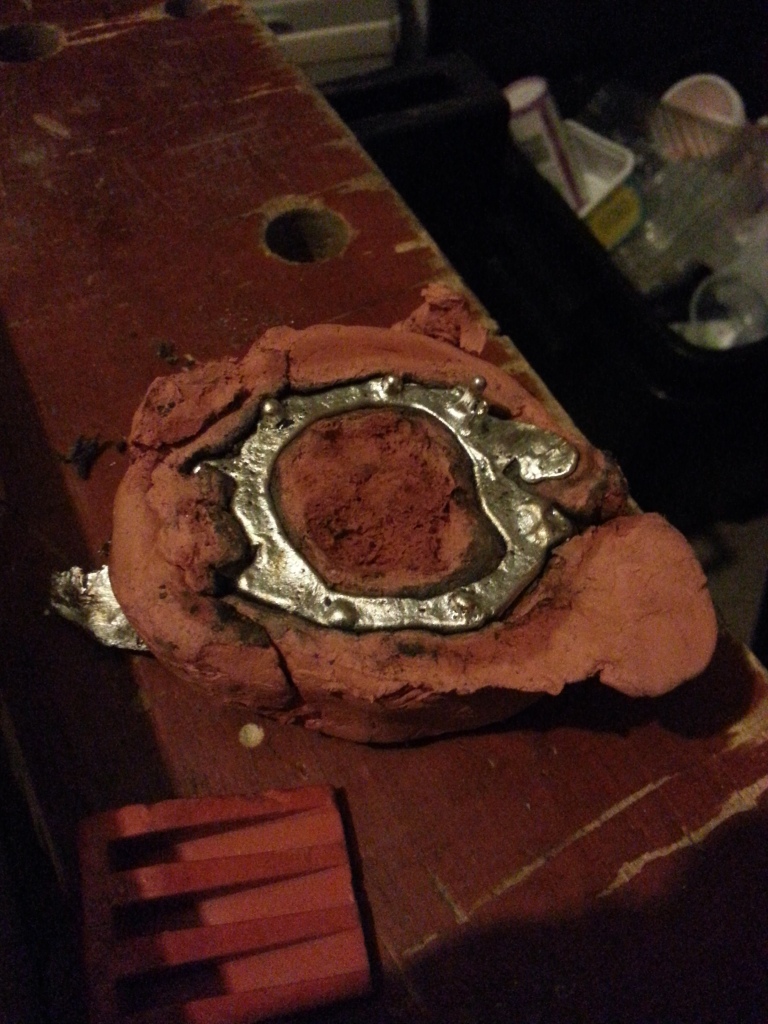 The rough castings could be filed into shape, initially just to fit the (original SMLE) woodwork but then to it the receiver of the donor rifle. 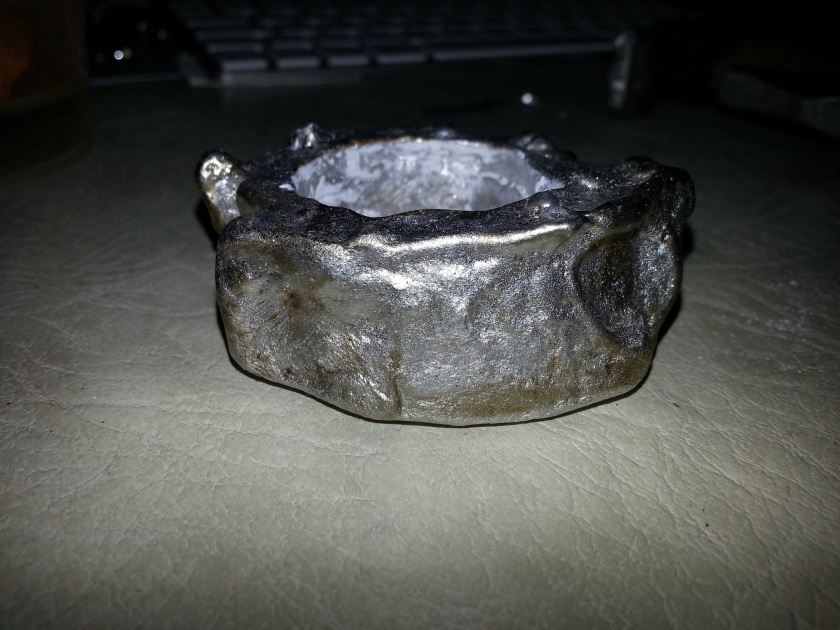 However as aluminium and steel have such different melting points fitting the band to the trigger guard proved troublesome, especially given the level of accuracy I could achieve with the casting process. 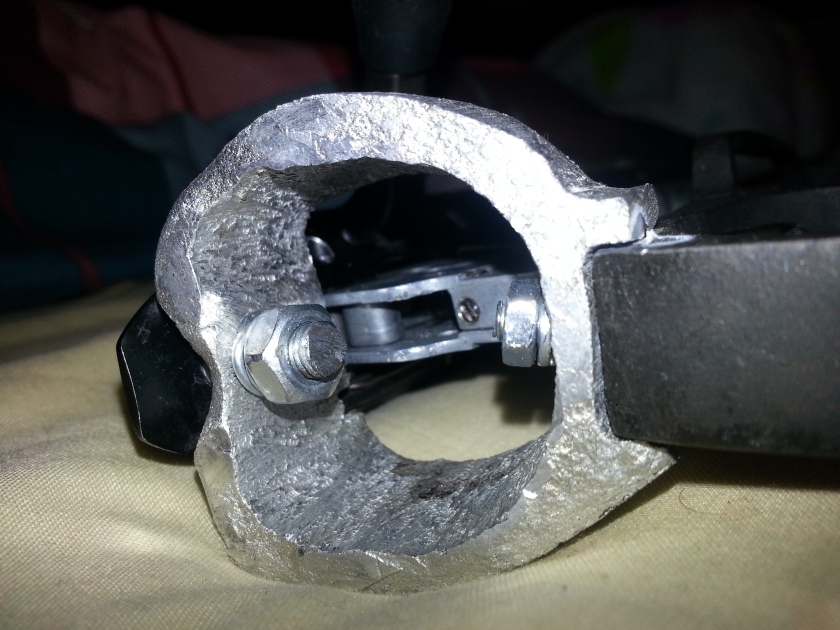 Eventually I gave up on this and went with a more conventional way of building an airsoft Enfield. I wrapped a piece of steel around the attachment end of a buttstock and welded it in place. Then filed it down so the M700 receiver could fit. 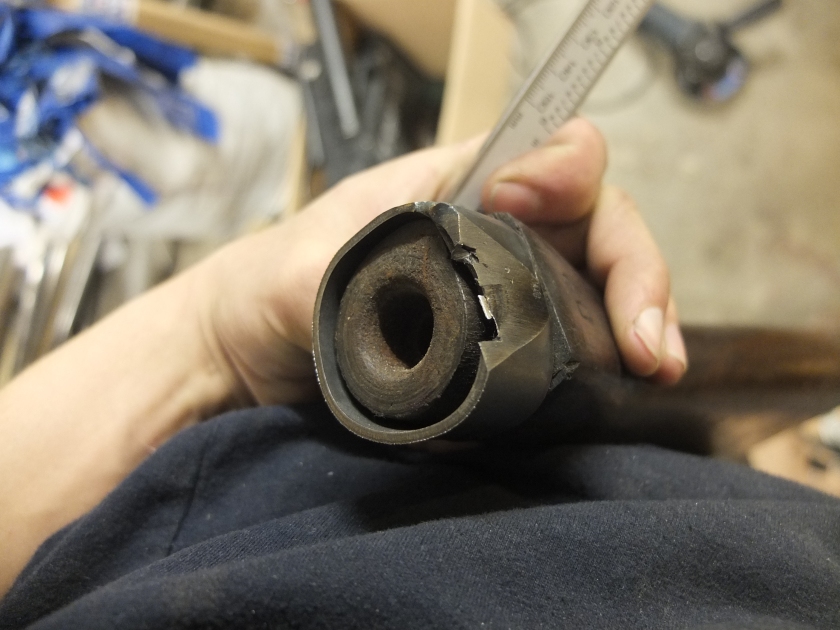 I then put an endcap over the front, to which I could attach a nut when the time came. 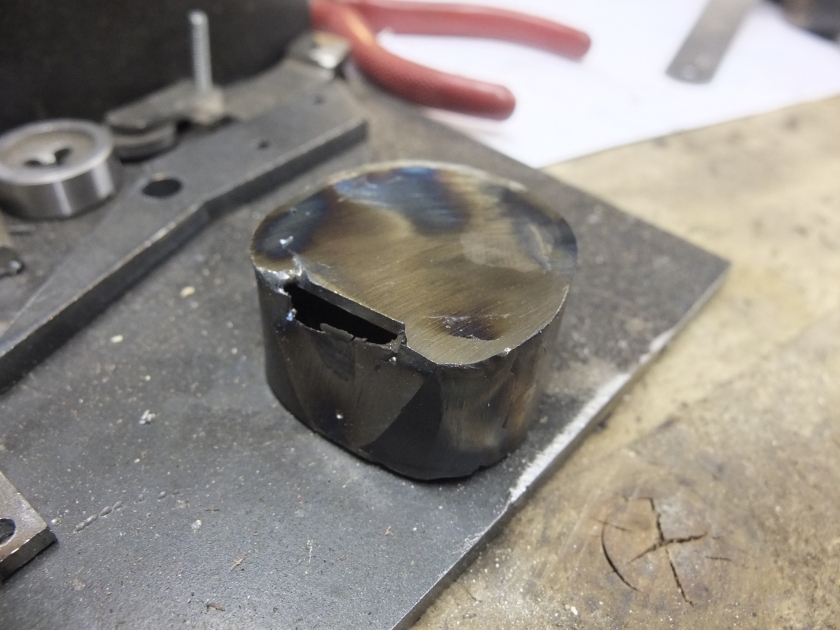 The trigger guard was cleaned off at the back and bevelled in order to achieve a really deep, solid weld. 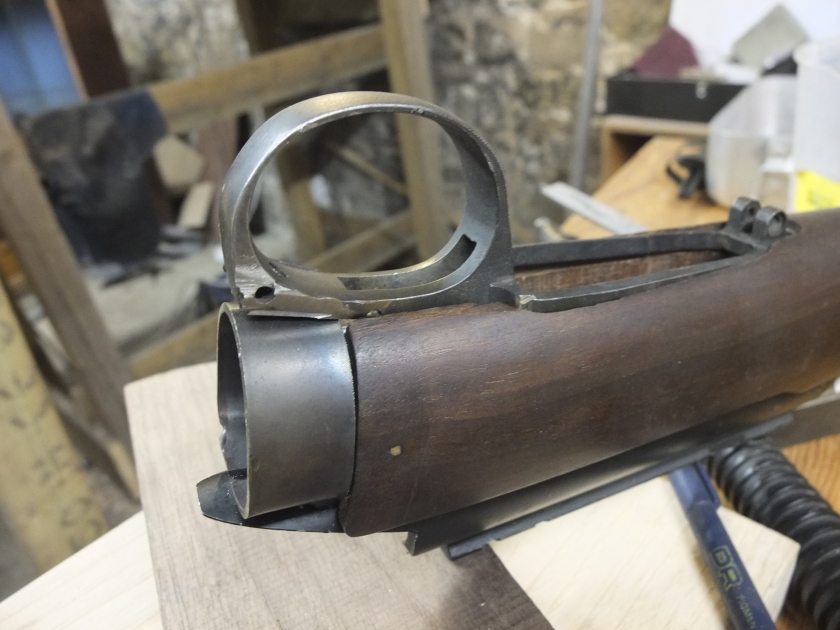 At this point, the action sat well enough in the receiver. By the taking of the next photograph I had also welded in the nut into which the bolt that holds the buttstock in place is screwed.

You can also see the new trigger, during the attempt to combine the original trigger and an Enfield trigger the original was all but useless. However this replacement is all-steel and a much better shape. It will need a little modification for comfortable use but it’s a good start and definitely an improvement on the donor! 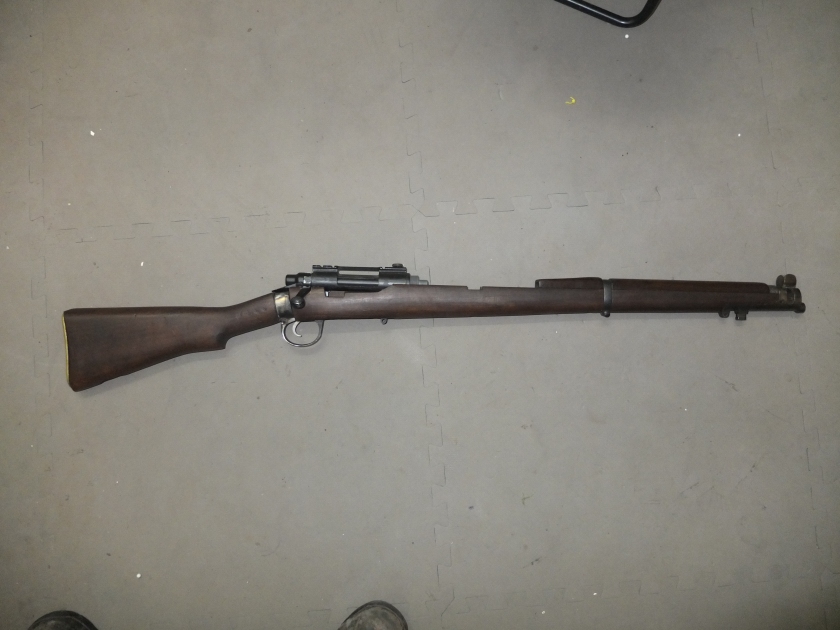 The magwell needed modification to take the M700 type magazine. With gas you need to be very precise: Not only does the BB feed need to line up (and this type of rifle is very picky about that) but the gas release valve on the magazine must line up with the trigger mechanism AND the gas port must line up with the bolt. In the end I decided to cut the magwell over-size and fill the gap with polymorph plastic. This has the added benefit of not being affected by moisture so it won’t swell and grip the magazine as I have seen some rifles do. 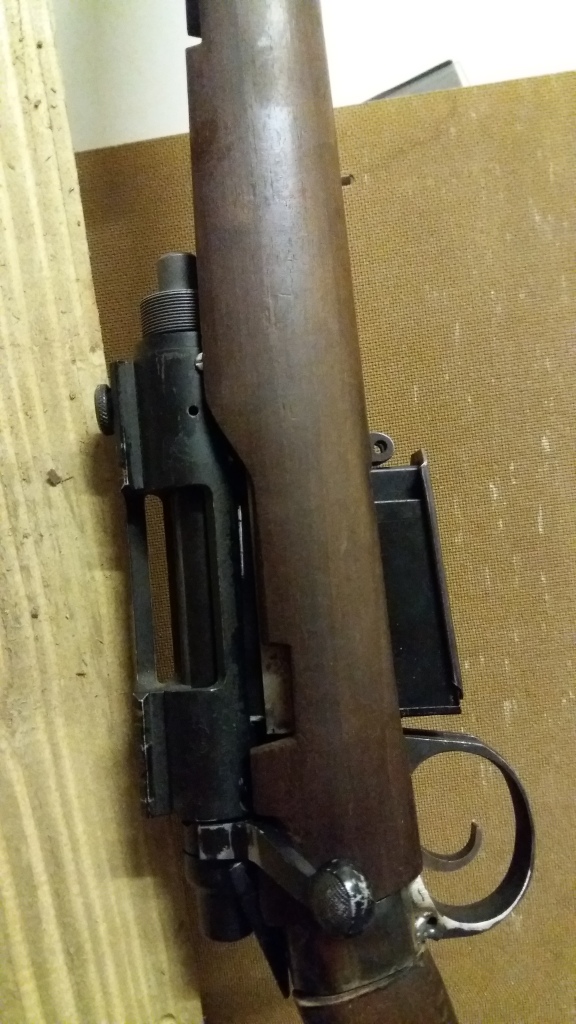 I then needed to re-fit the barrel, having made a new hop-rubber for it. The donor has a weird R-hop style hop unit as standard, I may change it to a more typical AEG hop at some point. The rear sight is secured by polymorph at the moment, with a tiny trace of glue to stop it spinning. This will be replaced before use with a screw into the woodwork. 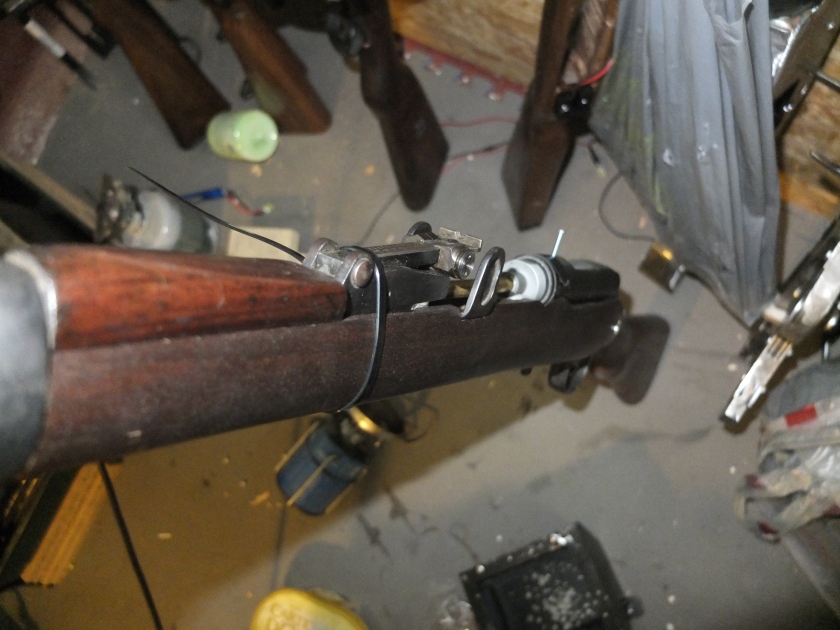 At the muzzle end the barrel is secured with a piece of steel turned to the correct size to fit the nose cap. It also holds the foresight in place by friction. As you can see in the next picture the inner barrel pokes out.

Eventually this will be trimmed down to size and re-crowned but for now it is difficult enough to chrono it already without making it harder to line up! 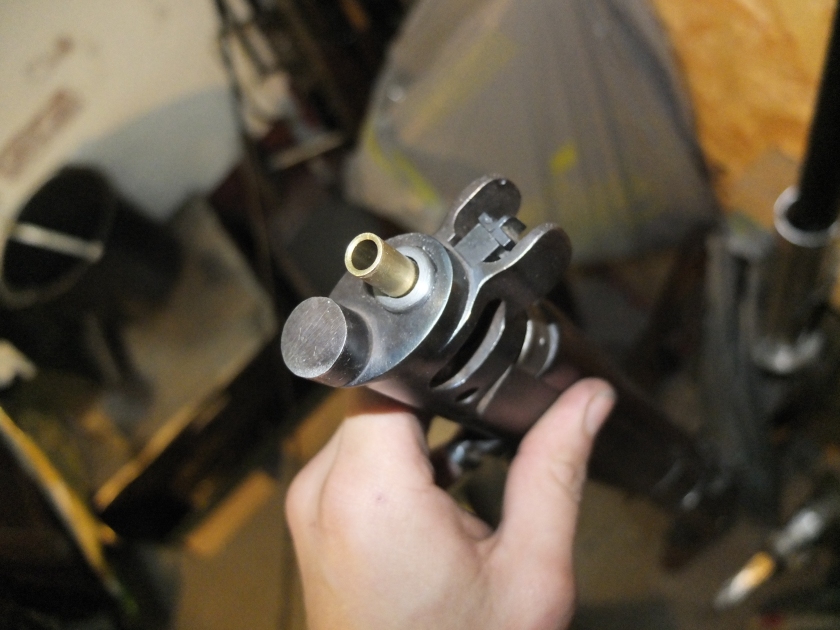 Aside from the bits mentioned above, there’s only a little to do.

Next I have to finish the hop-up adjustment unit, make a new top rear hand guard as the original doesn’t fit the gas receiver. It will then be usable, subject to gas control and a couple of Enfield parts.

The new top rear hand guard in place, before finishing. 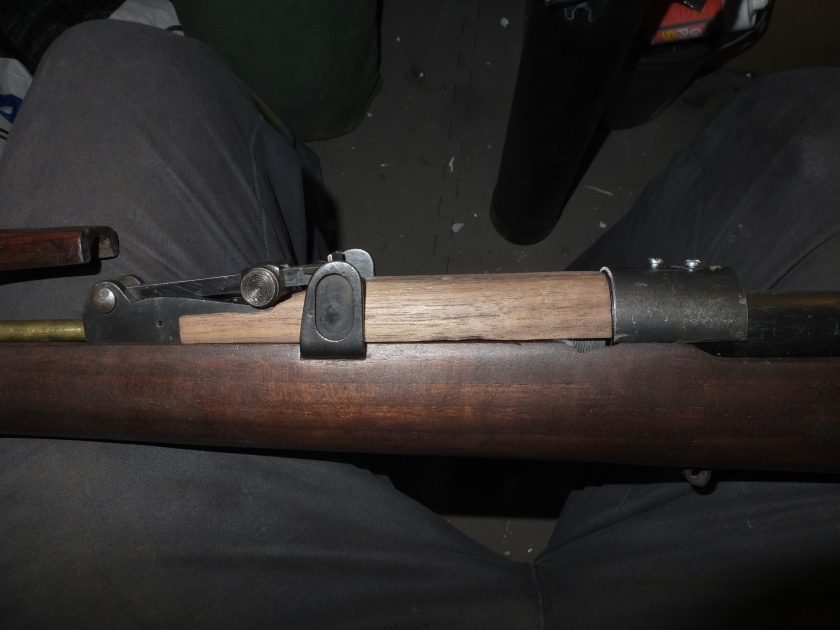 And another view, showing the receiver. Over the front of the receiver is a steel plate. The rear screw holds it in place, using one of the threaded holes that holds the scope rail on the original rifle. The front screw is the hop adjustment. I will have to replace these with some better-looking screws before use!

The top guard is sanded and oiled to finish it and protect it during use.

Some last bits of finishing to do to make it usable and I’ll get some photos up in the next week or so! For now I’ll just be happy to have a usable rifle, but in the longer run I plan to make some modifications to the receiver to make it look more authentic such as cutting out a charging slot for the thumb and mounting a charging bridge at the back. That or make this receiver into a Lee-Metford prior to the CLLE upgrades!