So far I have built the main body of the MG08/15 (see here). The next step was to build the plate that supports the gearbox unit and hop. This bit isn’t pretty but it will be functional!

Two bolts secure the plate fore and aft. At present I have left the heads on for ease of dismantling but these will be filed down for finishing so as to be more discrete. 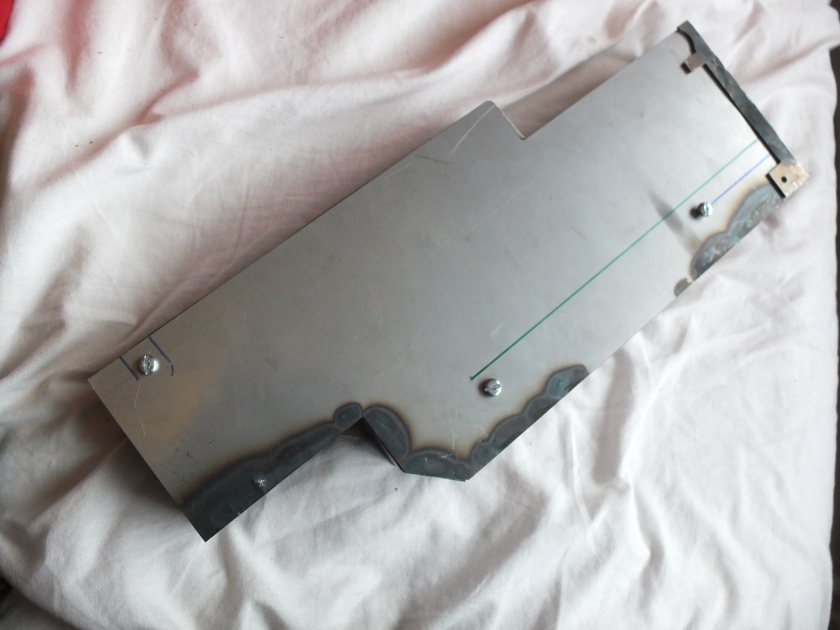 Side view, plate installed. The green line shows the level of the motor plate.

I also installed the top cover, a piece of 2mm sheet formed to the shape of the top. This is hinged at the front, I’ll have to create a catch at the back to hold it in place.

The hop is a custom-designed one in order to fit the space and feed from a place that is suitable for the magazine (the top as it happens).

Space between motor plate and the bottom of the shell.

In this space the trigger mechanism will be going! That is the next stage….

The tricky part of designing the trigger mechanism for this was getting the safety switch to operate the correct way around. A reasonable bit of re-jigging was required but I got there eventually! Again, the components will be laser cut.

As ever, if this post has inspired you at all for your own project or custom build let me know! Drop us a line to discuss it on: enquiries.vintageairsoft@gmail.com

A client recently contacted me and asked about the feasibility of building an Airsoft Welrod. This is a project I have wanted to do for some time so I came up with an initial design within three days and have revised it a little since then.

Anyway, a brief history of the Welrod is in order:

By the Second World War, the science of suppression was pretty established. Suppressors had been made for the Maxim gun and were available for automatic pistols. However, the noise of the action cycling was an issue with suppressed automatic pistols and British clandestine forces (and indeed Resistance movements throughout Europe) required something more discrete.

The answer came from Major Hugh Reeves of the Special Operations Executive’s Station IX, where a great number of novel inventions came to life. He designed the rather ugly Welrod Model 1. In .32 ACP this design had a few shortcomings:

Just to confuse you, there is also a MkI Welrod, which looks a little more like the pistol people recognise today:

Featuring a trigger guard for the more conventional trigger and a grip safety, this design had many features that appealed to the end users. It did however still look a bit gun-like, which for secret operations isn’t greatly desirable!

So, a re-design was in order and led to the MkII and MkIIa. This is the Welrod people recognise, it uses the magazine as the grip and is a simple bolt-action using a knurled round grip to operate it rather like the MkI. 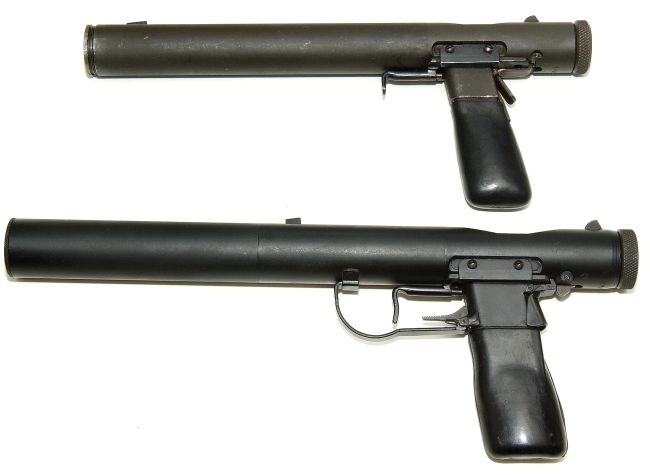 Due to the removable nature of the grip magazine, this version was significantly easier to hide, the main body of the tube was affectionately named the ‘bicycle pump’ for obvious reasons. When taken apart it could easily hide in a cyclist’s pannier or a plumber’s toolbox and be quite unidentifiable to the untrained eye, made less obvious by the deletion of the trigger guard.

The MkII/a was available in .32ACP and, perhaps more sensibly on the continent, 9mm Parabellum, the standard round of many German submachine guns and handguns.

The nature of the suppressor is also definitely worth a mention here. As well as the usual close-fitting metal rings found in a normal suppressor that eliminate various pitches of sound, the Welrod contained a number of rubber washers with a hole in the centre, just *slightly* smaller than the round that passed through it. This makes the suppressor extremely effective, if a little less accurate! Most Welrods were measured to make about 73db of noise.

Obviously a weapon designed for secretive use such as this gets little mention in the annals of history. However, there are suggestions that as well as extensive use with the SOE and Resistance movements through Western Europe, a US version saw service with several of their forces in the Far East not only in WWII but also possibly in Vietnam. Some sources suggest that Welrods were used as late as the 1991 Gulf War by British Special Forces, as well as in Ireland and the Falklands.

If any of you are familiar with the stay-behind units of NATO designed to slow down and harry the Soviets in event of war (Gladio teams), Welrods also featured in their weapons caches.

So much of this is of course, somewhat speculative. There are many rumours and tall tales about who was issued these unusual guns, and they add a romance to a story that a suppressed Browning Hi-Power just doesn’t quite carry…

My aim today was to get the shell of the main body assembled, using the parts from the laser cutting. Overall it was quite a successful afternoon’s welding with the new welder! 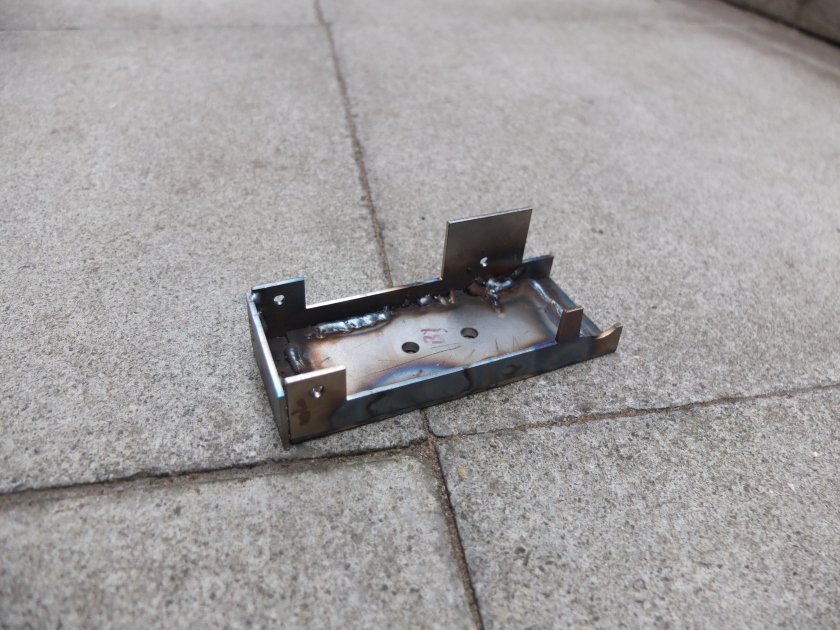 Yesterday and today I have been working on the trigger mechanism housing for the M72 rocket launcher. 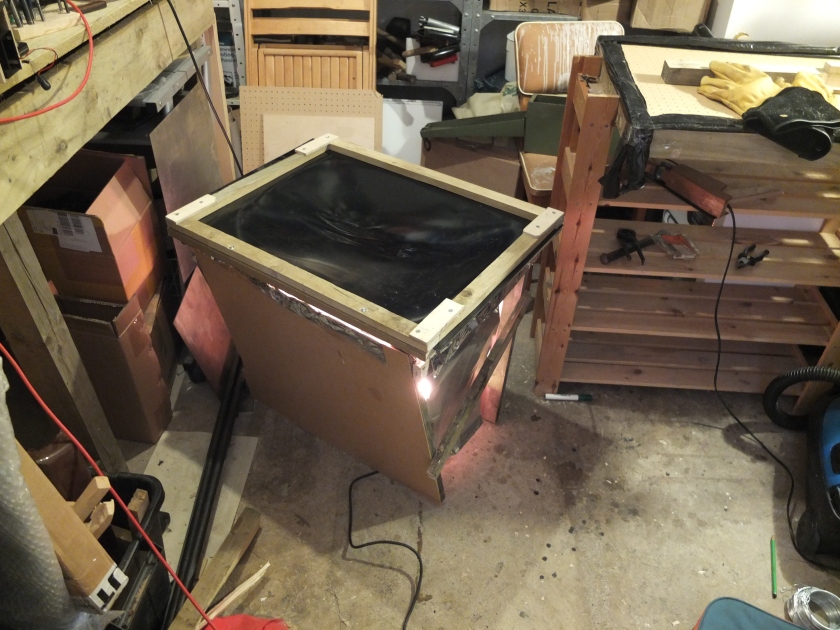 I started off by heating the plastic on my home-built vacuum former heater, which was very effective except for the outside 10cm of the plastic which was frustrating as this was exactly where the edge of my mould sat at both sides! If I had been switched on instead of enjoying the exotic fumes produced in my under-ventilated workshop I would have moved the mould so that it sat diagonally rather than straight but what’s done is done! 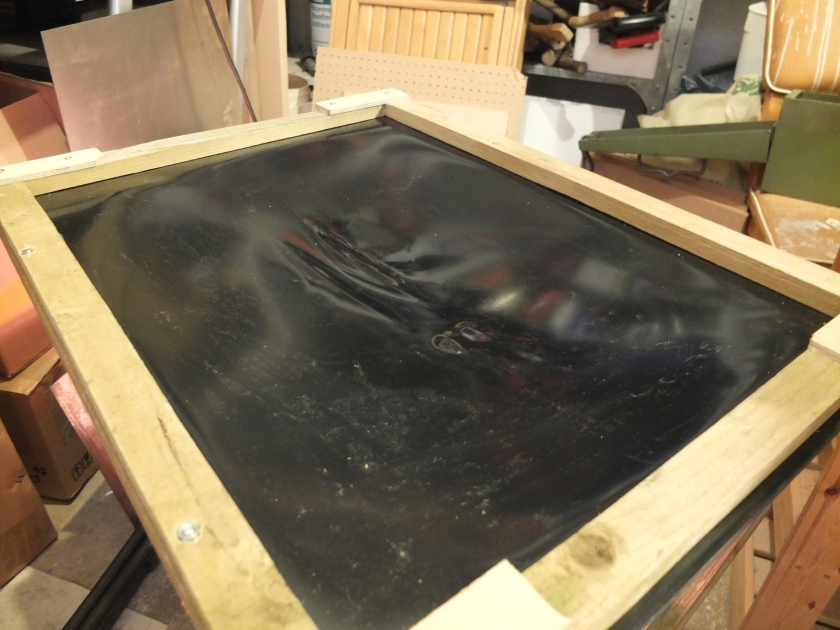 After a few false starts I got the plastic soft enough to work and formed the rough shape. However either the seal wasn’t good enough, the suction too weak or the mould not being well ventilated enough to pull in the plastic onto the details.

As a result I spent this afternoon with a heat gun and a short plank pushing the plastic onto the form.

Looking a bit tidier now though I say so myself!

In future I’m seriously considering just building this part from fibreglass like the original, I doubt it would take as long and it can’t be more unpleasant fumes-wise!

*DISCLAIMER* Don’t try this at home, parts of this build are not good for your health and come with a fire risk built in.

Last week the laser cuttings arrived so after a delightful holiday in the New Forest and attending the Battle of Aachen (at Combat South) I decided to start marking the pieces up for welding.

Having designed the parts some time ago it’s quite a challenge trying to remember what goes where sometimes! As a result I thought it would be good to match up and have opportunity to check everything before welding it permanently.

Below: Back panel and buttstock holder.

More to come when some welding has been done!

As ever, if this has inspired you to want a project of your own drop me a line on the usual email address! enquiries.vintageirsoft@gmail.com

A chap on the British WWII airsoft forum asked if anyone had made a suppressor for their Sten, so I obliged to do a post on my prototype silencer!

As with all my Sten kits (released and in development), I wanted to make this a temporary attachment that could be removed when not wanted. 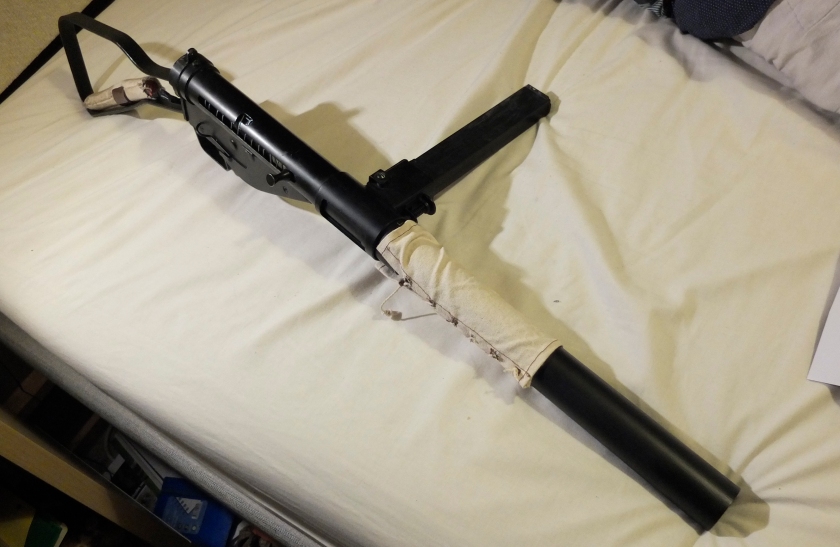 So, how did I make this?

One piece of 40mm OD (Outside Diameter) mild steel pipe makes up the body of the suppressor, nothing fancy about this at all! Inside this prototype there are two square pieces of plywood with holes through the centre. 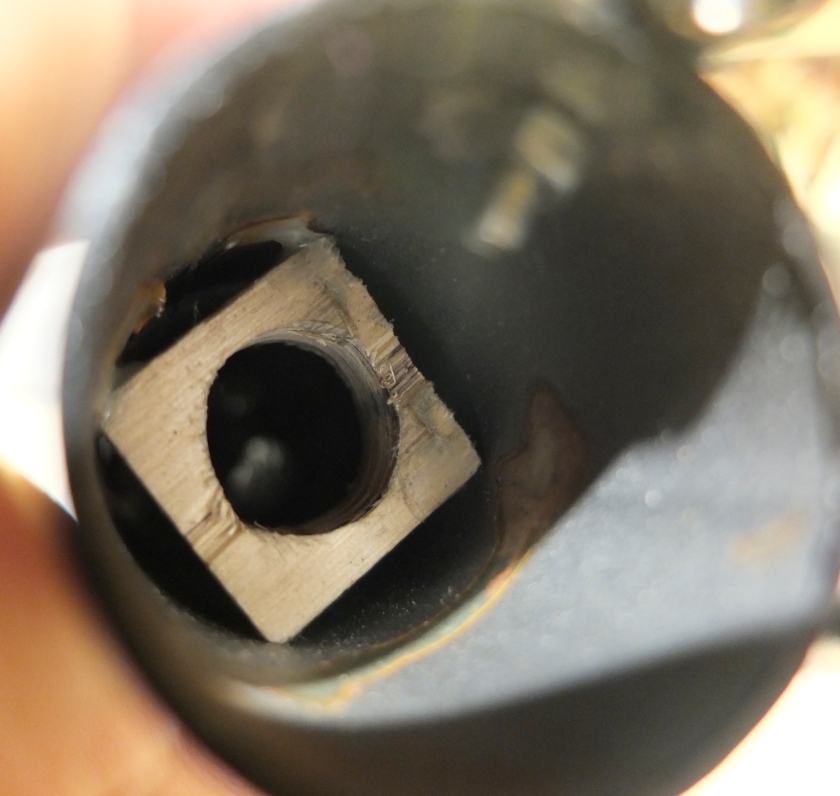 These slide over the outer barrel of the Sten and fit very snugly indeed. This makes for a very solid silencer as it has all of the strength of the inner barrel to support it.

The end cap is a piece of ash, cut to rough shape. I heated a spare section of 40mm tube and used it to cauterise the rough cut cap into shape. Now I have the lathe of course I’d just turn it on that! A little epoxy will secure it in place.

As the weight of the suppressor is taken by the outer barrel, all that is needed to keep it in place is a retaining screw. I used the screw hole that the heat guard uses on the standard ASG Sten.

A small piece of brass flat bar bridges the gap, obviously this could also be steel.

Once the canvas heat cover is on, it camouflages this admittedly unsightly joint!

On this prototype I’ve just stitched the buttonholes roughly, I’ll be putting in some brass eyelets when I have bought a punching kit!

One thing to bear in mind with this conversion, it is aesthetic ONLY. In no way will this quieten your AEG down as most of the sound is created in the motor and doesn’t really travel down the barrel.

The finish is a combination of enamel paint and matte lacquer so that the metal and wood parts match up.

The production version of this will differ in a few ways:

1. The end cap will be entirely turned on a lathe for shaping

2. The barrel supports will either be plastic or turned round so that they fill the entirety of the barrel

3. The heat shield will have brass eyelets instead of sewn ones

Production versions will be around £50, a post will be forthcoming on completion of the first model! If you fancy a version of this, do drop us a line on: enquiries.vintageairsoft@gmail.com!

I got a chance to test my loop stock prototype at the WWII game at Combat South this month, I needed something a bit more comfortable than the T-stock (and frankly better looking!). I took some photos before I had chance to clean the gun after use.

This prototype is made of flat bar mild steel, I’m working on a way to source and bend some C/U section steel but if it isn’t possible the flat steel doesn’t look bad and is easily stiff enough for use.

As ever, skirmishability comes tied with authenticity on the priority scale. I have provided a plastic brown clip to take the standard stick battery which is concealed in a canvas ‘sock’.

Although painting the connectors black makes the battery arrangement less visible, I plan to conceal the wires/connectors a bit better in a production version as they are a little unsightly. The problem is that the battery wires are actually a little too long but I will find a solution!

For production I will probably leave the canvas sock plain and allow people to colour them to match webbing or uniform as desired.

As ever, if this post has given you an idea for a project do drop me (Dom) a line on the usual email address: enquiries.vintageairsoft@gmail.com.