Mention the No.5 Lee-Enfield rifle and you will always get a reaction. It is one of the most controversial British small arms, beaten only by the SA80 system and the EM-2.

The idea of the No.5 was to create a shorter, handier and lighter version of the British service rifle, the Enfield No.4. This had already seen some upgrades from its predecessor the No.1 MkIII. Contrary to popular belief, this effort to lighten and shorten the Enfield design was not specifically to aid in jungle fighting (though this was clearly on the Empire’s radar) it was, in fact to provide Airborne troops with a rifle less awkward to carry in the confines of an aircraft. 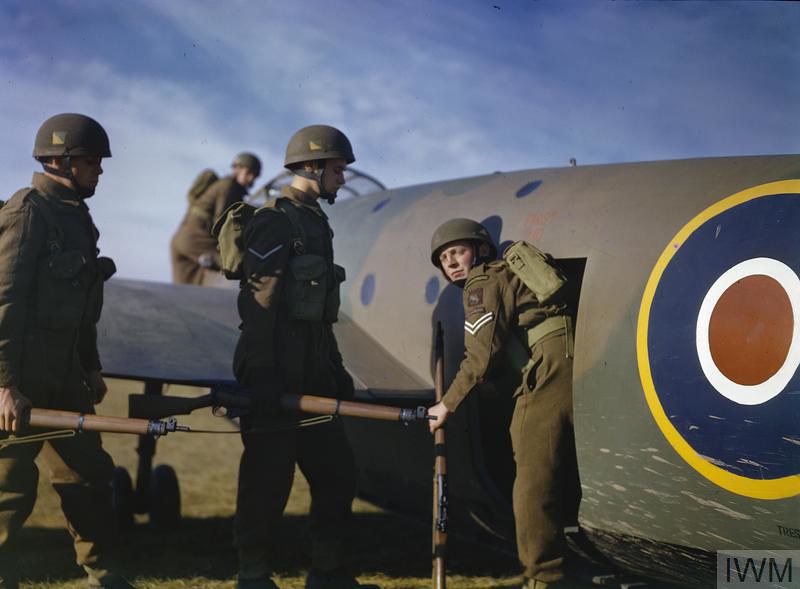 Climbing into a Hotspur glider during training. Although glider design improved on this compact format you can see where the desire for a handier weapon came from.

This it certainly achieved, it is around 2lbs (0.9kg) lighter and nearly 5″ (125mm) shorter. Most of this saving was achieved by shortening the barrel, though also through lightening cuts around the receiver to remove excess material and lightened versions of certain components (such as the bolt handle and trigger guard/magwell). 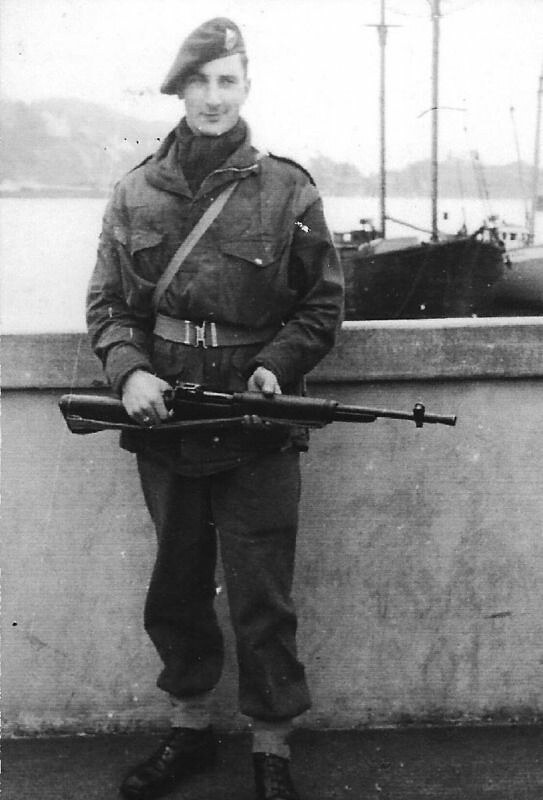 As a result of this shortened barrel, a flash hider was added. The length of the standard rifles meant that most of the .303 cartridge load was effectively used and produced only a (relatively) usable muzzle flash. The No.5 however has a significant muzzle flash, which could be blinding to the shooter in low-light conditions. The flash hider is not actually there to hide the flash from the enemy, it’s to hide it from the user. 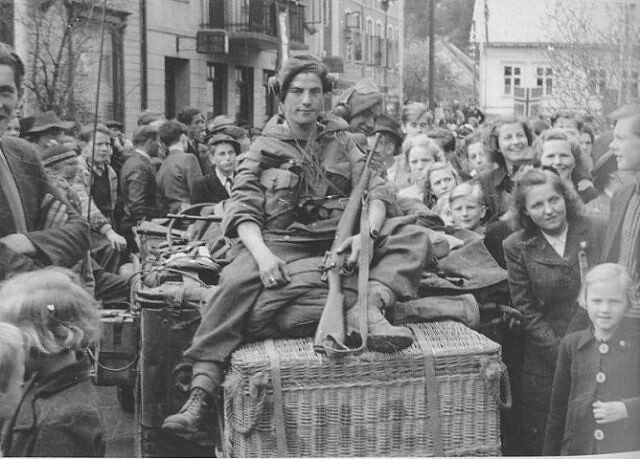 As a result of the lightening, perceived recoil is also greater. To counteract this, the designers added a rubber butt-pad in place of the traditional brass or steel plate. A good idea, except that they made it very small, a bulging pad missing out a lot of the butt’s surface area. So that increased perceived recoil was forced into an even smaller part of the shoulder. Thank goodness it was comfy, soft rubber right? Err, well concerns around durability meant that a pretty hard rubber compound was used. Not great at the time and 70 years on they have only grown harder. 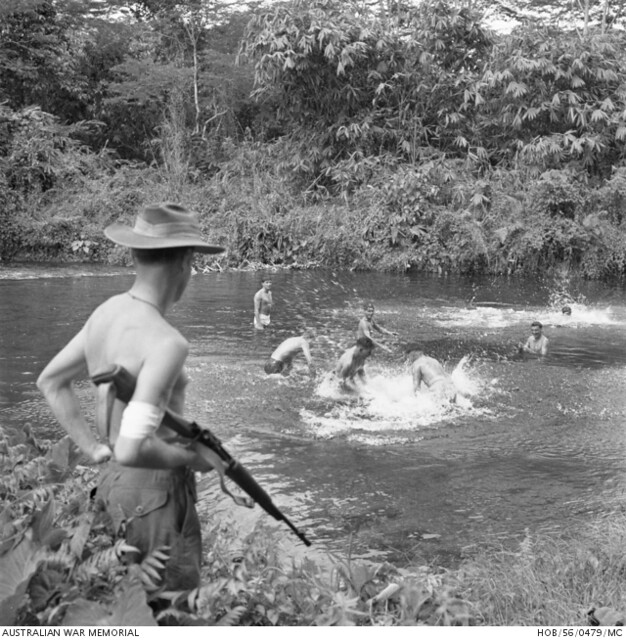 The controversy was that these rifles allegedly suffered from a ‘wondering zero’. This means that once sighted in, the rifle would not hit the same aimed point consistently. This was the reason the War Office gave for discontinuation of No.5 production in 1947, only three years after is was introduced. This makes it one of the only military service rifles to be outlived by its predecessor.

Several aspects of the rifle design have been suggested as causes including:

-The lightening cuts causing the receiver to flex when fired. This could cause headspace issues or inconsistency between shots over time

-The flash hider if fitted incorrectly or damaged may cause gas imbalances around the projectile, allowing shots to wonder of their typical course

Modern No.5 MkI owners have been unable to reproduce this wondering zero effect, which makes it look likely that this was only given as an excuse to shift bolt-actions to the rear echelons and give them in aid to allies to speed up introduction of the self-loading rifle that every other major power was adopting or had already. 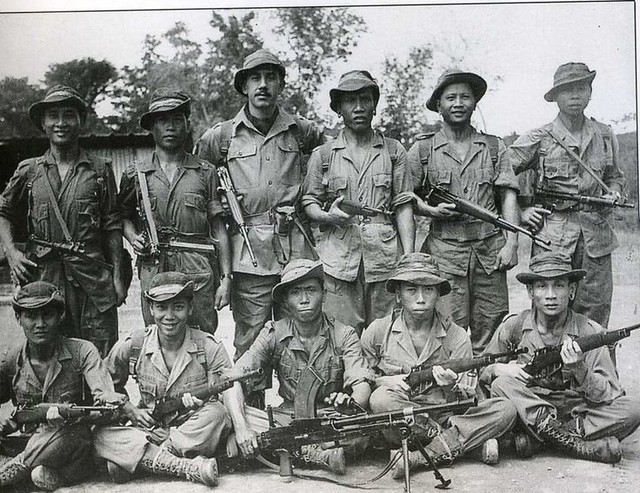 Nevertheless, the No.5 saw limited service in Northern Europe, notably during the liberation of Norway, but most of its service life was post WWII, in Korea and Malaya, where they were not only used by British troops but also local forces. 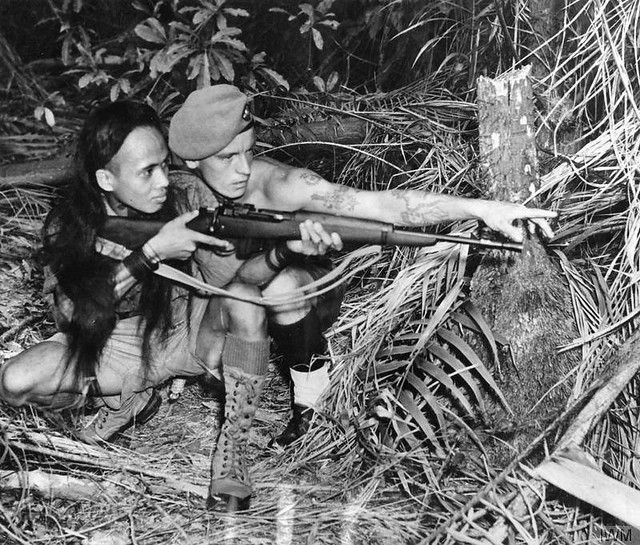 For an outline on the No.5 MkI, see Ian’s video at Forgotten Weapons.

For some in-depth information, see C&Rsenal’s article on the rifle, including how to spot the many fakes available.

When the build posts go up, you can see the progress here. 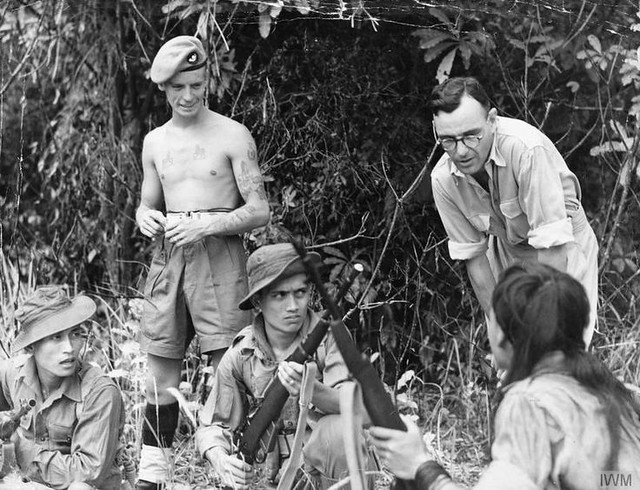 If enjoyed this piece or have an idea of your own, drop us a line on enquiries.vintageairsoft@gmail.com to discuss. ‘Like’ our Facebook page or follow the blog to get regular updates on projects and interesting videos and articles.

Don’t forget you can buy some of our complete products via Etsy.

The buttstock I am using for the No.5 is a damaged SMLE stock, as a result I don’t feel guilty about the chopping I’ll be doing to it!

I make the rear band unit in the same way as in all the other Enfield builds: ERW beaten to shape and welded to the trigger guard. 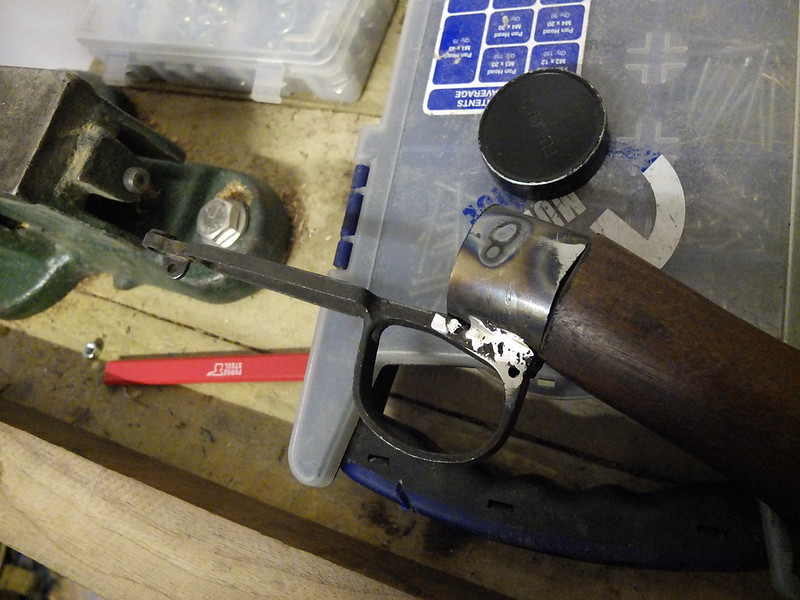 The No.5 trigger guard/magwell housing is slightly different to the other Enfields, being thinner and lighter. This makes it an even more awkward shape to cut out! 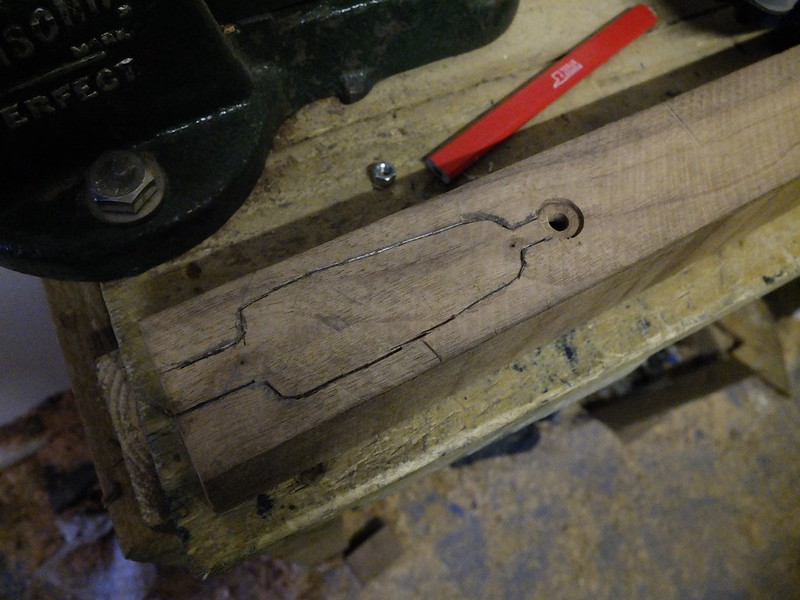 The VSR gets its special parts added. The standard Vintage Airsoft quick-load VSR magazine well and the Enfield trigger that takes the trigger back into the correct location. I’ll also be using the TDC mod for this rifle of course, along with the Enfield bolt mod. 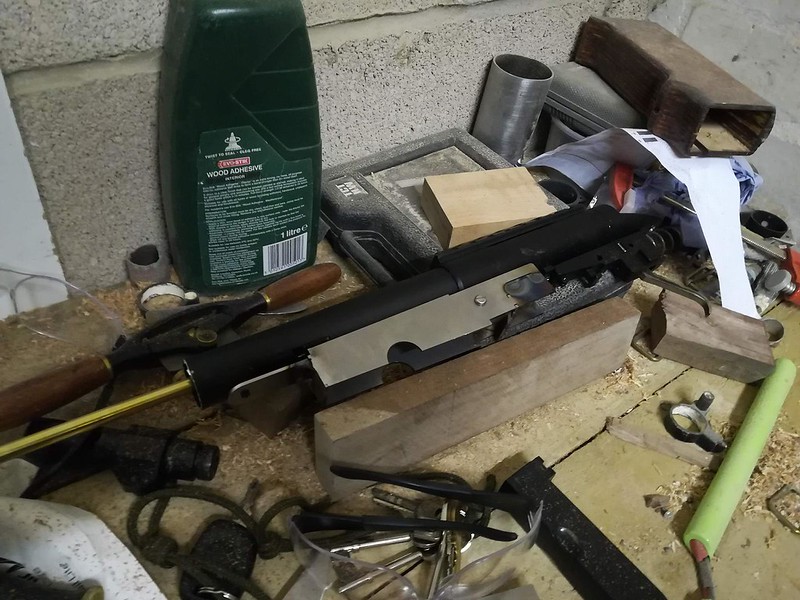 In place in the roughed out stock, the gun already starts to take shape. 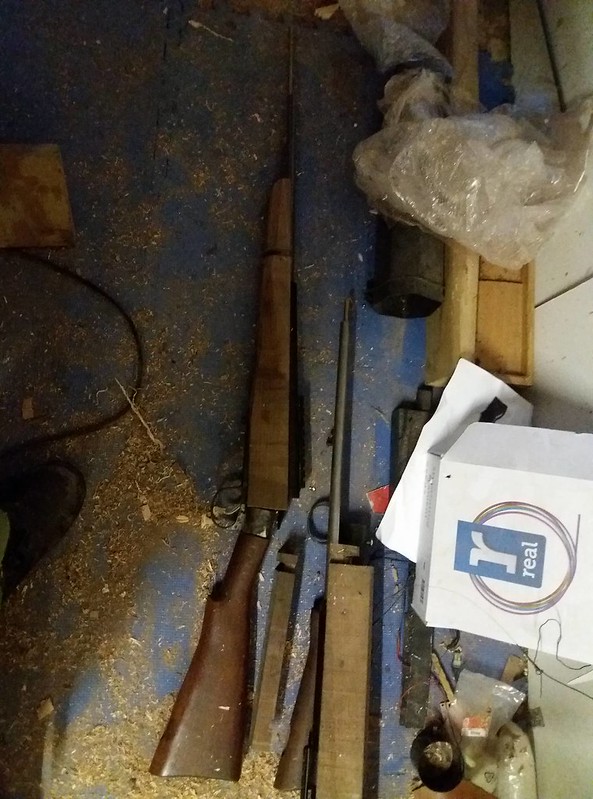 I smooth out the shape and improve it a little. I still have to finish the back end where the receiver fits and around the rear band. 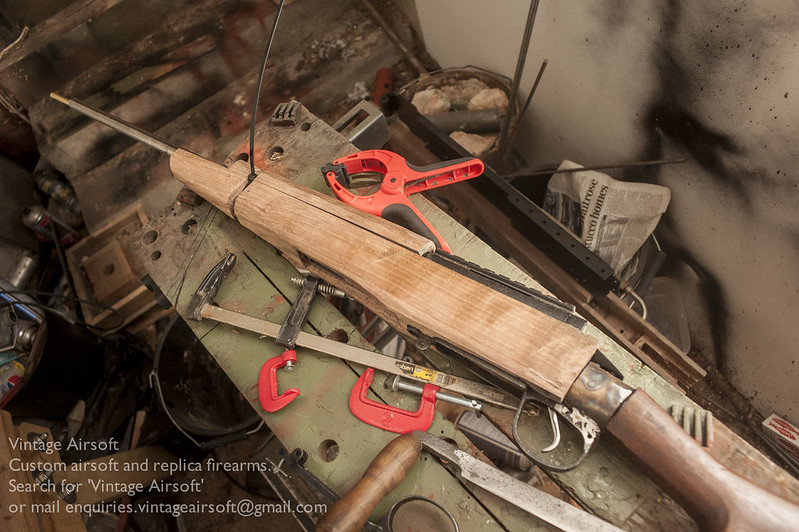 At the front I need to create space around the outer barrel as it is free floating on the original. The top guard also needs rounding off at the front. 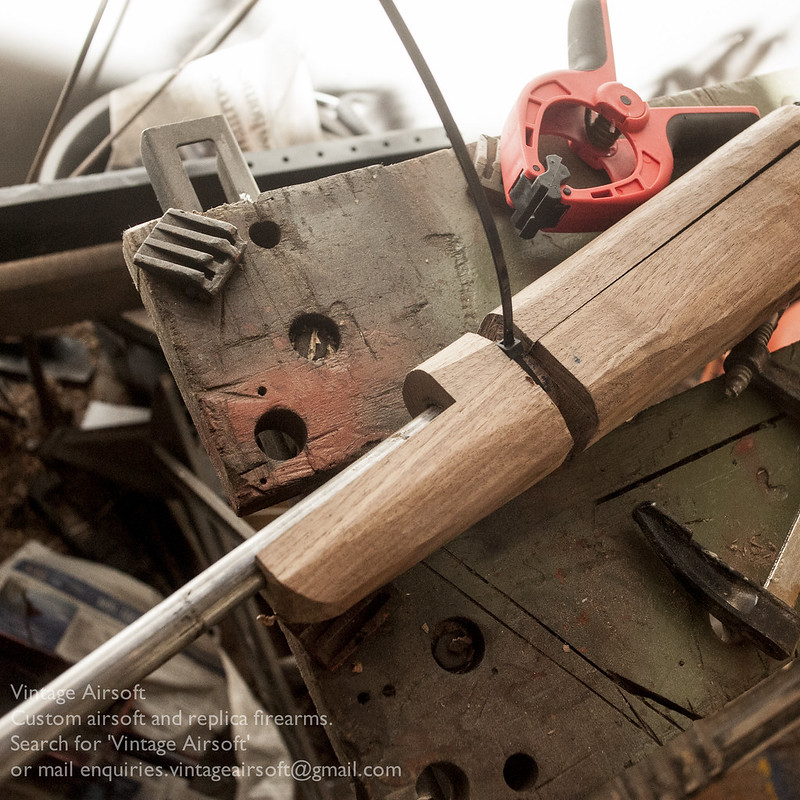 Working on the receiver now, no standard typeface is quite right for the markings. I find some clear images to work from and create a file I can work from and tidy up in Qcad.

Once the basics of the typeface have been finished up, I transfer them onto the side of the receiver to be 3D printed.

I got the muzzle brake/foresight unit 3D printed. As well as looking the part it also holds the inner barrel centred nicely. It’s held in place with two screws that lock it in place through grooves in the top of the barrel. 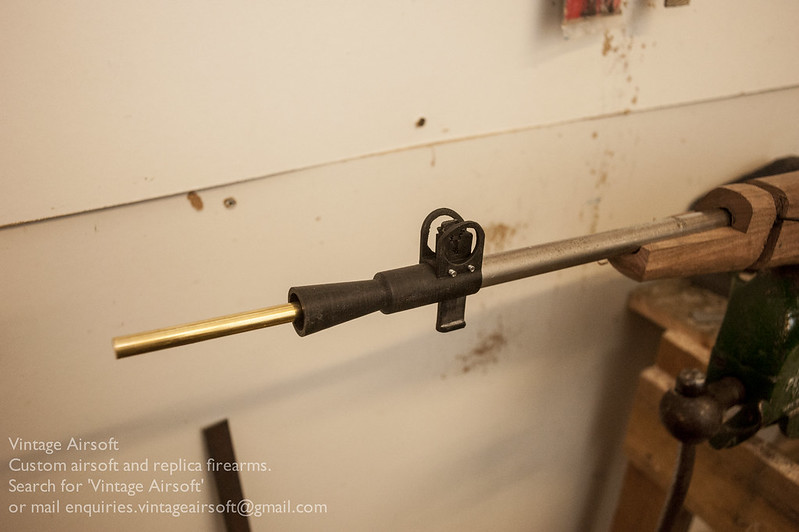 The outer barrel is secured in the ‘traditional’ way for my VSR builds. 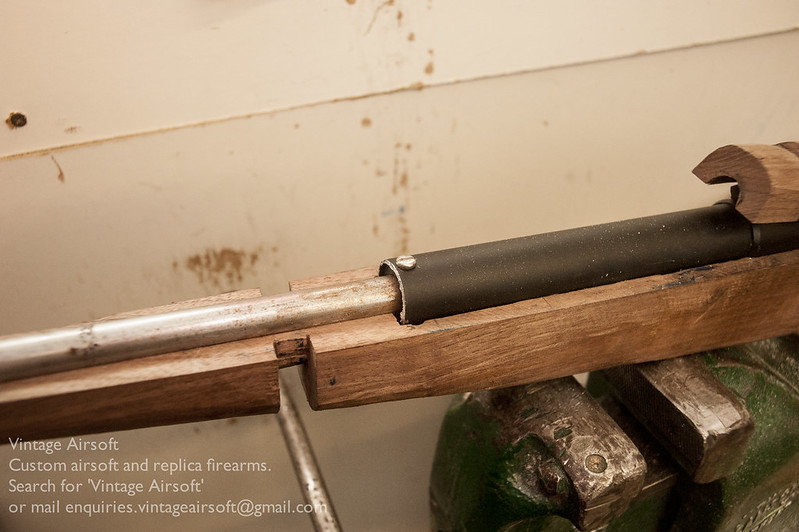 I’ll have to spin up the barrel on the lathe to clean it and get a consistent polish, then I can oil finish it which will be nice and wear-resistant. 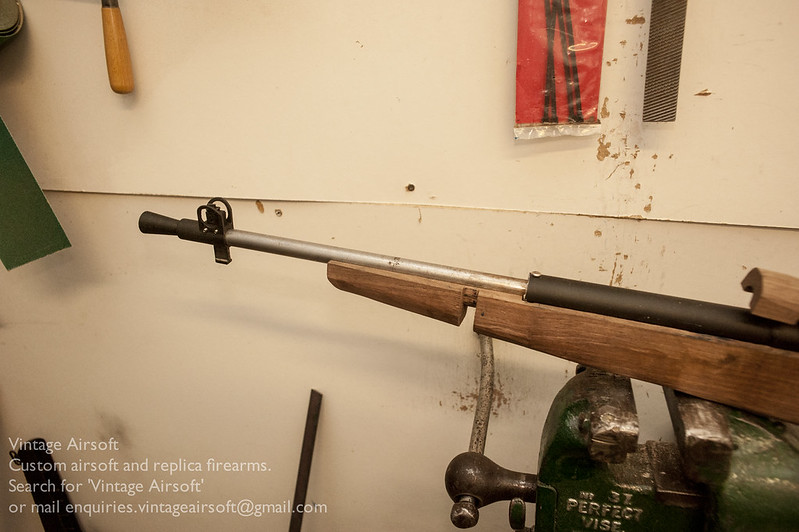 Polished up and oil finished, the only problem is the muzzle brake doesn’t look as good now! You will also notice that the inner barrel has been cut down and re-crowned on the lathe by this point. 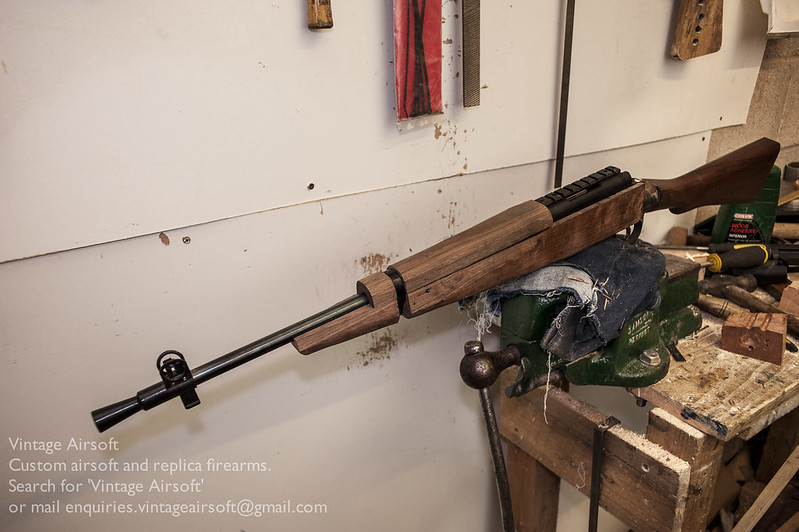 At the back end, I start the modifications to the butt. 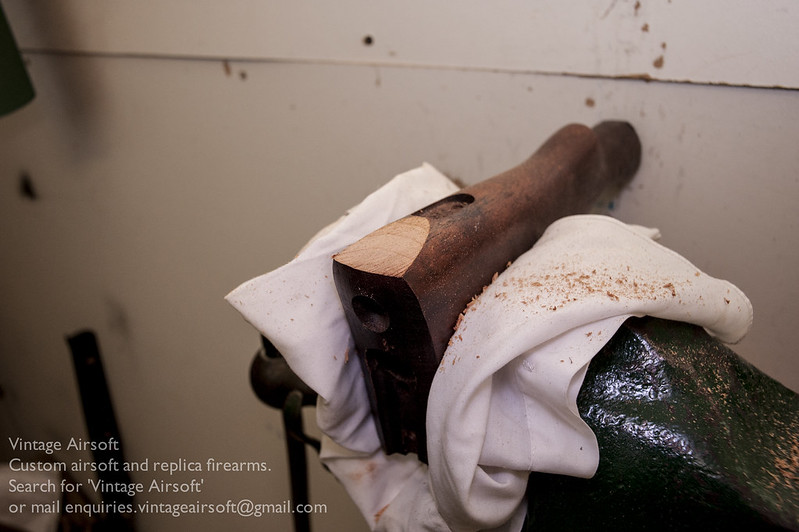 The buttpad and cage have been 3D printed and are fitted by hand to the wood. 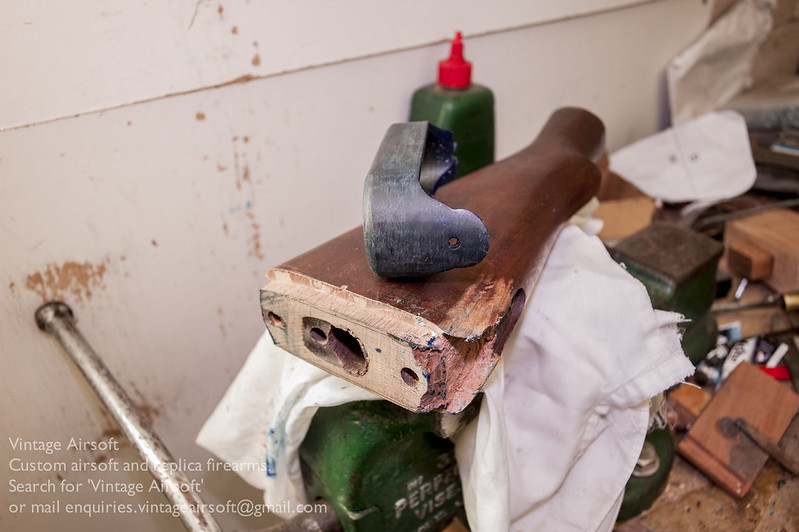 I’m fairly pleased with the standard of the fit. The buttpad cage is a little more fragile than I would ideally like so some tinkering may be needed. 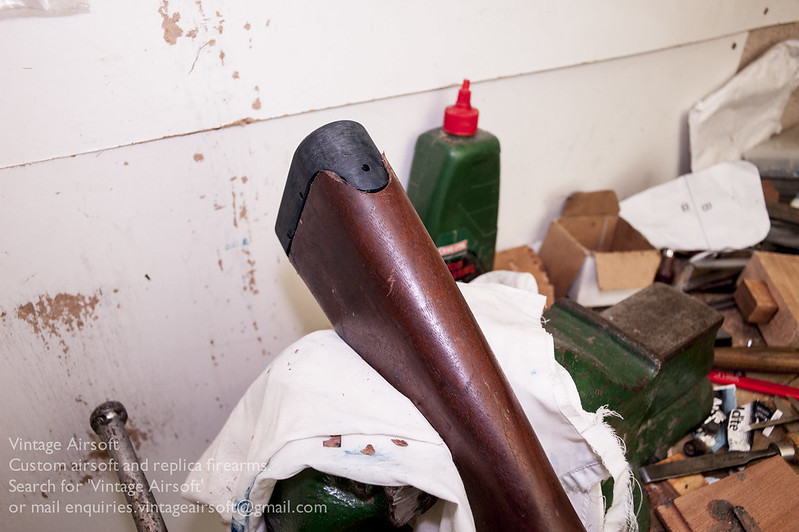 I carved out the recess needed for the sling loop in the buttstock. 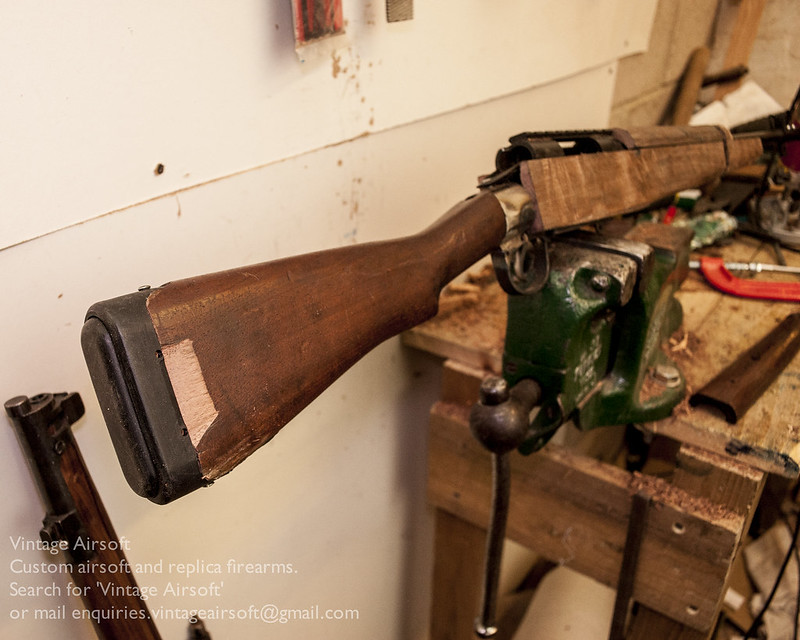 The assembly so far. The receiver needs fitting, plus there are some finishing bits to do. Inevitably there will be a bunch more things that I can’t think of right now. I am very excited to finish this build and get her in the field!